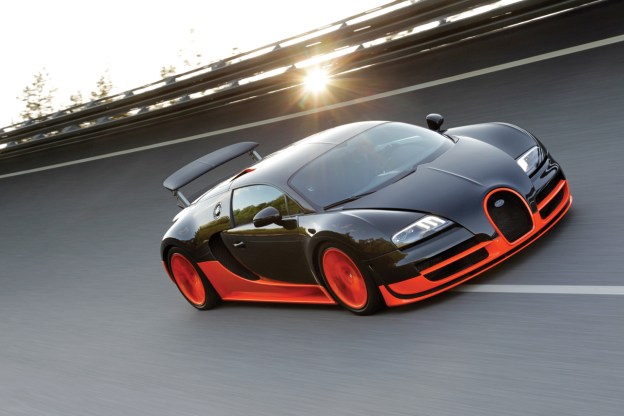 You may remember the Guinness Book of World Records declaring the Bugatti Veyron Super Sport the world’s fastest production car in 2010. You may also remember the Hennessey Venom GT coming very close to beating the Veyron’s record recently.

Yet neither of these cars are the fastest production car in the world, Guinness says. While the numbers don’t lie, neither the Veyron SS nor the Venom GT meets the world record authority’s standards for a “production car.”

The Veyron SS was declared speed king in 2010 after clocking 267.8 at Volkswagen’s top secret German test track. However, Bugatti deactivated the car’s electronic speed limiter for the record run. Veyron Super Sports sold to customers are limited to 258 mph.

Guinness considers this a modification, and since cars going after speed records can’t be altered in any way, the Veyron SS has officially been disqualified.

A certain car builder in Texas was probably very happy to hear this news. The Hennessey Venom GT, a modified Lotus with 1,244 horsepower, recently hit 265.7 mph.

So will the Venom be taking the Veyron’s place in the Guinness Book of World Records? Nope; Guinness doesn’t consider it a production car either, because Hennessey hasn’t built enough copies.

To qualify for the record, carmakers must build at least 50 examples of a contender per year. Hennessey hasn’t even built 10 Venom GTs.

SSC has talked about building a second, more powerful model to take on the Veyron SS, but that is now redundant. No one likes to win based on a technicality, though.

Meanwhile, Bugatti is reportedly working on a new model. Maybe it will set a new speed record while satisfying Guinness’ rules.

Is Guinness being fair, or did the Veyron SS deserve to lose its crown? Tell us in the comments.

Nissan reinvigorates its 370Z with 750 hp and a carbon fiber diet
Porsche’s updated 911 gets the one thing it was missing: A manual transmission
Toyota gives its sweet, race-ready Supra the green flag for production
Hyundai upgrades its Veloster N with the best the aftermarket has to offer
Tesla recalls 130,000 U.S. vehicles over touchscreen safety issue
Mercedes issues urgent do-not-drive recall for 292,000 SUVs
Bluetooth hack compromises Teslas, digital locks, and more
EV glossary: All of the electric vehicle jargon you need to know
How do electric cars work? EV motors and batteries explained
SpaceX announces Starlink for RVs, with no wait for dishes
Waze finally adds Apple Music to its audio player
Insta360 cameras take a speedy ride around Monaco’s F1 track
Buick announces plan to go all-electric with stunning EV concept