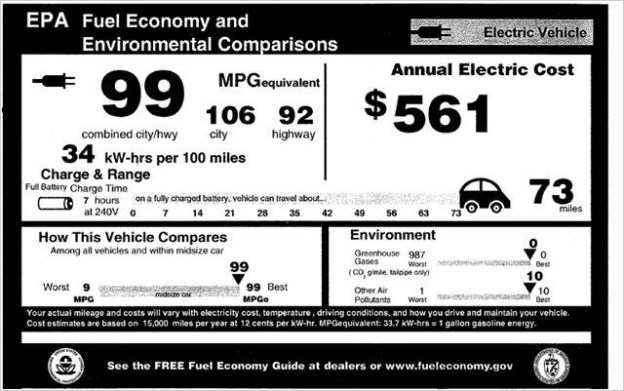 How can a car that requires no liquid fuel get 121 miles per gallon? That’s exactly the paradox you’ll encounter when looking at the window sticker of a 2013 Scion iQ EV which, in the Environmental Protection Agency’s (EPA) fuel economy tests returned 121 MPGe (miles per gallon equivalent) combined.

When the Chevrolet Volt and Nissan Leaf launched in 2010, the EPA thought it would be a good idea to update its ratings for non-liquid fuels. With more battery electric vehicles (EVs) and plug-in hybrids hitting the market every year, it’s an increasingly important task. Here’s how the EPA gives electric cars fuel economy ratings.

Comparing apples to apples, and kilowatt-hours to miles per gallon

It’s important to remember that electricity has its own efficiency scale. In addition to putting an EV’s MPGe on the window sticker, the EPA includes kilowatt-hours per 100 miles (kWh/100m). On said window sticker, you’ll find this number in small print, to the right of the car’s combined (big print), city, and highway MPGe numbers.

Taking a second look at the Scion, we see that it’s rated at a much more reasonable sounding 28 kWh/100m combined. For another example, take the more mainstream Leaf: it’s rated at 99 MPGe, but only 34 kWh/100m (both figures combined).

So, since the Scion uses fewer kWh to travel 100 miles than the Nissan, it’s more efficient and gets a higher MPGe number.

Why bother with MPGe then? Kilowatt-hours per 100 miles is the electric equivalent of miles per gallon, but that’s helpful only if you’re comparing electric cars. With so few EVs available to consumers right now, that seems unlikely. It also creates a problem for plug-in hybrids.

It’s difficult to come up with a hard and fast fuel economy metric for plug-in hybrids because, on the average drive, they can operate as EVs, gasoline cars, or both. That’s why General Motors calls the Chevrolet Volt an “extended-range electric vehicle,” not a hybrid. Fisker does the same with its “EV-ER” (electric vehicle, extended range) Karma.

Whatever you want to call it, you’ll see two fuel economy figures on a plug-in hybrid’s window sticker. On the left is MPGe, and on the right is gasoline-only miles per gallon. Below the boxes that list the fuel economy numbers is a bar with the car’s range; electric-only range is highlighted.

MPGe describes the energy efficiency of a fully electric car and half of the fuel economy equation for a plug-in hybrid, but what exactly is one MPGe?

Making things even more confusing, the answer involves yet another form of measurement. The EPA uses the standard conversion of 115,000 British thermal units (BTU) per U.S. gallon of gasoline as the basis for its MPGe metric.

When a U.S. gallon of gasoline is burned, it releases the equivalent of 115,000 BTU. Since BTU is a measure of energy, it can be used to directly measure electrical output. In this case, 115,000 BTU is equal to 33.7 kWh.

When an electric car draws 33.7 kWh of electricity from its batteries it has used the energy equivalent of one gallon of gasoline. Take the Leaf: it requires just over 33.7 kWh (34 kWh, to be precise) to go 100 miles, so it gets a rating of 99 MPGe.

What does it mean?

Unfortunately, none of this will be much help on the dealership lot unless you consider your priorities first. Specifically, you need to think about whether emissions or low fuel cost is more important to you (and do some homework), and try to get a feel for how you’ll be using the vehicle.

MPGe allows you to compare electric cars to conventional ones, but an EV or plug-in will almost always be more efficient than a gasoline or diesel vehicle. What other types of cars do you know that can get 99 mpg?

Consequently, MPGe is a better yardstick for fuel savings than for vehicle-to-vehicle performance. If you know the distance of your daily commute, you can calculate how much fuel you’ll use in each potential purchase.

To help your wallet feel even better the EPA also includes annual fuel cost and fuel savings figures on window stickers. However, these numbers are calculated based on the national average of 11 cents per kWh, and an assumed 15,000 miles per year driven. Obviously, your mileage can vary, and so can your electricity rate. Check with the power company before taking the EPA’s numbers for granted.

What about emissions? The EPA rates cars on a scale of one to 10, but there’s more to this than meets the eye. If you charge your Leaf with a homemade windmill, you have nothing to worry about. If you plug it into a wall outlet, things can get a bit complicated.

Because electric cars get their power from greenhouse gas-emitting power plants, they indirectly contribute to pollution. This varies by region, but you can use the EPA’s nifty greenhouse gas emission calculator to get an exact number.

For example: Rolling out of General Motors’ Detroit-Hamtramck, Michigan assembly plant, a 2013 Volt emits 300 grams per mile (g/mile), but in Portland, Oregon it only emits 200 g/m.

Your mileage may vary

This is a disclaimer that has to follow any fuel economy estimate, and it’s especially important when it comes to EVs and plug-in hybrids. Charging stations aren’t exactly plentiful, and charging a dead battery still takes at least a half hour. If batteries are all you’ve got, plan your trip carefully.

Juggling two fuel economy numbers and two range estimates doesn’t make life much easier when you have an onboard gasoline engine to supplement those batteries. It’s hard to know how much of a given drive will be done with electricity, but the EPA’s unofficial user mpg tallies (available with the official ratings at fueleconomy.gov) can at least give you an idea of what other drivers are experiencing.