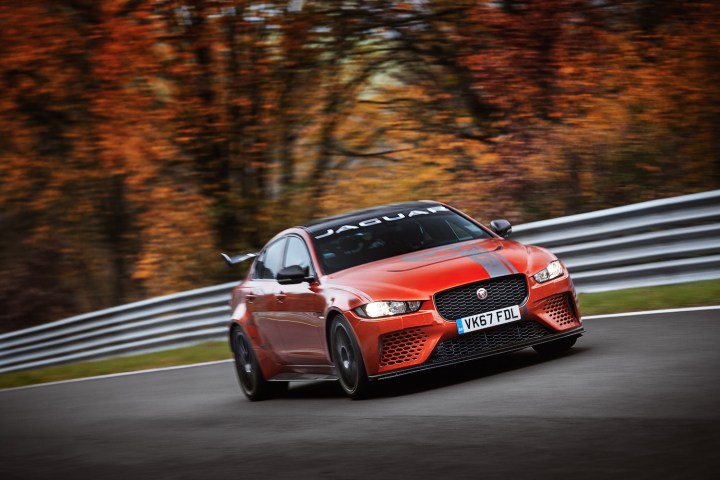 Jaguar’s Special Vehicle Operations (SVO) skunkworks will follow up its insane Project 7 and Project 8 limited editions with a new car code-named, you guessed it, Project 9. But aside from deciding to build it, the automaker hasn’t made a final decision on anything else about the Project 9.

“There will be a Project 9,” SVO boss John Edwards told Top Gear. “But there’s not decision on what it will be yet.” The Project 7 and Project 8 are both performance cars, but Edwards said Jaguar could go in a different direction with the Project 9.

“It doesn’t necessarily have to be high performance,” he said, “we’re making up the rules as we go along.”

To recap, Jaguar (and sibling brand Land Rover) created SVO in 2014 to handle special projects like limited-edition versions of existing models, personalization jobs for customers, and Jaguar Land Rover’s classic-car program. SVO caters to wealthy customers with unlimited expectations and bank accounts, and the “Project” vehicles show off everything it can do.

SVO started with the F-Type Project 7 in 2014. Despite being the first of the breed, it got the name “Project 7” as a reference to Jaguar’s seven 24 Hours of Le Mans victories. Its styling was inspired by the car responsible for three of those victories: the D-Type. Jaguar later decided to build new versions of the actual D-Type, which makes the Project 7 a bit less special in retrospect. But with a production run limited to 250 units, it is very rare.

Jaguar went in a completely different direction with the XE SV Project 8, which was unveiled last year and starts production in June. Instead of a retro sports car, the Project 8 is a brutish version of the XE sedan that boasts a 592-horsepower 5.0-liter supercharged V8 and plenty of downforce-generating aero addenda. The Project 8 has already lapped the Nürburgring in 7:21, and has a top speed of 200 mph, according to Jaguar. Production will be limited to 300 units, priced at $188,495 in the United States.

Limited production runs, extroverted styling, and serious performance seem to be themes of the “Project” vehicles. But given how different the Project 7 and Project 8 are from each other, it’s hard to predict what the Project 9 will be. But we’re eager to find out.