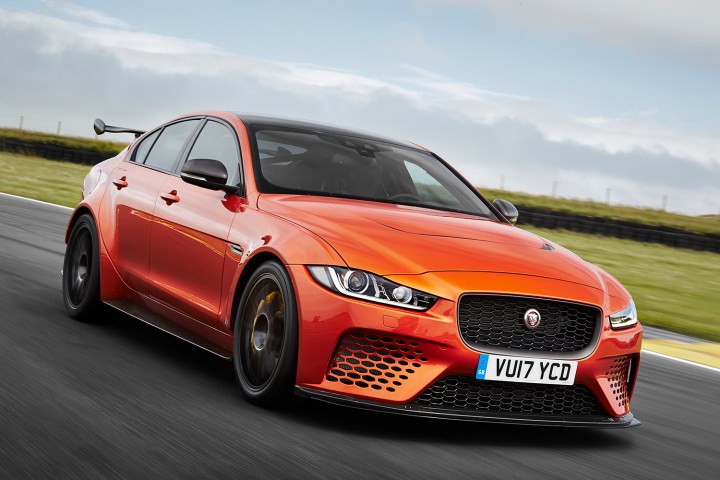 The utterly bonkers Jaguar XE SV Project 8 super sedan is scheduled to enter production in June, but Jaguar engineers are still making changes. This hot-rod version of Jaguar’s XE small sedan is one of those rare cars that focuses purely on performance, and the team at Jag’s Special Vehicle Operations (SVO) skunkworks doesn’t seem to want to let it go.

In case you need a refresher, the XE SV Project 8 is powered by a 5.0-liter supercharged V8 that produces 592 horsepower and 516 pound-feet of torque. An eight-speed automatic transmission and all-wheel drive harness that power, allowing the SV Project 8 to sprint from 0 to 60 mph in 3.4 seconds, according to Jaguar. It will also do 200 mph, and lap the Nürburgring in 7:21, Jaguar says. But only 300 customers will get to experience that performance.

“The good thing about building only 300 cars, all handmade, is that you can keep developing the car right up to the start of production. And we’ve done just that,” Project 8 vehicle dynamics manager David Pook said in a statement. Over the past few months, engineers have stiffened the springs and engine mounts to improve handling, tweaked the brakes to improve pedal feel, and made changes to software, Pook said.

On a normal production model, such last-minute tweaks might focus on reducing wind noise or smoothing out a transmission’s shifts. But the Project 8 is no ordinary production model. The only body parts that carry over from the standard XE are the roof and front door skins. SVO replaced the hood and fenders with new carbon fiber components, added a big rear wing, front splitter, and flat underbody to generate downforce, and equipped the Project 8 with a racing-style adjustable suspension system.

The Project 8 will also be the first Jaguar with a driver-selectable “Track” mode, which sharpens throttle response and puts the dampers into their most aggressive setting. Outside North America, buyers will be able to order a Track Pack that deletes the rear seats, and replaces the front seats with carbon fiber racing buckets equipped with four-point harnesses. Jaguar says this saves 27 pounds and increases torsional rigidity by 27 percent, but it kind of defeats the purpose of a four-door sedan.