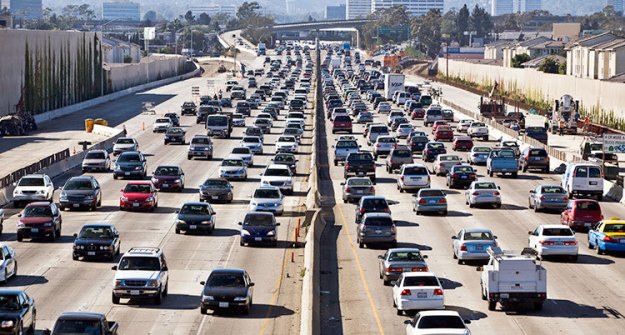 The second most populous city in the nation is bracing for an 11 mile closure of the popular I-405 freeway this weekend. Interstate 405 is the main artery of travel for the West Side of Los Angeles and typically handles half a million cars every weekend. The section of freeway is scheduled to be closed for 53 hours starting on 7 p.m. Friday night through 6 a.m. Monday morning to add carpool lanes as well as 18 miles of sound walls. Electronic billboards are warning residents of Los Angeles and San Diego to expect massive delays if using the I-405 freeway. This is a portion of a road-widening project that’s costing the city $1 billion dollars. If the contractor (Kiewit Infrastructure) doesn’t finish in time, they will have to pay $6,000 every 10 minutes for each side of the freeway that remains closed.

The center that manages the Los Angeles freeways, Caltrans, is using its Traffic Management Center to manage the flow of traffic during the closure. The center is planning to utilize over 400 cameras, vehicle-tracking sensors fixed in the road and airborne CHP officers to prevent traffic congestion. The Los Angeles Emergency Operations Center will also be in operation, a facility that typically handles natural disasters. Businesses are expected to suffer this weekend as employees will have difficulty reaching the workplace. Hospitals in the UCLA area are setting up dorm and hotel rooms for employees.

The Los Angeles police department turned to celebrities with large Twitter followings to promote awareness of the freeway closure last month. Celebrities included Lady Gaga, Kim Kardashian, Demi Moore and Ashton Kutcher with a collective Twitter following of 30 million people. Kutcher responded to the LAPD request with a request of his own in jest, a free pass on a red-light ticket.

Citizens of Los Angeles have been encouraged to download a free application called Waze for Android, iPhone and BlackBerry phones. After a user starts Waze, the app actively tracks the speed of the car with the GPS. This information is relayed back to Waze and plugged into the constantly updating map on the screen. Traffic jams are identified by a red line covering the roads on the map. Users can also report events immediately like accidents, hazards, police checkpoints and even open parking spots. Users can also upload photos to alert other users of Waze the reason behind traffic congestion. Waze also offers immediate re-routes based on the crowdsourced, user-generated data, a service likely of great use during the I-405 closure.