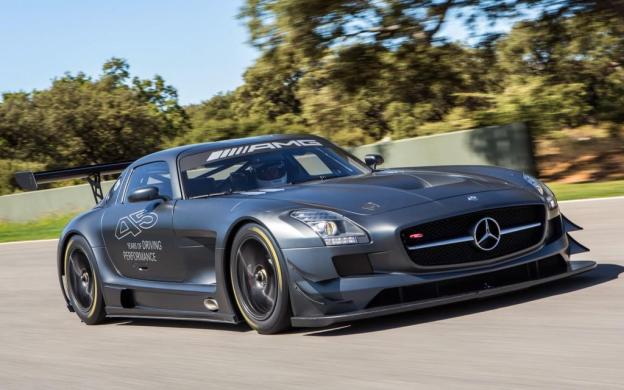 As the performance division of Mercedes-Benz, AMG will always hold a special place in the hearts of car enthusiasts. So in celebration of its 45th anniversary, AMG decided to give itself not one, but two presents. First came the special edition SL65 AMG roadster which was unveiled in April, but as if that wasn’t good enough, here comes the gull-winged, race-ready SLS AMG GT3 45th Anniversary Edition.

This SLS may share its stealthy matte gray paint (officially called magnito graphite) with the anniversary edition SL, but it’s a completely different animal. The former was a trim package for the already-potent SL65 street car, but the GT3 is a bona fide racecar that a (select few) mortals will be able to buy.

AMG will build and sell five of the race-prepped SLS GT3s, which will be identical to the cars that competed in the 2011 FIA GT3 Championship. That means the car’s 6.2-liter V8, which produces 583 horsepower in a stock SLS AMG GT, will be tuned to produce more than 600. That power will be channeled through a race-spec six-speed sequential transmission.

The SLS AMG GT3s will be set up by Bernd Schmeider, five-time DTM (German Touring Car) champion and AMG brand ambassador. Buyers will get a certificate and, more importantly, optional driver training at the AMG Driving Academy. The SLS GT3 is not street legal, so they’ll need to invest in a trailer as well.

Anniversary Edition SLS AMG GT3s get the obligatory “magnito graphite” everywhere, including the wheels and roll cage. Like any self-respecting racecar, each will also have a number (45) on its door. However, the numbers won’t be painted on; those areas will be left bare to expose the car’s carbon fiber bodywork.

So, like the SL65 Anniversary Edition, this commemorative SLS GT3 will be identical to the car it’s based on, except for paint and graphics. Normally, special edition models with new paint and nothing else are a bit of a rip off, but in this case, buyers will undoubtedly feel like they came out ahead.

The five SLS AMG GT3s will sell for roughly $579,000, which is $64,000 more than a “regular” SLS GT3. Is matte gray paint really worth that much? Given its history of building great cars, from the 300CE “Hammer” to the SLS itself, AMG shouldn’t have trouble finding five fans, with or without racing licenses, to buy these outrageous anniversary presents.

Obsessive attention to detail makes the Ferrari 488 GT3 Evo faster on track
The 2020 Mercedes-Benz GLB is a junior G-Class with room for six of your friends
2021 Mercedes-AMG GLE53 coupe is an SUV that wishes it was a sports car
Mercedes-AMG teaches the tech-savvy 2020 CLA 45 how to breathe fire
Tesla recalls 130,000 U.S. vehicles over touchscreen safety issue
Mercedes issues urgent do-not-drive recall for 292,000 SUVs
Bluetooth hack compromises Teslas, digital locks, and more
EV glossary: All of the electric vehicle jargon you need to know
How do electric cars work? EV motors and batteries explained
SpaceX announces Starlink for RVs, with no wait for dishes
Waze finally adds Apple Music to its audio player
Insta360 cameras take a speedy ride around Monaco’s F1 track
Buick announces plan to go all-electric with stunning EV concept