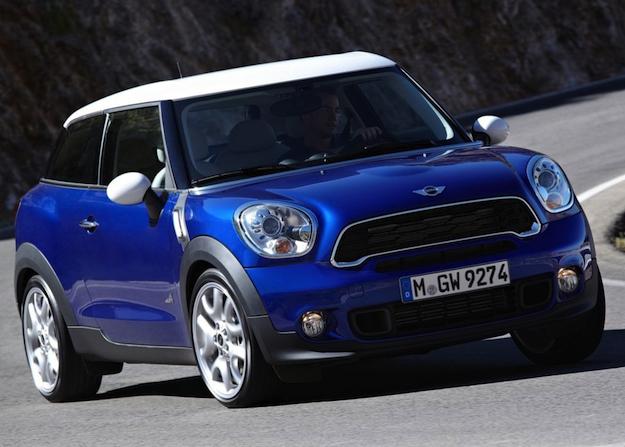 Fashionable and funky, the new Mini is a global automotive sensation, and rightly so; it looks good, drives brilliantly and the build quality justifies its price. BMW had no intention of leaving the brand alone though, and has subsequently rolled out several variations on the theme, including the cool Rocketman and Clubvan concepts.

From those vehicles that have made it to dealer forecourts, the Countryman is perhaps the strangest. For a vehicle named Mini, it’s big, and despite good genes, it’s ugly too. Yes, it’s practical, but those are looks only a mother could love.

But the Countryman has been to the gym, grabbed itself some new threads, and hit the streets as the Mini Paceman, the latest Mini to be announced and a coupe version of the Countryman. It’s not the first time we’ve seen the Paceman, as it has been part of the company’s plan for a while, and several leaked shots have given us a basic idea of what it will look like.

Its Paris Motor Show debut is our first proper look though, as it’s obviously sans camouflage, and the press shots are suitably glossy.

Let’s start from the top. The back-slanted roof that leads into a spoiler will be available in black, white or the same color as the body, and is attached to the car using black pillars to recreate the “floating roof” look seen on other models.

To further accentuate the coupe-look, the waistline curves up towards the roof at the rear of the car, and there are only two, long doors. The front is very similar to the Countryman, but there are plenty of changes around the back. Aside from the massive Mini badge and Paceman name tag, the car has been given horizontally-mounted lights — a first for the brand. The chrome surrounds won’t appeal to everyone, and the new light clusters do a good job of emphasizing the width of the car. Whether that’s a good or bad thing will depend on your taste.

The styling helps the Paceman look like less of a heffalump than the Countryman, but one has to question the practicality of a car this size with only two doors.

A choice of four engines will be available when the car goes on sale, starting with the 1.6 liter, 122 horsepower motor using either petrol or diesel, plus a 2.0 liter 143 horsepower diesel and finally, a 184bhp 1.6 liter petrol engine in the top-of-the-range Mini Cooper S Paceman. A John Cooper Works edition will join them in the future. Like the Countryman, Mini’s four-wheel drive will be an option, as will the company’s extensive range of customization options, plus the suspension has been tuned to offer sportier handling.

2023 Mercedes-Benz EQE SUV preview: The EV lineup grows again
Sporty Polestar 3 SUV is an EV guiding star
2023 Kia Niro EV first drive review: Practical doesn’t have to bore you to tears
Nissan wants the 2023 Ariya to be its comeback EV, but the bar has been raised
Uber says it’s investigating ‘cybersecurity incident’
Nvidia’s Drive Concierge will fill your car with screens
The Uber hack is an outrageous tale of a teen hacking for fun
Tesla to fix window software on 1M of its U.S. cars
Lux and refreshingly livable, Mercedes’ EQE moves EVs mainstream
How to watch Tesla’s AI Day tonight and what to expect
2023 Audi Q4 E-Tron first drive: the predictable and traditional EV SUV we need
We need more 7-passenger EVs, but the 2023 Mercedes EQS SUV has room to improve
Tesla AI Day 2022: Optimus, self driving cars, and everything else announced