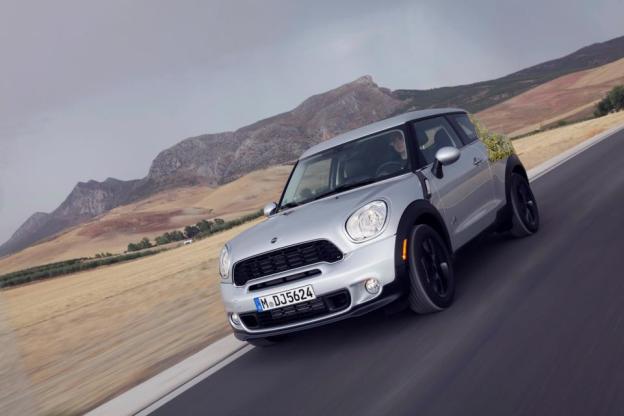 Mini describes its newest model as “a two-door powerhouse ready to roar onto city streets soon,” adding that, “it’s not a ride fit for wallflowers.”

While it’s hard to imagine one of Mini’s cute little cars “roaring,” the Paceman definitely makes an impression. It’s basically a Countryman with two fewer doors and a lower, more coupe-like roof line. It almost looks like a regular Mini Cooper that’s been pumped up with butch styling, like a Hot Wheels designer was working on it.

The flared wheel arches make the car look a little sportier, but mainly help prove that this compact two-door is still an SUV. You have to look at the size of the driver in relation to the car to realize that the Paceman is much larger than a Cooper Hardtop.

The C-pillars are the one area still covered by camouflage, so it’s hard to tell whether the Paceman will have the full helmet-inspired roof from the Countryman and Mini Coupe. Thin pillars would be better for rear visibility, and they would make the car look less top-heavy.

The production Paceman closely resembles the Paceman concept from the 2011 Detroit Auto Show. At some point, Mini decided to change the name of the car to Countryman Coupe, but has now gone back to Paceman.

The Paceman will be mechanically identical to the Countryman, so engine and transmission choices will likely be the same. The Countryman can be had with a 1.6-liter inline four with 121 horsepower and 118 pound-feet of torque, or a turbocharged version of the same engine with 181 hp and 192 lb-ft. Transmissions on the Countryman are a six-speed manual and six-speed automatic, with either front- or all-wheel drive.

With two less doors than its brother, the Paceman pares down the utility but dials up the style. Combining the iconic Mini styling with all-wheel drive and a less-mini cabin might be enough to attract buyers, even though this crossover will be lacking utility.

Will that be enough? We’ll find out early next year when the Paceman goes on sale, following a probable Paris Motor Show debut in September.