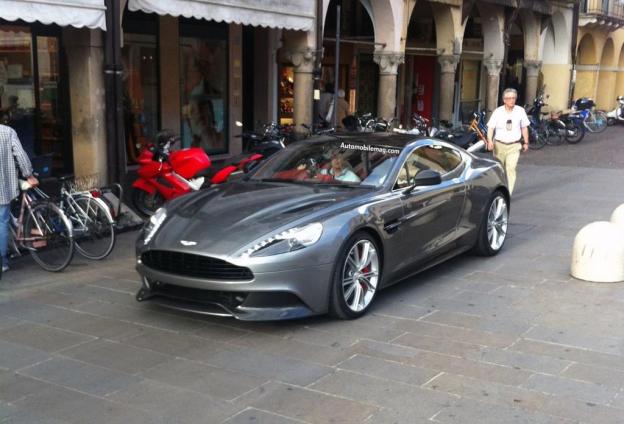 Aston Martin’s next sports car is supposed to remain under wraps for a few months, but the spies over at Automobile magazine caught an un-camouflaged prototype in public. The new car, which will replace the DB9 in Aston’s lineup, takes its styling cues from the AM310 concept, and will probably be called Vanquish.

The production car has the same general shape as the AM310, which was unveiled Concorso d’Eleganza Villa d’Este last month. The front end looks almost exactly the same, although the production car does not have the AM310’s eggcrate grille. It also retains the AM310’s bulging fenders, and the dramatic crease following the side vents.

This new Aston may look a lot like the old DB9, but that’s the point. The company did not want to mess with a good thing; since its current cars already have a distinctive look, Aston felt evolutionary styling was better than a clean-sheet design. The result is a familiar shape updated with details from the One-77 supercar.

When the AM310 was unveiled, Aston said a name change wasn’t out of the question. When it hits showrooms, the new car will be called Vanquish, as indicated by the badge on its trunk. The name was originally used between 2001 and 2007 on the company’s flagship, a more muscular alternative to the DB7. It was also the car driven by James Bond in Die Another Day. The Vanquish was replaced (both as the top-performing Aston and as Bond’s car) by the DB9-based DBS.

The new car will also be significantly lighter than its predecessors, thanks to a carbon fiber body draped over the DB9’s aluminum VH chassis.

The Vanquish will make its official debut this August at the Pebble Beach Concours d-Elegance, coinciding with Aston Martin’s 100th anniversary. Maybe then we’ll get a peak under the hood. The Vanquish may not look too different from current Astons, but it does look good. If it’s as good to drive as it is to look at, this should be one great car.

The best Aston Martins of all time

Aston Martin’s DBX SUV has a luxurious interior, and a price to match