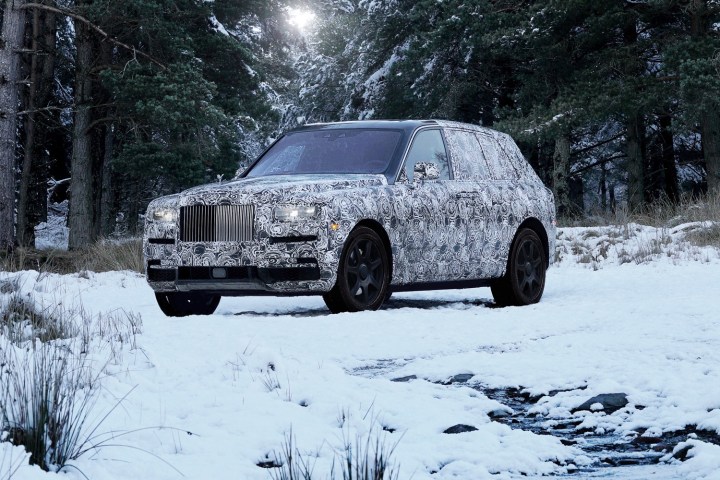 Rolls-Royce confirmed that its first SUV will be named Cullinan. Rolls has been using Cullinan as a code name to refer to the SUV since the project was first announced three years ago, but waffled over whether that name would be carried over to production. Rolls’ decision to lock in the name indicates that the Cullinan is almost ready for its unveiling, but we don’t have a firm date yet.

The name comes from the Cullinan Diamond, the largest flawless diamond ever found. The 3,106-carat gem was dug up in South Africa’s Magaliesberg Mountains in 1905, and named after Thomas Cullinan, who owned the mine where it was found. The diamond was later cut into nine pieces. The two larges of those pieces became part of the British Imperial Crown and Scepter.

Rolls likens the solidity and precious nature of the giant diamond to its new SUV, which the company prefers to call a “high-bodied vehicle” in order to curtail references to soccer moms and the like. Our spy shots also indicate that will be an apt description, as the Cullinan appears to be styled to look like a taller version of a traditional Rolls-Royce.

The Cullinan will use the aluminum-intensive platform that debuted last year on the eighth-generation Rolls-Royce Phantom. It may also borrow the Phantom’s 6.7-liter twin-turbocharged V12, which produces 563 horsepower and 664 pound-feet of torque in the sedan.

Rolls has never been known to follow trends, but the current push for SUVs was too strong for even this stalwart automaker to resist. The Cullinan will give Rolls a rival for the Bentley Bentayga, and something for customers who want all-wheel drive. Purists may scoff at the idea of a Rolls SUV, but it’s hard to deny the appeal of these vehicles to customers.

In a press release, Rolls-Royce CEO Torsten Muller-Otvos said the Cullinan name “alludes to the pioneering adventurous spirit of The Hon. Charles Rolls and the engineering innovation of Sir Henry Royce,” the company’s founders. But with the Cullinan, Rolls seems to be following a trend, not breaking new ground. That doesn’t mean the Cullinan won’t be a marvelous vehicle, but it’s following a path others have trod before.

What to buy in the 4th of July sales, and what to buy on Prime Day

Beyond rainbows: 5 tech companies that did more for Pride in 2022