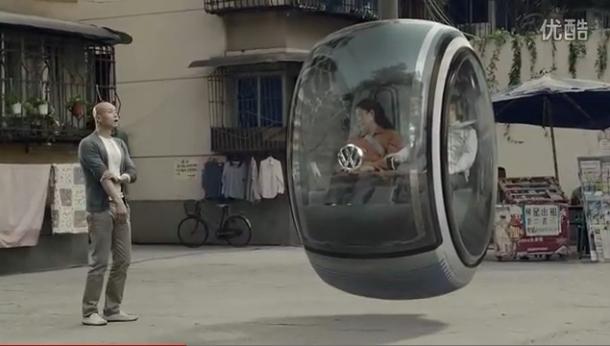 Will the car of the future look anything like the car of today? According to Volkswagen, it could look like a floating doughnut. The VW Hover Car is one of three concepts to come out of the People’s Car Project the German company company launched in China last year. It was recently presented to the public at the 2012 Beijing Motor Show.

The Hover Car floats about a foot off the ground and seats two. Right now, the hovering bubble car is powered by CGI, but, theoretically, thrusters on the back would provide forward motion. Because of the lack of friction, the Hover Car could be very energy-efficient. It could also turn on a dime, because it is dime-shaped.

In reality, the Hover Car would need electromagnetic strips embedded in the road to function. Electromagnetism would repel the vehicle from the ground, presumably the same way a mag-lev train operates. The Hover Car can also drive itself, since it will already be following a pre-determined path.

VW did not explain how the Hover Car will do anything besides hover. Forward propulsion will probably come from an electric motor, since it would be hard to find a small enough jet engine.

Volkwagen launched the People’s Car Project to develop a new way to mobilize the population. It was a way for the company (whose name means “people’s car” in German) to get back to its roots in what it describes as its most important market. Without electromagnetic roads, the Hover Car is not technically feasible, and VW doesn’t really care. The point of the People’s Car Project was to engage with Chinese customers. “We are no longer just building cars for, but also with customers and at the same time initiating a national dialog which gives us a deep insight into the design preferences, needs and requirements of Chinese customers,” said Luca de Meo, VW director of marketing.

Other People’s Car Project entires include the Music Car, which changes its color based on the driver’s music choices, and the Smart Key, a smart phone that can also start a car and monitor important functions.

Unlike most concept cars, all three People’s Car Project finalists are really just concepts. VW crowd sourced China for ideas and got the Hover Car, but would a vehicle like that actually work? How long would it take people to get used to the idea of floating? The Hover Car definitely stretches the definition of “car,” and opens up a new range of possibilities and problems to overcome. Is the world ready for the day when wheels become obsolete?