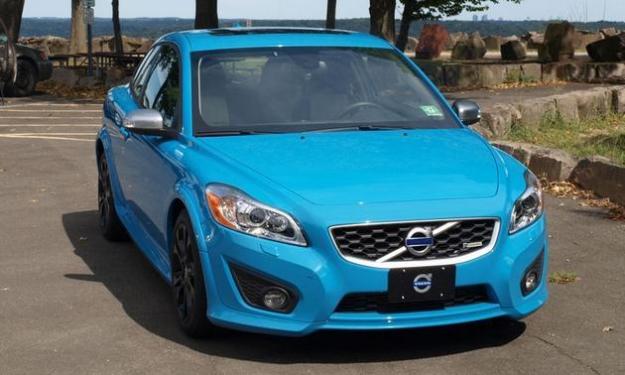 Conservative Swedish carmaker Volvo recently shocked the world with the S60 Polestar, an electric blue all-wheel drive sports sedan with 508 hp. Unfortunately, that car was just an engineering exercise for Volvo and aftermarket parts company Polestar. The S60 may have been a one-off, but Volvo is bringing a bright blue performance car to production. Meet the C30 Polestar.

As the name implies, the C30 Polestar is based on Volvo’s compact C30 hatchback. With a rear end that evokes the 1960s P1800ES, the C30 was intended to be a fashion item. That hasn’t been working out, so Volvo decided to give the C30 some amphetamines.

Volvo did not release any performance numbers, but it did say that the C30 Polestar will have the same EPA mileage ratings as the regular C30: 21 mpg city and 29 mpg highway.

For the C30 Polestar to be taken seriously, it will need to do 0 to 60 mph in the low six second range. The Volkswagen GTI, the benchmark for front-wheel drive hot hatchbacks, does it in 6.1 seconds; a stock C30 takes 7.1 seconds.

To distinguish the Polestar from lesser models, Volvo added the R Design’s body kit and some new matte black wheels. It’s topped off by that hard-to-miss exterior hue, which Volvo calls Rebel Blue.

The C30 Polestar seems like a decent bit of kit, but it could have been so much more. Like the S60 Polestar, the first super-C30 was a one-off concept. That car featured 415 hp and all-wheel drive packed into the body kit from a Swedish Touring Car.

The production C30 Polestar isn’t that extreme, but it will be almost as exclusive. Volvo will only build 250 of the cars, one for each horsepower they produce.

Normally, exclusivity is expensive, but the C30 Polestar will only cost $32,445, only $1,000 more than a loaded C30 T5 R Design with the Premium Plus package. Buyers get everything the latter has to offer, plus the extra 23 hp. That’s not a bad deal for a potential collectible.

The C30 Polestar may not be as crazy as either of the Polestar concepts, but it’s a step in the right direction. Someday, Polestar could become Volvo’s equivalent of BMW M or Mercedes-Benz AMG.

We need more 7-passenger EVs, but the 2023 Mercedes EQS SUV has room to improve
2023 Audi Q4 E-Tron first drive: the predictable and traditional EV SUV we need
Lux and refreshingly livable, Mercedes’ EQE moves EVs mainstream
2024 Chevrolet Equinox EV aims for affordability with $30,000 base price
Uber says it’s investigating ‘cybersecurity incident’
Nvidia’s Drive Concierge will fill your car with screens
The Uber hack is an outrageous tale of a teen hacking for fun
Tesla to fix window software on 1M of its U.S. cars
How to watch Tesla’s AI Day tonight and what to expect
Tesla AI Day 2022: Optimus, self driving cars, and everything else announced
Tesla hopes full self-driving beta will be out globally by the end of 2022
Elon Musk reveals first delivery date and customer for Tesla Semi truck
Nissan wants the 2023 Ariya to be its comeback EV, but the bar has been raised