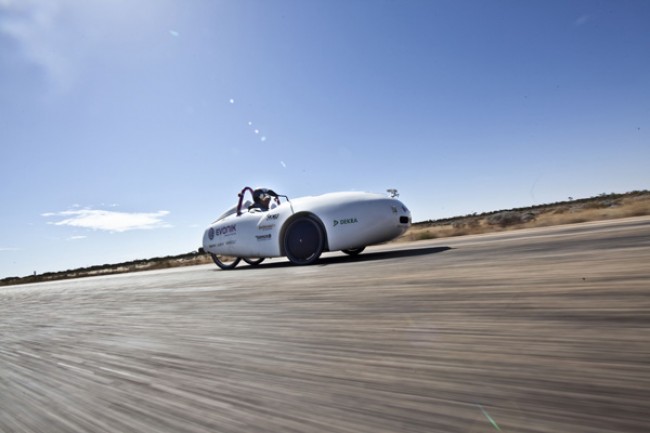 It is almost like German adventurers Dirk Gion and Stefan Simmerer saw the latest models of electric cars, and decided to see if they could go out and make the manufacturers feel bad. In a move that will have green aficionados cheering and gearheads gently weeping at the state of the world, a new electric car powered by a wind turbine has just been unleashed into the Australian wilds.

The vehicle, known as the Wind Explorer, uses an electric battery similar to those found in most of the current generation of electric cars like the Chevy Volt and Nissan Leaf, but rather than needing to plug in every night, the Wind Explorer comes standard with a 20-foot retractable bamboo mast that holds a wind turbine to charge the battery. The Wind Runner can also be powered—or perhaps more accurately “dragged”—by a kite, assuming of course that there is ample wind. The result is a lightweight electric car that weighs under 500 pounds and has a top speed of 55 miles an hour, all with close to zero emissions.

To test their new eco-mobile, the Germans travelled to Australia, where they planned to drive (and sail) the Wind Explorer from the southwestern Australian town of Albany, head east on the southern coast, and arrive in Sydney on the southeastern tip of the continent to the cheers of a handful, and the bewildered stares of most. The entire trip took 18 days, covered 3,100 miles and set a handful of world records, including being the first wind-powered vehicle to cross a continent, the longest overall distance covered for a wind-powered vehicle on land, and the longest distance covered in 36 hours by a wind-powered vehicle, as well as several others in the same vein. The trip across Australia also marks the first nearly emission-free trip across a continent in a vehicle. Even horses, which some might consider green in a sense, emit more pollution from the methane in their waste than the Wind Explorer.

The Wind Explorer uses an 8kWh lithium-ion battery, similar to what most electric cars are packing; the difference is in the means of charging the battery. Although it has a plug to charge the battery from the power grid, the real focus of the Wind Explorer is the wind turbine. When the car is in need of a charge, the drivers hoist a 20-foot collapsible mast, housed in a special compartment that runs between the driver and passenger seat, and the turbine begins to charge the battery. Once fully charged, the vehicle averaged close to 250 miles before needing to be recharged.

The exact length of time it took to recharge the battery using a wind turbine varies with conditions, but from the grid, it typically recharges at a rate of 20-percent per hour at maximum input.

Naturally, with any object that is reliant on the wind, there is the drawback that it may come to a point when there is simply no breeze. Nature can be a cruel and fickle mistress, so in order to conserve what power there was, the duo waited for the wind to return, then used a massive kite to power the vehicle. On the open plains of the Australian coast, with a wind blowing off the ocean, the Wind Explorer reached speeds close to 50 miles an hour. There is, of course, probably another reason to use the kite to power the car beyond simply saving energy. It looks like it would be kinda fun.

The vehicle itself was designed by Gion and Simmerer with the help of Evonik Industries AG, who supplied the materials, including the lithium-ion battery. The Wind Explorer is constructed of carbon fiber sandwich technology, which uses layers of foam to strengthen the material while keeping weight down. It also makes use of low-friction tires, and a specifically designed aerodynamic form. The vehicle is a two-seater with rear wheel drive.

Although the vehicle has been tested and proven to work, don’t expect to see the Wind Explorer in car lots for sale anytime soon. The model used to test the concept was an early prototype that was hand made over the course of six months, and there is also the fact that a 440-pound car would not fare all that well in accident safety tests. In fact, if a driver were rear ended by another car, they might suffer a slight case of death as the lightweight vehicle disintegrates. The test does, however, prove that the concept behind an electric car powered by a wind turbine is feasible, which should lead to more testing in the coming months and years.