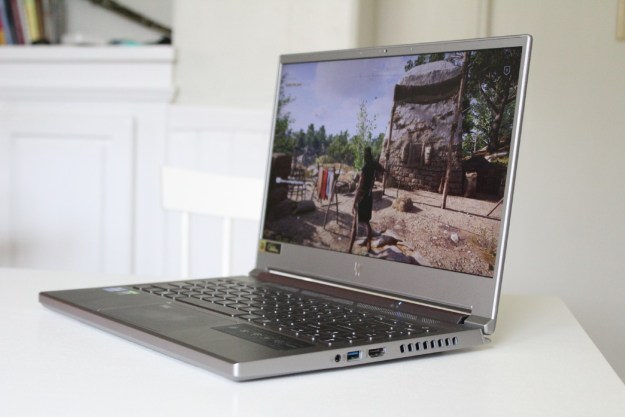 “The Acer Predator Triton 300 SE is small in stature but mighty in performance.”

The ROG Zephyrus G14 was a revolutionary gaming laptop. With just a 14-inch screen size, an RTX-level graphics card, and decent battery life, it was a breath of fresh air. and for almost an entire year, there was no challenger to what that laptop could do. The Acer Predator Triton 300 SE, finally, is a worthy rival. On the surface, that is.

Given its size and design, you might not even identify the Triton 300 SE as a gaming laptop. But can a laptop of this size really be powerful enough modern games? You might be surprised.

Being the thinnest or lightest device rarely adds up tp being the “best” device. The sacrifices made aren’t often worth the compromise. But the Predator Triton 300 SE goes for a smaller footprint rather than being ultrathin or light.

That smaller size allows the Triton 300 SE to function as more than just a gaming laptop. It’s easy to carry around, fits easily into a backpack, and doesn’t take up an inordinate amount of space on a table. The Razer Blade Stealth 13 is the only gaming laptop to top it, but Razer’s is nowhere near as powerful.

The Triton 300 SE looks the part, too. It’s not overly gaming-centric or aggressive. The only giveaways are a small Predator logo in the top-right corner of the lid and some vents along the hinge. It’s not as showy as the ROG Zephyrus G14, but there are small touches of style if you look for them. It’s a good balance, and I certainly prefer the subdued aesthetic over the larger Predator Helios 300.

That doesn’t mean the design is totally modern, though. The fake brushed metal texture on the lid feels a little outdated, as does the light silver color. Once open, there are a couple of features that feel out of step with modern trends. First off, the bottom bezel is quite large. A 16:10 screen would cut this down without having to shrink the overall chassis size. A black bezel around the sides may have helped lessen the effect as well, even if it were still plastic.

I also dislike the position of the fingerprint scanner, which is located in the top-right corner of the touchpad. Most modern laptops integrate this into the power button, though it’s still rare among gaming laptops these days.

The location of the ports is a bit awkward to make room for the side vents, but the variety will undoubtedly make you happy. On the left side, you’ll find a USB-A, a Thunderbolt 4 port, and the barrel-style power plug. The Thunderbolt port can plug into a display, be used for ultrafast data transfer, or even charge up the laptop. When gaming, you’ll want to use the proprietary charger, though.

On the right side, the Triton 300 SE throws in an additional USB-A port, HDMI 2.0, and a headphone jack. If you want to use this laptop for photo or video editing, you’ll miss an SD card slot, but its port selection is otherwise perfect.

I’ve talked about how the size of the Triton 300 SE’s screen is important, but its image quality matters, too. It uses an IPS 1,920 by 1,080 screen with a 144Hz refresh rate — ideal for smooth, responsive PC gaming. The matte layer on the screen means less reflections, but also that it’s less bright. I measured it at a max of 290 nits, which is just shy of the 300 nits I like to see as a minimum in laptops.

Fortunately, the screen makes up for that with good color saturation and contrast. Hitting 99% of sRGB and 77% of AdobeRGB color spaces is quite good for a gaming laptop, as is the 1,500:1 contrast ratio. The color accuracy isn’t as spectacular, though the Triton 300 SE isn’t exactly made with precise color grading in mind. The ROG Zephyrus is better in this regard, and maxes out at a higher 332 nits as well.

Of course, the refresh rate is the most important aspect of the display, which let’s the power under the hood of the RTX 3060 really flex.

Outside of its size, the Triton 300 SE’s performance is its most intriguing proposition. It uses a unique 35-watt processor, sitting right between a standard Ultrabook (like the Dell XPS 13) and a traditional gaming laptop (like the Predator Helios 300). The ROG Zephyrus G14 also uses a 35-watt chip, though it comes from AMD instead of Intel.

The Triton 300 SE debuts Intel’s attempt at this type of processor. Importantly, it uses the latest 10nm SuperFin architecture — which hasn’t yet come to the larger 45-watt gaming laptops. This is our first taste of what those chips will be like in some sense.

The particular chip found in my review unit is the Intel Core i7-11375H, a quad-core processor with a 3.3GHz base clock speed. As of now, the Triton 300 SE will only come in this single configuration, which also includes 16GB of DDR4 RAM and a 512GB SSD. Furthermore, it’ll be sold exclusively through Best Buy, which means availability will be tight. Thought it’s a well-balanced configuration (especially for $1,400), I do hope more options will become available at some point.

In my runs in Geekbench 5 and Cinebench R23, this 35-watt processor consistently produces stronger multi-core scores than Ultrabooks (which also have four cores) and stronger single-core scores than 10th-gen gaming laptops. Of course, 15-inch gaming laptops like the MSI GS66 Stealth or Razer Blade 15 can support six or eight-core chips, which get far better multi-core scores. It’s also far behind AMD’s eight-core Ryzen CPUs — even the 15-watt variants.

Perhaps the most interesting comparison is between the Triton 300 SE and a U-series 14-inch laptop like the HP Spectre x360 14 or Lenovo Yoga 9i 14. The Triton 300 SE’s multi-core scores are as much as 33% ahead of those. That’s what 7 to 10 extra watts of power will buy you.

This improved multi-core performance should result in better results in content-creation applications. I started with a CPU-bound Handbrake test, which encodes a 4K movie trailer to H.265. The results were good, taking just under three minutes to complete. That’s about 17% faster than the Lenovo Yoga 7i 14. The eight-core Ryzen 9 4900HS in the ROG Zephyrus G14 stomped on the Triton 300 SE, though, completing the task in just one minute and 40 seconds. I can’t say I’m overly impressed by the raw performance of Intel’s H35 chip.

Fortunately, once you factor in the Triton 300 SE’s discrete graphics card, things get much better. In the PCMark 10 Creative test, for example, the Triton 300 SE is a healthy 12% ahead of the Lenovo Yoga 9i 14. Of course, you’ll get more bang for your buck in video editing from a larger 15-inch laptop, so if that kind of performance matters to you more, the Triton 300 SE isn’t for you. The extra multi-core power in the Zephyrus G14 is a better bet.

I haven’t yet tested the updated version of the Zephyrus G14, but as you’ll see, that didn’t stop even the older model from trouncing on the Triton 300 SE in frame rates.

The Predator Triton 300 SE is close to keeping up with the Zephyrus G14 in Battlefield V, but it lags behind in other games. It trails by 14% in Fortnite in frame rate and is 8% behind in Civilization VI. That’s not what you want to see against the previous model of a direct competitor. I would assume that the recently launched RTX 3060 version of the G14 pushes that lead ahead even more.

Overall, though, the Zephyrus G14 is the faster gaming laptop in most cases. It seems that Asus has a more efficient cooling system and is able to push the graphics a harder than the Triton 300 SE. Considering the two laptops are nearly the same size, that’s notable.

But I’d be lying if I said I didn’t find myself enjoying the gaming experience on the Triton 300 SE. If you drop settings to Medium or High in most games, you’ll see frame rates jump over 100, which is the sweet spot for silky smooth animation. The difference between the G14’s 120Hz and the Triton 300 SE’s 144Hz won’t come in to play too often, but some extra headroom to play with is never bad.

I don’t normally expect great battery life out of gaming laptops, but again, the Triton 300 SE is different. It uses a lower-wattage CPU, which should improve life on a single charge. Acer claims the Triton 300 SE can even last up to 10 hours under its specific conditions.

I tested this in two ways: A local 1080p playback test and an iMacros web-browsing test. The video loop results in just under eight hours on a single charge, while the system lasted just under seven-and-a-half hours in the more real-world web-browsing test. You’ll do far better on 25-watt laptops, but I was fairly impressed by how long the Triton 300 SE could last.

The system traded blows with the Zephyrus G14 in terms of battery life. The G14 lasted two more hours in video loop and just under six hours in web browsing. Other gaming laptops that boast decent battery life include the MSI GS66 Stealth and Razer Blade 15, both of which are only 30 to 60 minutes shorter than the Triton 300 SE.

The keyboard isn’t my favorite aspect of this laptop, but it’s serviceable. Acer chose to bring the standard Predator keyboard over to the Triton 300 SE, which feels like a missed opportunity. It’s not a bad keyboard, but I’d have preferred something with less of a gaming feel, larger keycaps, and a more precise bottoming-out action. I don’t mind the multimedia keys on the right side, though I’ll admit it always throws me off when screen brightness and volume controls aren’t side by side.

The keyboard features three-zone RGB backlighting with four levels of backlighting brightness. Colors and patterns can all be adjusted in the PredatorSense application.

The touchpad fares better. It’s plenty large and tracking is smooth. It’s a high-quality touchpad, and even the click mechanism feels solid.

The Triton 300 SE features a 720p webcam above the screen. It’s lacking an IR camera though, so no hands-free Windows Hello logins.

The Predator Triton 300 SE represents a new breed of gaming laptop. Smaller, yes, but every bit as powerful. At $1,400, it’s not overly expensive for a gaming laptop, either. As far as I’m concerned, it’s the future of gaming laptops.

The only problem? The Zephyrus G14 got here first, and performs better in both games and content creation. They’re priced similarly, and land in the same category based on size. I prefer the way Acer has tuned the Triton 300 SE for cooler and quieter operation, though, which makes it a better work laptop.

The Asus ROG Zephyrus G14 is hard to beat in this category. It wins across the board in performance, making it the better option for most people. Asus also offers many more configurations, including options for cheaper graphics or higher-resolution screens.

The Razer Blade Stealth is an even smaller gaming laptop, though it’s more expensive and not as powerful.

If you’re willing to move up to a larger 15-inch laptop, you’ll find some more powerful options such as the Razer Blade 15 and MSI GS66 Stealth are good options.

The Predator Triton 300 SE should last at least four or five years, especially if you’re primarily sticking to competitive e-sports games. The laptop comes with a standard one-year warranty.

Yes. It represents a new category of gaming laptop that many PC gamers will love. The category is still in its infancy, but Triton 300 SE has confirmed to me that the highly portable, 14-inch gaming laptop will grow into an extremely attractive option for PC gamers in the future.