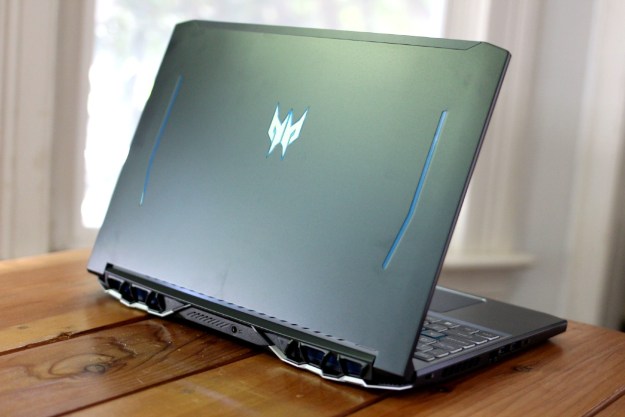 The Acer Predator Helios 300 is among the most popular gaming laptops of the past few years. It’s a consistent bestseller on Amazon, for two simple reasons. It’s affordable, and it’s reliable.

Acer recently announced an update to the Helios 300 that bumps up some of its most important specs, including the display, graphics, and the processor. The result should be better gaming performance at the same affordable price.

The Acer Predator Helios 300 hasn’t changed its design this year. It’s still a somewhat bulky 15.6-inch gaming laptop, coming in a standard black finish with blue accents. It weighs 5.3 pounds and is 0.9-inches thick, which is quite a bit larger than options like the Asus Zephyrus G or Razer Blade. A good comparison in terms of size is the Alienware m15, which weighs 5.5 pounds and is 0.8-inches thick. The Dell G5 SE Gaming Laptop is also a similar size.

While it’s a bit thick, its build quality is strong. There’s little flex in the chassis or the lid. It feels sturdy and well-built to hold or carry.

Where gaming brands like Asus and Razer have transitioned to a more minimalist aesthetic, the Helios 300 maintains Predator’s old-school gaming design. The backside sports some aggressive silver vents, and the lid has an angular design. It’s nothing obscene, but it’s clearly built to call attention to itself.

Acer has trimmed the bezels a bit in the past couple of years, however. While the top and bottom bezels are still thick, the side bezels are slim enough to provide a more modern feel.

The new Acer Predator Helios 300 upgrades from a 144Hz refresh rate to 240Hz. The faster refresh rate is useful for fast-paced online games, whether you play Counter-Strike: Global Offensive or Overwatch. While 240 frames per second might sound out of the league of laptop gaming, players who enjoy highly competitive games are often willing to lower settings for better performance. You can still opt for the 144Hz screen, however, which comes in the base $1,200 model.

The screen also has a 3ms response time, which provides fast and fluid input. The Helios 300 does not support G-Sync, however, so you might see frame-tearing, an ugly visual artifact that occurs when a game’s framerate doesn’t line up with a display’s refresh rate.

The screen has 1080p resolution and uses IPS technology. It has a blue-ish tint, though the screen handled the dark shadows of Battlefield V quite well. It’s not the brightest or most colorful screen in the world, but it doesn’t stand out as poor, either. That’s good. Budget gaming laptops with high refresh rates sometimes push visual quality aside.

The Predator Helios 300 has a solid mix of ports that will please gamers. On the left side is an Ethernet jack, two USB-A ports, and a headphone jack. The right side includes an additional USB-A port and a USB-C port.

The right side offers two options for display output: An HDMI port or mini-DisplayPort. There’s plenty of ports for your keyboard or mouse, with extra if you want to dock your laptop to an external screen. Mini-DisplayPort is an odd choice in 2020, though, and Thunderbolt 3 is not included.

The power jack is on the back. I’d prefer the display output to be located in the back for a cleaner setup, but that’s not the case here.

Unlike many affordable gaming laptops, the Predator Helios 300 has a great keyboard and touchpad. The touchpad, in particular, is surprisingly good. It has a quiet click mechanism and quick, responsive tracking. The chamfered aluminum edge surrounding the touchpad adds some panache to the look of the gaming laptop.

The keyboard keeps things simple. It offers a standard layout with only a single Turbo button at the top. There’s no macro keys to program, though Acer does include a number pad to the right of the device. Its RGB backlighting is handled by Acer’s PredatorSense software, which is offered in a four-zone setup.

Unlike Asus’ recent ROG gaming laptops, the Predator Helios 300 does include a 720p webcam above the screen. It does not support Windows Hello login, though, in the form of a fingerprint reader or an IR camera.

The Helios 300 isn’t the most powerful gaming laptop you can buy. Still, it does upgrade from Intel’s ninth-generation chips to 10th-gen chips. These are Intel’s Core i7 H-series – 45-watt CPUs with up to six cores and 16 threads.

My pre-production unit of the Helios 300 also came with an Nvidia GeForce RTX 2070 Max-Q. Note this isn’t the RTX 2070 Super graphics that recently launched, but instead the previous generation.

I wasn’t yet able to test the pre-production system in benchmarks, but I booted up a game of Battlefield V and experienced some deliciously smooth gameplay. The RTX 2070 Max-Q has proven a solid mid-range laptop graphics chip in other systems we’ve reviewed that equip it, and I doubt that’ll prove different here.

My configuration also came with 32GB of RAM and a 2TB SSD. The system includes an extra PCIe NVMe SSD slot in RAID 0 configuration for future upgrades.

The base configuration comes with an Nvidia RTX 2060, 16GB of RAM, and a 512GB SSD. The previous Helios 300 started with just a GTX 1660 Ti, so the new base model a substantial upgrade to game performance for the same price. That’s important. My decked-out review unit had all the tricks, but the base model is the one most people will buy.

The Helios 300 does have one dangerous competitor, however. The Dell G5 SE, which comes with all-AMD components inside. It starts at just $862, despite having a new Ryzen 4000 processor and Radeon 5600M graphics inside. It’s a value leader, and while it doesn’t support RTX ray tracing, its in-game performance was solid. The Helios 300 will be hard-pressed to best it.