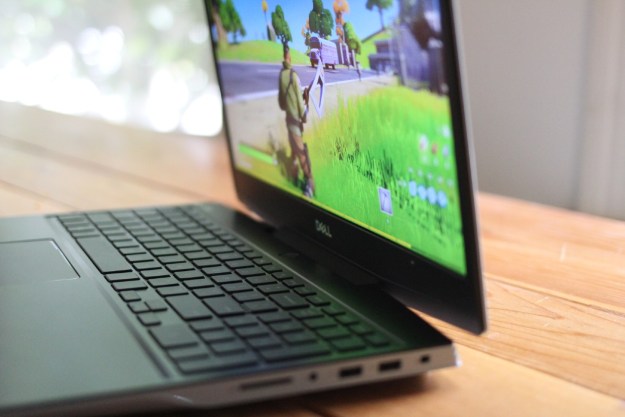 Nvidia doesn’t make PC processors. Intel doesn’t make PC graphics cards — at least, not yet. AMD is the one company that does both, and it hopes a more harmonious relationship between CPUs and GPUs could lead to extra performance.

The Dell G5 SE provides our first glimpse of that potential. It’s an affordable gaming laptop that sports both an AMD Ryzen 7 4800H and the AMD Radeon RX 5600M graphics card, the latest and greatest AMD has to offer. How does it measure up?

I won’t waste too many words on this laptop’s design. The “Special Edition” tag doesn’t refer to the look and feel. It has a plastic, chunky chassis that looks nearly a decade old and is identical to the Intel/Nvidia version. It’s a slight refinement of last year’s model that ditches the ridged edges for a simple and less unique profile. Nothing about the generic silver lid screams gaming.

It weighs 5.5 pounds and measures 0.85 inches thick. It’s no Razer Blade — but it’s not meant to be. The outdated look and size are part of the deal when you’re paying as low as $880 for a gaming laptop.

The Dell G5 SE’s lackluster screen is also part of that deal. It’s brightness is capped at just 171 nits, and the color accuracy is wildly off. Colors are highly saturated, and there’s a blue tint to the screen. That isn’t a distraction while gaming, of course. Don’t buy the G5 SE hoping to do professional color-precise photography or video work — at least not using the laptop’s built-in display.

The 144Hz refresh rate is fantastic, however. It makes for incredibly smooth actions, whether that’s the movement of the cursor or high frame rate gaming. However, the Dell G5 SE is not a FreeSync-validated platform, meaning you’ll still run into some visual artifacts and screen tears unless you cap your frame rate or turn on V-Sync.

Surrounding the screen are some hefty bezels. You’ll find thin bezels in laptops like the Razer Blade, ROG Zephyrus G14, or even the Predator Helios 300. It’s par for the course on affordable gaming laptops, though the new Asus TUF Gaming Laptop is beginning to change that.

A small change to the chassis in this year’s G5 concerns the ports. They’re no longer located on the rear, and are instead split between the left and right sides. The G5 SE offers two USB-A 2.0 ports, a headphone jack, Kensington lock, and an SD card slot one one side. On the other is a USB-A 3.2, Ethernet jack, HDMI 2.0, USB-C, and barrel plug connector. That’s a nice variety for a gamer, and the SD card slot is especially noteworthy for content creators. Thunderbolt 3 is left off, as is common on cheaper gaming laptops.

It should be noted that Dell does still offer a Dell G7. It offers a more premium chassis, which includes a better screen, aluminum surfaces, and thinner bezels.

The keyboard and touchpad on a gaming laptop are often an afterthought. That’s even truer on cheap ones. The G5 SE avoids this pitfall. The keyboard has a conventional layout, plenty of travel, and even throws in four-zone RGB backlighting for gaming goodness. You’ll have to pay an extra $30 for fancy backlighting, though.

The touchpad is large, smooth, and offers a quiet click mechanism. It’s an important feature for a laptop that can double both for work and for gaming.

The Dell G5 SE does not include a fingerprint reader or an IR camera for Windows Hello. The 720p webcam is situated in the top bezel above the screen. It’s nothing special, but it can handle the occasional Zoom call without a problem.

Next, we come to the true meaning of the “Special Edition” designation. This laptop offers eight cores and 16 threads of processing power, thanks to the Ryzen 7 4800H. It also has 36 compute units and GDDR6 memory in the RX 5600M GPU. My review unit included 16GB of RAM, a 512GB SSD, and a 1080p 144Hz screen, all for a cool $1,200. That’s a mighty attractive price. The starting $880 model features the same graphics card and a Ryzen 5 processor but dials back the storage, memory, and refresh rate.

This is a gaming laptop, so I started with 3DMark. The results in Time Spy were encouraging for AMD. It sped past a midrange version of the Dell G7 I tested in late 2019, which was powered by an Nvidia RTX 2060 and an Intel 9th-gen Core i7-9750H. A 5% win isn’t a lot in benchmarks, but a win is a win.

Processor performance is strong, but with 8 cores and 16 threads, who’s surprised?

Here’s where things get crazy. The G5 SE managed to best thin gaming laptops like the 2019 Razer Blade, which we tested with Nvidia’s RTX 2070 Max-Q. That’s impressive. The G5 SE is a chunky laptop by comparison, but it’s far less expensive.

Processor performance is strong, but with 8 cores and 16 threads, who’s surprised? AMD’s mobile Ryzen blows Intel’s six-core gaming chips out of the water in Cinebench R20 and Geekbench 5. Again, it beats the Razer Blade by 49% in Cinebench multi-core, and by the same amount in video encoding in Handbrake. I’m not surprised, especially after reviewing other Ryzen 4000 laptops like the ROG Zephyrus G14 and Acer Swift 3.

However, the real story isn’t about these components. The true magic happens when they’re working in tandem.

Games tax the GPU more heavily than the CPU, making it a combined effort that requires a balance between components.

Civilization VI is a more CPU-intensive game, and that’s where a Ryzen 4000 laptop can shine. It was only a few FPS (frames per second) behind the Razer Blade with an Nvidia RTX 2070, hitting 79 FPS at Ultra settings. Compared to the Nvidia RTX 2060 in the Dell G7 I tested, you’ll still see 19% better frame rates.

That’s a trend that continued in Fortnite. The AMD-powered G5 delivers 85 FPS at Epic settings, just a bit behind the RTX 2060 in the G7 and the Zephyrus G14. You’ll likely want to drop the settings to High to better utilize the laptop’s 144Hz refresh rate. There, the G5 SE hit an average of 105 FPS.

The graphics provide a great value compared to what you get from Nvidia for the same price.

The final challenge was Assassin’s Creed Odyssey, a game that tends to grind even the most powerful gaming laptops to a halt. Gameplay was fairly smooth at an average of 53 FPS. That’s with quality set to High — the game’s middle setting. At Ultra High, you drop to 44 FPS, which is still playable but a bit choppy.

All the games were played at 1080p, of course, as that’s the native resolution for the Dell G5 SE. As you can see, the RX 5600M isn’t the most powerful graphics card in the world, sitting comfortably between the Nvidia GTX 1660 Ti and the Nvidia RTX 2060. Fortunately, you can pick up a base configuration of the G5 SE for as low as $880, which still comes with that same GPU. That’s a great value compared to what you get from Nvidia at that price.

Along with the new GPU and CPU, the Dell G5 SE also debuts AMD technology that ties the two together. It’s called SmartShift, a way of sharing power between the two components organically. Every laptop has a cap at how much power it can play with. SmartShift uses AMD’s Infinity Fabric on both ends to push more power to either the CPU or GPU as thermal headroom allows — even past the standard wattage. AMD says SmartShift can result in up to 10% improved frame rates in games.

The trouble is SmartShift can’t be turned off, so there’s no way for me to prove it’s working. You just have to trust that AMD is handing over that extra 5% or 10% of extra performance. I was curious how SmartShift might affect a task like video rendering in Adobe Premiere Pro, which can use both the CPU and GPU. I loaded up a 2-minute 4K video clip and exported it to the ProRes 422 codec, watching the power share between CPU and GPU carefully. Video rendering in Premiere is a task best suited for a high core count processor, but it can also tap the graphics card.

The Dell G5 SE’s render time was good, finishing the export in just under 8 minutes. That’s quite fast, beating Intel-powered laptops like the Razer Blade that have fewer cores to work with. More expensive options like the Dell XPS 15 or Microsoft Surface Book 3 beat it by quite a wide margin, though.

SmartShift is supposed to work by using an automated algorithm that adjudicates the best power allocation on a moment-by-moment basis, but Dell says AMD also needs to “whitelist” applications to better optimize performance in them.

The G5 SE uses only a 51 watt-hour battery, which is smaller than the 68 watt-hour battery used in the Intel model. That was cause for concern, but the Dell G5 SE outlasted the 2019 Intel model I tested by an hour. The laptop lasted just over six hours in light usage on a single charge.

That’s not great, though it’s serviceable for a gaming laptop. The 1080p screen resolution helps, as does the lack of Nvidia’s G-Sync technology. G-Sync panels prevent laptops from switching between the discrete and integrated graphics cards, resulting in horrible battery life.

The G5 SE doesn’t have that problem. It won’t get you through a full workday by any means, but outlasting the Intel model on a smaller battery is yet another win for AMD.

It’ll only last around 2 hours while gaming, however, but that’s not unusual. You simply can’t expect to play demanding games away from a socket for long.

When talking affordable gaming laptops, it doesn’t get much better than the Dell G5 SE. It’s powerful and can play most games surprisingly well. That’s big for AMD and its Ryzen 4000 platform. How much SmartShift really makes a difference isn’t obvious, but I’m happy with the kind of performance AMD’s Radeon RX 5600M offers. Despite the outdated look and feel, Dell and AMD have a value offering here that’s hard to compete with.

There’s no strong reason to opt for the Intel version of the G5 over the AMD one, but there are some other decent gaming laptops in this price range. The Acer Predator Helio 300 is a popular option, though it’s more expensive and has weaker processor performance.

The Lenovo IdeaPad L340 is a decent option, starting at $859 for a six-core Intel processor and an Nvidia GTX 1650 for graphics. It’s a higher-end design, but the G5 SE will perform better.

The G5 SE should last you at least four or five years. It’s not the most powerful graphics card in the world, but it can handle most modern games

Yes. The Dell G5 SE provides excellent value for the gaming performance you get.

Topics
Best 2-in-1 laptop deals: Save on Dell, Lenovo, HP and more
Samsung Galaxy Book 3 Ultra vs. MacBook Pro 16-inch
The first RTX 4080 laptops are much cheaper than we expected
Best HP laptop deals: HP Envy, HP Spectre x360, and more
New AMD laptop CPU destroys its predecessor, winning by 90%
Lenovo is practically giving away this 2-in-1 Chromebook today
This micro-LED advancement is exactly what AR and VR needs
An AI-generated TV channel is mimicking ’90s sitcoms to nightmarish effect
LastPass vs. 1Password: should you switch?
How to overclock Intel’s Arc GPUs for better performance
I asked AI to recreate the best Super Bowl commercials — to hilarious and horrifying effect
Samsung’s crazy rotating 4K gaming monitor is $700 off today
Best Lenovo Laptop Deals: Save up to $2,287 today