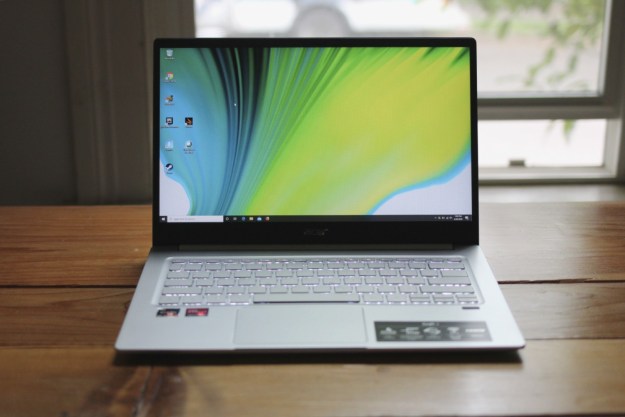 “The Acer Swift 3 with Ryzen 4000 is the most powerful budget laptop yet.”

budget laptops aren’t pretty. If they perform as well as the best laptops, though, the lack of niceties can be forgiven.

That describes the $650 Acer Swift 3. It’s one of the first to use the new Ryzen 4000 processors, which offer eight cores and eight threads. Intel laptops with eight cores usually cost over $2,000. Does the Swift 3 introduce a new era of performance for budget laptops?

Core count is the claim to fame for AMD’s 3rd-gen Ryzen 7 processors. It’s what makes them stand out so from the standard Intel fare. Eight cores across the board is no joke — that’s twice the amount you’ll find in a rival 10th-gen Intel chip. You’ll have to jump up to an Intel Core i9 laptop like the Dell XPS 15 to get eight cores, which are not used in laptops this small.

Why does core count matter so much? Four more cores should, in theory, transform this otherwise modest chunk of magnesium into something far more powerful. More cores means better performance in key tasks that most budget laptops aren’t great at. Applications in the Adobe suite are a good example. Often, they’ll use as many processing cores as they’re fed.

I tested this out with a video encoding in Handbrake. The Acer Swift 3 finished transcoding a 4K movie trailer in just 2.5 minutes. That’s 50% faster than the Intel version of this same laptop. Now that’s what four extra cores will get you. It’s even 21% faster than the XPS 13, a laptop I’ve praised for how hard it pushes its quad-core processor.

That doesn’t mean it can compete with other eight-core laptops. The Core i9 in the 16-inch MacBook Pro encoded the video 24% faster than the Swift 3. The Ryzen 7 4900H in the ROG Zephyrus G14 was 33% faster.

There are two reasons for this. The first is that the Acer Swift 3 uses the Ryzen 7 4700U, which is only a 15-watt part. A lower thermal design power means less headroom for performance. That alone explains why a slightly larger laptop with a 35-watt processor, like the Asus Zephyrus G14, performs better. The Ryzen 7 4700U also doesn’t have simultaneous multi-threading. Most 8-core competitors have this, which means their 8 processors cores act as 16 virtual cores.

The Acer’s integrated Radeon graphics are powerful compared to Intel’s Iris graphics. I played Rocket League in 1080p using Quality settings (the game’s medium settings) at close to 60 frames per second. They’re a big improvement over the integrated graphics of years past, but they don’t transform the Swift 3 into a gaming laptop.

A $650 laptop has to make compromises somewhere — there’s no way around that. And the Acer Swift 3’s biggest compromise is its display.

It’s a 14-inch 1080p screen that is disappointing in every way. The color gamut is limited at just 64% of the sRGB color scale, and the colors are inaccurate. It doesn’t completely ruin the moving-watching experience, nor does it get in the way of getting work done. It becomes a problem if you do any work that involves colors, whether that’s photography, video editing, or graphic design.

What good is speedy video editing performance if you can’t trust the colors on your screen? The Swift 3 isn’t ideal for photography or videography for this reason. It might run those apps, but if you’ll need to hook up an external monitor for accurate color.

The screen is also dim. It maxes out at just 233 nits of brightness. Even many budget laptops come with screens over 300 nits. This is a problem if you’re using the laptop in a bright environment.

The other big compromise is the look and feel. The Acer Swift 3 isn’t ugly, but it has all the obvious budget laptop issues. The bottom bezel is chunky and wraps the screen in textured black plastic. The lid and keyboard deck have that fake aluminum look, and the chassis is covered in stickers that aren’t fun to remove. Even the backlighting under the keyboard is a little off. The white light is fairly bright, but there’s no light under the space bar, which is a bit odd.

Then there’s the touchpad, which was my biggest hurdle when trying to use the Swift 3 as my daily driver. It’s plastic, doesn’t track very smoothly, and has a loud click mechanism. It’s what I’ve come to expect from a touchpad on a laptop under $800.

It is a bit larger than those on some other budget laptops though, and supports Windows Precision gestures. It’s also not centered on the laptop, which takes a bit getting used to.

Moving on to the keyboard, it’s one of the more enjoyable aspects of the Swift 3. There’s plenty of travel without the keys feeling mushy. Keys have a nice bottoming-out action and the layout feels comfortable. The fingerprint scanner is located under the arrow keys on the right, but there is no Windows Hello IR camera.

Battery life is another area where budget laptops tend to suffer. The Acer Swift 3 isn’t great in this area. It lasts just under eight hours in light usage, but in my daily routine, it came in under six hours. You’ll get more out of more expensive laptops, such as the Dell XPS 13, or even the ZenBook 13 UX333.

Still, for a laptop of this price, it performs well enough. In fact, the Ryzen 7 model actually outlasts the Intel version by 45 minutes.

Port selection is another downside of cheaper laptops. There’s plenty of variety here, but the ports aren’t the most modern. You get a single HDMI port, two USB-A ports, and a single USB-C port. Unfortunately, it’s still powered via proprietary barrel plug, as the USB-C port doesn’t support power throughput. A version of the Intel-powered Swift 3 comes with Thunderbolt 3 support, despite being only $700.

Finally, there’s bloatware. It’s there in force, as if to remind you how great a deal you got. Removing it isn’t hard, but between Norton, ExpressVPN, Farm Heroes Saga, GoTrust ID, and Acer’s own proprietary apps, it’s a bit irritating.

Eight cores in a $650 laptop seems too good to be true. It’s not. The Acer Swift 3 is easily the most powerful budget laptop ever made, beating Intel-powered laptops that are twice its price. The display quality is its primary weakness, but I was surprised by just how much value Acer managed to squeeze into this affordable 14-inch laptop.

The Acer Swift 3 is one of the first out of the gate supporting AMD’s new Ryzen 4000 processors, but it won’t be the last. Everything from ThinkPads to gaming laptops are beginning to sport these eight-core chips, though the Swift 3 remains the cheapest model announced so far.

Other laptops in this price range include the Dell Inspiron 14 5000 and the Lenovo IdeaPad 5 14-inch, but neither has the kind of power the Swift 3 Ryzen edition offers. A good alternative is the Dell G3, which offers a better graphics card for gaming and can be configured up to six cores. It’s a much chunkier laptop, though, and gets far worse battery life.

Lastly, Chromebooks offer a good value in this price range. They aren’t as powerful and can’t run the same applications, but an option like the Pixelbook Go starts at $649, has a far better screen, and gets incredible battery life.

The Acer Swift 3 is fairly sturdy laptop with up-to-date components. It should last you four to five years before it’ll start to show its age. Acer’s limited one-year warranty won’t help you much in that regard, though.

Topics
Best MacBook Deals: Save on MacBook Air & MacBook Pro
Samsung’s 43-inch mini-LED monitor looks stellar — if your desk can handle it
AMD Ryzen 7000: availability, pricing, specs, and architecture
The best game-streaming services for 2023
Turns out DirectStorage isn’t killing frame rates in Forspoken after all
Best laptop deals: Save on Apple, Dell, HP and Lenovo
Wi-Fi not working? Here’s how to fix the most common problems
The best Chromebooks for 2023
Best microSD cards in 2023: top picks for your computer, camera, or drone
Ranking all 12 versions of Windows, from worst to best
If you think PCs are dying, you haven’t been paying attention
What is ChatGPT Pro? Everything we know about its response to capacity issues
I built a couch gaming PC that puts the PS5 to shame — and you can too