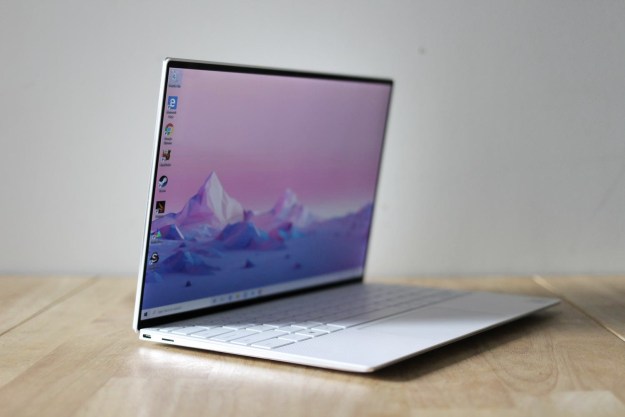 Editor’s note: The Dell XPS 13 has since been updated with Intel’s latest 11th-gen Tiger Lake processors.

Two designs defined the past decade in laptops. The early decade was all about the MacBook Air, which dominated the first half of the 2010s and inspired a sea of look-alikes. The second half, however, was all about Dell’s XPS 13. The original thin-bezel, small footprint laptop, it started a trend that is now ubiquitous.

However, after four years of iteration, Dell has cooked up something new. Something fresh. Something that takes everything I’ve long loved about the design and moves it forward into a new era.

Don’t call it a reboot. This is the laptop’s endgame.

More of what matters. That’s always been the XPS team’s motto, but here it’s more apparent than ever. It starts with the screen, which is now 13.4 inches in a 16:10 aspect ratio, which is slightly closer to square than the traditional 16:9. It’s only 0.1 inches taller than previous versions, but it feels like more. The 16:10 ratio means extra lines in my Word document, more rows in my spreadsheet, and fewer scrolls on a webpage.

This does result in black bars on most videos, which are usually formatted for 16:9. However, for the person who spends the majority of their time with a laptop in work mode, that’ll be a worthy trade-off.

The 16:10 screen is the same one used on the XPS 13 2-in-1, which was already class-leading. It offers 500 nits of brightness, among the best contrast I’ve seen, and excellent color accuracy.

It’s also sharp. The resolution is 1,920 x 1,200, which means more pixels than your typical 1080p screen. You won’t be picking out pixels on it, so unless you’re a photo editor, you shouldn’t need to opt for the higher-res panel. The benefit of the 4K+ screen is more than just pixel count — it’ll also have a wider color gamut.

It’s not just the panel itself that feels like more of what matters. It’s also the way the lack of bezels frames the screen. The top and sides are as small as ever, but now the bottom bezel gets to join in on the fun. Dell uses a unique dropped barrel hinge that sits barely below the surface of the keyboard deck. Part of that bezel, which was already small, is out of sight. It’s a small trick to make the bezel look that much thinner. On the white model that I reviewed, I like the decision to change the bezel color to black instead of white. It makes it even less pronounced.

Despite the slim bezel, Dell has squeezed its 720p camera module into the top, and Nose-cam is a thing of the past. It’s not a great webcam, but it’ll suffice in a pinch. Making even more use of the space, there’s now an IR camera for convenient Windows Hello facial-recognition login.

Moving down from the screen to the keyboard deck, the design continues to follow the “more of what matters” philosophy. Not a millimeter of space on the keyboard deck has been left without a purpose.

The keyboard takes inspiration from the XPS 13 2-in-1 in look — though not in feel. The keycaps are larger, with less space between each. They now stretch up to the sides of the keyboard deck.

The power button (and built-in fingerprint reader), which was once off to the right of the layout, is now integrated into the top right, much like it is on MacBooks. Another small change to the layout I appreciate is the full-size left and right arrow keys. Previous XPS keyboards have included half-sized keys, with Page Up and Page Down filling in the gaps. This would often result in accidental skips down the page.

It has quickly become one of my favorite laptop keyboards to type on.

One part of the keyboard I’m happy Dell didn’t redesign is the actual feel of the key presses. Rather than go the way of butterfly mechanisms (such as on the XPS 13 2-in-1), they still have 1mm of travel and a snappy mechanism. As we’ve seen even Apple move away from its own butterfly keyboards, Dell made the right choice here. It has quickly become one of my favorite laptop keyboards to type on.

The same is true of the touchpad, which has grown in overall size from last year’s model. Dell also worked on dampening the click mechanism so it’s quieter. I’d still prefer it to be even softer, but the tracking and gesture support is excellent, as always.

On the sides, you’ll find big changes if you’re familiar with the older XPS 13. Because of the nature of that edge-to-edge keyboard, there’s no longer room alongside it for ports. There are few, and they’re now pushed as close to the back as possible. On the right is a Thunderbolt 3 port and the headphone jack, and on the left is another Thunderbolt 3 port and a MicroSD card slot.

This is one less USB-C than the previous model, which sucks. Dell is now at Apple levels of port selection, matching the MacBook Air in USB ports. Unlike that device, I do prefer having a Thunderbolt 3 port on each side rather than together. It makes charging convenient, regardless of what side the power outlet is on. HP’s Spectre x360 trades out the extra Thunderbolt 3 port for USB-A to support older accessories.

Despite the stiffer overall feel of the XPS 13, it’s now easier to open.

The sides are now clad in diamond-cut aluminum, which adds a bit of glitz to the framing and a sturdier overall feel to the build quality. A thin layer of polycarbonate fiber covers the palm rests with its unique weave texture. Aside from the unibody aluminum design of the MacBook Pro, this is a well-built as laptops come.

The extra aluminum adds just the smallest amount of extra weight, which is now at 2.8 pounds. That matches the weight of both the MacBook Air and the HP Spectre x360 13. At 0.58 inches, though, it’s a bit thinner than both of those laptops.

Despite the sturdy feel of the XPS 13, it’s now smoother to open. What a relief. For years, it was one of the few premium laptops that couldn’t be opened with just one finger. A one-finger open is easy now, though I wish there was a lip to make it even more effortless.

It’s easy to just look at a laptop’s processor and call it good. However, there’s more to performance than a spec sheet. The XPS 13 makes that obvious. Despite using the same parts as other laptops, Dell has consistently innovated in pulling performance out of its components.

All the same tricks are in play here, such as strips of Gore material used to dissipate heat. And the processor is now upgraded to the most recent Intel’s 10th-gen Core ‘Ice Lake’ chips.

Dell continues to raise the bar for performance.

That’s not too exciting in 2020, but again, the XPS 13 beats its competitors in raw single-core performance in Geekbench 5 and Cinebench R20. Even the 16GB of RAM that came in my review unit was overkill for what most people will do with this laptop. (The Core i7 model I reviewed is priced at $1,250, though there will also be a Core i3 option starting at $999.)

This is among the most powerful quad-core laptops you can buy, even flexing its muscle in HandBrake video encoding. Late last year, Dell released an XPS 13 with a six-core processor, but this new model is only 7% slower in HandBrake. Impressive.

So, yes, Dell continues to raise the bar for performance. Upgrade to the 4K+ model, and you have a killer photo-editing laptop. That doesn’t mean you should buy this laptop for 3D rendering or video editing, but for most tasks, you won’t find a faster laptop at this size.

It should be noted that the $999 Core i3 with 4GB of RAM is also available (though not currently on sale). That dual-core processor won’t have near the same performance, though I haven’t tested it yet myself. However, if you just want a laptop for web browsing, Microsoft Word, and watching movies, the Core i3 will be more than adequate.

Intel’s discrete graphics have improved quite a bit with Ice Lake, which means the XPS 13 can play games. Sort of.

Dell still pulls better frame rates out of these components than its competitors, but that doesn’t mean this is a gaming laptop. Fortnite is playable in 1080p if you bring all the settings down, but you’ll need to drop it to 720p to get smoother gameplay. Casual and less demanding games play well enough, but you’ll see better performance out of the Razer Blade Stealth 13, which features an Nvidia GTX 1650.

I have high expectations for the battery life of expensive laptops. Somehow, the XPS 13 surpassed them. It lasted over 11.5 hours in our light web browsing test, crushing laptops like the MacBook Air, Dell XPS 13 2-in-1, and Surface Pro 7. It doesn’t quite beat the best of the best like the HP Spectre x360 or ZenBook 13 UX333, but it’s not far behind either.

Battery life will always depend on what you’re using it for. On one extreme end, the XPS 13 can last up to 14.5 hours in local video playback, or as few as 5 in heavier tasks. For the average person, consistent use throughout a full workday shouldn’t be a problem.

You can expect those results to be dropped by a few hours if you buy the 4K+ model. Again, that makes this 1080p+ model the ideal solution for most people.

The Dell XPS 13 is the best laptop you can buy. That has been true for several years, and it’s still true in 2020. That’s not an easy feat when making this many changes to an iconic design. The XPS 13 has slowly grown a bit more expensive over the years, but when you’re this good, the premium branding has been earned.

There are great choices if you’re looking to spend under $1,000. For everyone else, the XPS 13 should be your next PC.

There some very close competitors to the XPS 13. If you’re looking for a laptop with a 360-degree hinge, I recommend the HP Spectre x360. It’s small and refined like the XPS, and it’s a bit cheaper.

Another good option is the new MacBook Air. Now featuring quad-core processors and a better keyboard, it’s reclaimed a lot of the respect of previous generations of Macs. It likely can’t compete in battery life, however, and it still lags a bit in performance.

The Surface Laptop 3 by Microsoft is another interesting option at a close price point, thickness, and weight. It also offers a larger 3:2 screen with a higher pixel density, so long as you can bear its large bezels.

The XPS 13 is built to last, thanks to its up-to-date components and sturdy build quality. There’s nothing special about its one-year standard warranty, but this laptop should last you at least three or four years.

Yes. It’s the best laptop you can buy.

The best mouse for Mac 2022
The best cheap printers for 2022
MacBooks vs. Windows laptops: Here’s how to choose
The best 4K gaming laptops for 2022
SSDs could be as cheap as HDDs in time for Black Friday
These new Eero PoE devices are for serious Wi-Fi setups only
Google’s new privacy tool lets you know if your personal info was leaked
Nullmixer is a nasty, new Windows malware dropper
How to leave a team on Microsoft Teams
Nvidia addresses the rumors about the RTX 40 GPUs’ power consumption
Intel says Moore’s Law is alive and well. Nvidia says it’s dead. Which is right?
Best Microsoft Surface Pro deals for October 2022
Logitech’s new Mac accessories are customizable, functional, and undeniably pretty