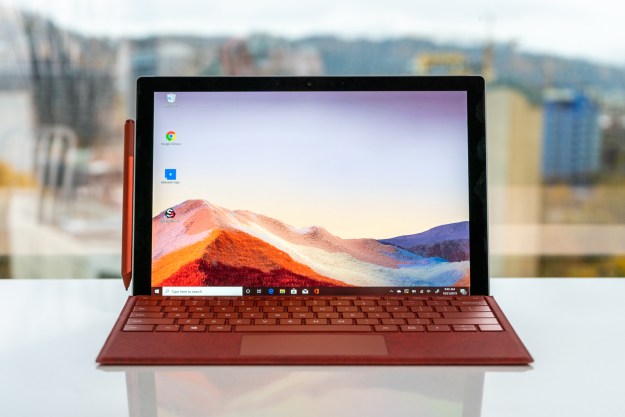 “The Surface Pro 7 makes few adjustments to the formula, but still delivers a solid 2-in-1 experience.”

The Surface Pro hasn’t evolved much over the last few years. Place a Surface Pro 3 from five years ago next to the brand new Surface Pro 7 and you’ll hardly notice the difference.

That begs a question. Why does the Surface Pro 7 exist?

Evolution slowed to a crawl

2019 was supposed to be the year the Surface Pro was reinvented. When Microsoft decided not to update the chassis of the fifth-generation Surface Pro, I gave the company a pass. And last year’s Surface Pro 6 added enough performance and battery life improvements to warrant another pass.

This time, I’m putting my foot down. The Surface Pro 7’s minor revisions are hardly worth a numeric bump from 6 to 7. Most of what I hoped Microsoft would modernize has been ignored, from the egregious bezels to the heft of the chassis, which remains a bit too much for comfortable tablet use.

1.7 pounds is a lot compared to the one-pound 2019 iPad, and the Surface Pro 7 is quite a bit thicker. This is an area Microsoft’s Surface Pro X makes huge strides, bringing the thickness below the iPad at just 0.2 inches. Though the Surface Pro 7 and Pro X weigh the same amount, its smaller size makes it easier to hold as a tablet.

When it comes to the bezels, yes — they’re far too large for a 2019 device. Inside those bezels are some great components, whether it’s the Windows Hello IR camera, the 1080p webcam, or the pair of 1.6-watt stereo speakers. Because they’re built into the tablet itself, they’re always pointed directly at you. They don’t offer as full a sound profile as the MacBook Pro, but they’re loud and crisp.

The Type Cover hasn’t been revised, either, but it holds up better. The keyboard offers a full 1.3mm of key travel, and the layout feels as comfortable as any laptop. I still wish the bottom of the Type Cover magnetized to the screen. It feels clumsy to “open” and “close” the device as a laptop. I also wish the touchpad were a bit larger. Still, these points aren’t showstoppers.

USB-C is a weird thing to cheer for in 2019, but Microsoft finally made it happen.

I wish Microsoft would bundle the Type Cover in with the purchase of the Surface Pro 7. Using Windows 10 without a keyboard is an exercise in patience, and the much-maligned tablet mode doesn’t help. The dual-screen Surface Neo has been afforded a brand new interface called Window 10X, which is designed specifically for that form factor. Despite being its flagship product, little has been done to make the tablet experience on the Surface Pro more functional.

Since Microsoft hasn’t poured money into a new chassis or new software, and the Surface Pro 7 will now be positioned as the more traditional PC-like device (relative to the Surface Pro X), making the keyboard standard seems fair.

The one meaningful change can be found in the ports. It’s a weird thing to cheer for in 2019, but Microsoft has finally swapped its mini-DisplayPort for USB-C. Few monitors include mini-DisplayPort anymore, meaning this USB-C could result in fewer dongles in your life. It also means fewer cables in general since the USB-C port can handle power delivery, video output, and data transfer at the same time.

There is a caveat, though: This USB-C port isn’t Thunderbolt 3, meaning transfer speeds aren’t as fast, and you can’t power graphics cards.

Microsoft has kept around the USB-A port for legacy accessories and magnetic Surface Connect for docking and power delivery. The headphone jack remains, though its placement is still awkward when using the Surface Pro 7 as a laptop.

Beyond the USB-C port, the other serious change is performance. The Surface Pro 7 features the new Intel 10th-gen Ice Lake processors. There are now three different options, starting with the dual-core Core i3-1005G1 at $749. This configuration comes with just 4GB of RAM and 128GB of SSD storage. Most people will be happier jumping up to the quad-core Core i5-1035G4.

For heavier loads, the Surface Pro 7 is limited by both its small size and quad-core processor.

The two extra cores ensure you’ll never be bottle-necked, even during extreme multitasking. The upgrade from last year’s 8th-gen chips to 10th-gen chips is meaningful. The Surface Pro 7 flies when loading basic web content or JavaScript apps, and multi-core performance is over 20% improved.

That’s significant, and it extends beyond just benchmark scores; this laptop completed a 4K video clip in Handbrake 24% faster than last year’s model. That doesn’t mean you should expect to edit high-resolution video without running into issues. The Surface Pro 7 is limited by both its small size and quad-core processor.

The Core i5 model of the Surface Pro 7 is not much of a gaming machine. The Core i5 model comes with G4-level Iris Plus graphics. Unfortunately, they don’t make a meaningful difference when playing games, compared to Intel UHD integrated graphics. You’ll need to jump up to the Core i7’s G7 graphics to do light gaming on the side.

It’s as pixel-dense as the iPad Pro, making for a gorgeous display to consume media on.

Microsoft has picked a slower SSD than I would have liked. The 512GB SSD that came with my review unit is nearly half the speed of what you’d find in a higher-end laptop like the Dell XPS 13 2-in-1. I didn’t notice any significant delays, but it’s worth being aware of for large file transfers.

I could, however, see this device being a realistic option for developers or photographers. The screen is every bit as crisp and color accurate as in the past. It’s a 2,736 × 1,824 resolution on a 12.3-inch screen, which is as pixel-dense as the iPad Pro, making it a gorgeous display to consume media on. Thanks to the deep black levels and high contrast, moody scenes in movies pull you in. It’s as good of a Netflix binging machine as you’ll find. It’s missing some new features like HDR or OLED, but this still looks better than a standard 1080p laptop.

It’s not, however, the kind of display professional photographers will be able to rely on because of its limited color accuracy. Hobbyists can probably get by, but serious photo editors will need to look elsewhere.

The Surface Pro never had stellar battery life, but the Surface Pro 6 represented the best of its breed. On that device, lasting through a full eight-hour workday was never an issue.

The Surface Pro 7 lacks that endurance. It died an hour and twenty minutes earlier than its predecessor in light web browsing. You can still expect eight and a half hours of battery life in light usage, however. That’s enough to make me happy, but I never like seeing a battery life reduction. That’s especially true for 2-in-1s where portability is a key selling point. Both devices have a 45 watt-hour battery, and I’m still waiting to hear back from Microsoft about why battery life may have changed.

Newer devices powered by Qualcomm processors like the Samsung Galaxy Book 2 have benefited from increased battery life, which I assume will also be true of the Surface Pro X. These devices also come with build-in LTE capabilities, which the Surface Pro 7 lacks. These are areas the Surface Pro 7 can’t compete.

The Surface Pro 7 seems to exist to solely to fill a spot in the Surface lineup.

Make no mistake. This is still a modern, powerful 2-in-1, and a good pick if you want a Windows device that can work as either laptop or tablet. Yet it no longer feels cutting edge, and trading battery life for USB-C is a disappointing compromise.

Because of its unique form factor, there have never been any serious alternatives to the Surface Pro devices. The most serious option to consider is the iPad Pro, which comes with the benefit of the huge ecosystem of iPad apps. It’s not quite the laptop replacement that the Surface Pro 7 is, though. The new Galaxy Tab S6 would also be a good option if you prefer Android.

The Surface Pro X is the device’s closest real competitor, though we don’t yet know enough about it. It has a starting price of $999, but until we know what kind of performance to expect from it, it’s a hard device to compare apples-to-apples.

Want more options? Check out our favorite 2-in-1s of the year.

The Surface Pro 7 already looks outdated, but that doesn’t mean it performs like an old PC. The device should last you at least three or four years, and as Microsoft’s flagship product, it’ll likely be supported for many years.

The one-year standard warranty isn’t anything to brag about, but if you live near a Microsoft Store, you can take advantage of the in-store customer service.