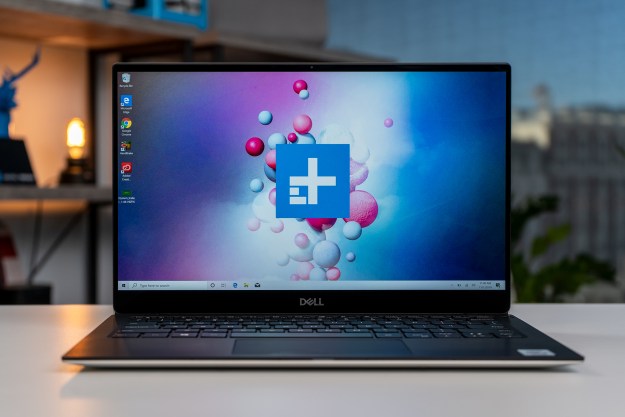 “The new XPS 13 looks familiar, but its performance is unmatched.”

It’s official. We’re living in the future. A 2.7-pound laptop with a six-core processor inside still sounds like a fantasy, but that’s exactly what the new Dell XPS 13 is.

From the specs alone, this minuscule laptop should be as powerful as some of the desktops we were reviewing a few years back. That’s right, desktops.

Still, size will always limit performance even for the best laptops. Can the XPS 13 handle this much power or is it too good to be true?

A six-pack of processing power

Dell already made significant changes to the design of the XPS 13 earlier this year. New color options like “Frost White” are beautiful, and the shrunken webcam now fits into the top bezel. They’re all the things that made the XPS 13 as close to perfect as laptops get.

This is the first chip of its kind, and the XPS 13 is among the first laptops to use it.

The only real change to the 7390 model is performance. Our review unit comes with the Core i7-10710U, a 10th-gen Comet Late processor from Intel, paired with 16GB of RAM. This CPU is no ordinary U-series processor. It’s a special variant of the 10th-gen Core i7 that packs two extra cores inside the a 25-watt power envelope.

It’s the first chip of its kind, and the XPS 13 is among the first laptops to use it. That gives this six-core XPS 13 more muscle to flex.

In benchmarks, the XPS 13 is even faster than powerful laptops like the Razer Blade 15, which has the si-core Intel Core i7-9750H processor. Despite being a more power-efficient processor with a lower base frequency, the Dell XPS 13 consistently beats the Razer Blade by around 5%.

What six cores gets you

Real-world tests weren’t quite as impressive. The XPS 13 was a solid 20% behind the Razer Blade 15 in Handbrake video encoding. The same goes for devices like the MacBook Pro 15 and Dell XPS 15 when equipped with that same 9th-gen processor at the Razer Blade. It’s clear the Dell XPS 13’s implementation of the six-core chip runs into some thermal limitations.

Still, the two extra cores change what’s possible on a 13-inch laptop. A 4K video export that took 20 minutes on last year’s high-end XPS 13 now takes around 13 and a half minutes. That difference is meaningful. You’ll save a lot of time if you crunch processor intensive tasks with your laptop.

This high-end, six-core model is only available with the 4K display. Fortunately, the 4K Dell is more than just sharp. It’s bright, maxing out at 472 nits, which is brighter even than the industry-leading, MacBook Pro.

It’s properly calibrated for accurate colors, too. Precise colors are important for content creators. The last thing you want is to make an editing decision based on screen you can’t trust.

The color gamut isn’t as wide as what you’d find on an OLED panel, nor is the contrast as high. However, it’s still one of the better 4K screens you can find on a 13-inch laptop to date. Video content looks beautiful, making Netflix binges fully enjoyable.

That high resolution screen does have an effect on battery life, though. Seven and a half hours in light usage is what you can expect on average. That will dip lower if you need to have the screen brightness maxed all day or are running some heavy applications.

The 1080p model will net you well over eleven hours by comparison. That’s the better option if battery life is a major concern though, as said, it isn’t available with the Intel 10th-gen six-core processor.

A new challenger in the ring

Though the XPS 13 hasn’t changed this time around, Dell has a secondary flagship laptop that made some striking tweaks to the formula. Some of those changes I would have liked to see come to the XPS 13 — others not so much.

The XPS 13 2-in-1 has a taller, 16:10 screen that I’ve grown fond of. The boxier shape means more screen real estate and a better view of your content. The squat look of a borderless 16:9 laptop like the XPS 13 is starting to look a tad short next to laptops like the Surface Laptop 3.

At its thickest, it’s a hair thinner than the MacBook Pro.

However, the XPS 13 is still among the best laptops to travel. At 2.7 pounds it’s a supremely light laptop. At its thickest, it’s a hair thinner than the MacBook Pro. The 16:9 screen does contribute to the XPS 13’s light weight and small dimensions.

The XPS 13 2-in-1 also uses more aluminum than the XPS 13 clamshell, bringing the gem-cut finish up the edges of the device. That gives it a more premium look. The XPS 13 isn’t shoddy by any means, but it doesn’t live up to its 2-in-1 cousin.

On the other hand, the XPS 13 has a superior keyboard. The XPS 13 2-in-1 includes the short-travel “maglev” keyboard also found in the Dell XPS 15 2-in-1. I find the longer key travel of the XPS 13 a bit more comfortable. The touchpads are similar, though the XPS 13 2-in-1’s is slightly wider. That’s a nice touch.

Lastly, there’s the choice between the XPS 13’s Intel Comet Lake processor, and the XPS 13 2-in-1’s Intel Ice Lake chip. Comet Lake is what gives the XPS 13 access to the two extra. However, the newer Ice Lake architecture in the XPS 13 2-in-1 features improved Iris Plus integrated graphics. I wish I could do some light gaming on the XPS 13, but for now, that’s a struggle.

The new XPS 13 is bit more expensive than it used to be. You’ll want to be careful when picking out the right model for you. The two-core Core i3 model, which comes with just 4GB of RAM, starts at $950. At only $50 cheaper than the MacBook Air, it’s a tough sell. The six-core model starts $1,350, though you’ll need to spend more for the extra RAM and the 4K display. You can get a 4K XPS 13 cheaper if you opt for the older XPS 13 9380, though you’ll miss out on the extra power.

All configurations come with the same port selection, which includes two USB-C Thunderbolt 3 ports for power and video output, one on each side of the laptop. A USB-C 3.1 port, microSD card slot, and headphone jack are also included.

The XPS 13 was already the laptop I recommended to most people. Now, there’s an option for the six-core Core i7, which makes it most powerful 13-inch laptop you can buy. Not everyone needs this much power, but for those that do, the XPS 13 offers the most performance I’ve seen in a laptop this small.

At over $1,700, you have a wide world of options. One of the other few other laptops to use the six-core Core i7 is the ThinkPad X1 Carbon. Unfortunately, a comparable configuration with a 4K screen and 16GB of RAM will cost you over $3,000.

You could opt for the Razer Blade Stealth. It has just a four-core processor, but includes options for a discrete GTX 1650 graphics card and a 4K screen. That’ll cost you $2,000.

If you don’t need the power or the 4K screen, of course, there are plenty of cheaper 13-inch laptops out there, such as the Surface Laptop 3 or the Asus ZenBook 13. None offer as good a balance between price, features, and performance as the XPS 13 though. You can read more about how the Surface Laptop 3 and Dell XPS 13 match up through our in-depth comparison of these devices.

The XPS 13 should last year at least three or fours. Dell’s standard one-year warranty is nothing special, though the hardware is durable and futureproof-enough to make up for it. You can’t, however, upgrade the storage or memory once you but it. Make sure to give it the amount of power you really need when finalizing your purchase.

Yes. I’ll leave which configuration you spring for to you, but you can’t go wrong with the Dell XPS 13.

If you want discounted options, you can also take a look at laptop deals and Dell XPS deals.