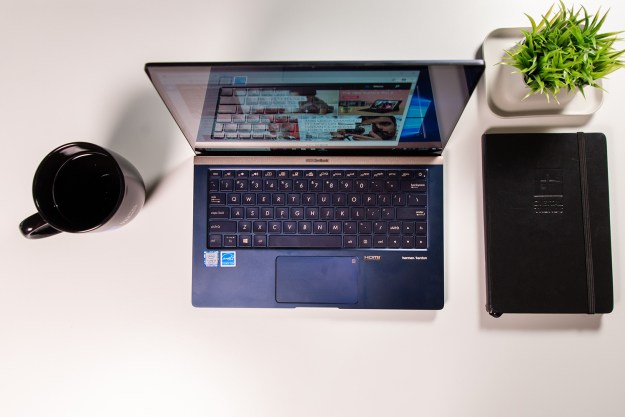 “You could spend more on another laptop, but Asus ZenBook 13 UX333FA is all you need.”

Dell’s XPS 13 has hogged our top spot among laptops for the past few years, but a strong contender has always lingered in its shadow. The Asus ZenBook 13 300-series. Though not quite as nice as the XPS 13, the ZenBook 13 consistently delivers great performance and practical portability. Its workmanlike look was its only weakness.

Even the new machine’s internals are impressive. You’ll find a Core i5-8265U processor, 8GB of RAM, and a 256GB solid state drive, all for just $850. Is this the laptop that can finally dethrone Dell’s XPS 13?

As mentioned, the ZenBook 13 UX333 has a unique blue-and-gold colorway that first arrived on the Asus ZenBook 3, a top-tier laptop line Asus debuted in 2017. It absolutely stands out from the crowd, but it’s not so garish that you’ll be shy about whipping it out at a meeting. A darker, Slate Gray model is available, but the more common “Royal Blue” model is our favorite.

Otherwise, this ZenBook 13 is the very picture of a modern laptop. It’s slim at 0.55 inches thick, and light at about 2.7 pounds. The display has thin bezels, something earlier models notably lacked, and the chassis is constructed from durable metal that feels luxurious in-hand. We also like the “concentric circle” etching across the lid. It’s subtle, but it adds texture to what would otherwise be a slab of flat, matte metal.

The Asus ZenBook 13 absolutely stands out from the crowd, but it’s not garish.

Does it beat the XPS 13? Not quite. Dell’s laptop looks and feels nicer, mostly thanks to the soft-touch, carbon-fiber weave looks of the interior. Still, the new ZenBook 13 comes much closer than previous models, and even defeats affordable favorites like the Huawei MateBook X.

Connectivity’s not bad, either. You’ll receive two USB-A ports, one 2.0 and one 3.1, along with one USB-C 3.1. Video is provided by HDMI and audio support is offered by a combo headphone/microphone jack. It’s not a lot of options, but it’s perfectly adequate for a 13-inch laptop. Wireless support includes 802.11ac and Bluetooth 5.0.

Thunderbolt 3 is the only connectivity option that’s notably absent. That’s excusable given the Zenbook 13’s modest price. Even expensive laptops occasionally neglect it, and budget models rarely include it.

Let’s start with the good news. Asus’ ZenBook 13 UX333FA doesn’t sacrifice keyboard travel to achieve its thin profile. The keyboard feels great, easily on par with the Dell XPS 13. Apple’s MacBook Air feels like a block of wood by comparison.

That’s a good first impression, but there’s a problem. Asus made the strange decision to cram (almost) full-sized arrow keys into the lower right corner. That means the right-side Shift and Control keys must be smaller. That’s annoying.

It gets weirder. The power button is on the keyboard, located right beside the Delete key and above Backspace. We spent our first three hours putting the ZenBook 13 UX333FA to sleep, cursing, and turning it back on. Eventually we learned the layout and stopped making that error, but it remains a strange decision that could cause trouble if you often use other computers with a more, uh, conventional layout.

The touchpad works well enough, but it’s cramped. Dell’s XPS 13, Apple’s MacBook Air, Huawei’s MateBook X, Razer Blade Stealth, and many other competitors provide room. The ZenBook, though, has a party trick. Touching the upper right corner lights up the virtual numpad, giving you a chance to catch up on your accounting. It works for breezing through numbers, but we activated it by accident several times, so we’re not sure it’s worth the trouble.

This screen is amazing

Laptop displays have come a long way over the past few years, but we weren’t expecting the Asus ZenBook 13’s screen. Just, uh. Wow.

Contrast ratio is a key number. It came in at 1350:1, which is excellent for a laptop and beats everything we’ve seen since the Asus ZenBook 13 UX331UA. That includes the new Apple MacBook Air, the Lenovo Yoga C930, the Surface Pro 6, and even the ThinkPad X1 Extreme with 4K display. Name whatever you’d like. Asus’ ZenBook 13 UX333FA, sold at $850, beats it.

That’s not all. The laptop also delivers an average color error of just 1.68. A lower number is better here. The ZenBook 13 UX333FA isn’t best-in-class– the MacBook Air hits an average error of 0.98, for example – but it’s certainly quite good. You also get 77 percent of the Adobe RGB color gamut which, once again, is shoulder-to-shoulder with top performers like the MacBook Air and Dell XPS 13.

All this means one thing; the screen looks great. It offers deep, inky shadows with vibrant colors. And while 1080p resolution doesn’t sound like much in 2018, it remains the best choice for a 13-inch laptop. It’s sharp enough to look good and doesn’t have the battery life penalty associated with 4K.

There’s one weak spot. Brightness. The maximum luminance of 265 nits is lower than all its competitors, yet the screen is glossy. Glare can be an issue, and you’ll have to shift the screen to combat it. We saw the same flaw in earlier budget Zenbook models, but most had anti-glare coatings that made their meager brightness less noticeable.

Asus’ has packed the latest Intel hardware in the ZenBook 13 UX333FA. Intel’s Core i5-8265U is the star of the show. A quad-core chip with a maximum clock speed of 3.9GHz, it’s impressive on paper and delivers predictably strong results in tests.

Let’s see. Geekbench 4’s single-core score comes in at 4,129, while the multi-core score is 13,903. Those numbers aren’t much different from the earlier Core i5-8250U, but they’re about as strong as you’ll find in a 13-inch laptop. We’re not going to complain.

There’s more good news from the hard drive. It’s a solid state NVMe-based drive that offered read speeds of 1,094 megabytes per second and write speeds of 963 MB/s in a sequential test. It sets no records, but it’s good overall, and near the top of what we’d expect in an affordable price range. Most laptops in the $800 price range, including the previous Zenbook 13 UX331, have a SATA-based drive. Machines so equipped struggle to exceed read or write speeds above 500 MB/s.

But no, it can’t game

The new Intel processor doesn’t do anything to change graphics performance, however. It’s still Intel HUD 620 graphics, and that means performance that’s only adequate for older 3D titles and, even then, at lower settings.

If anything, the Asus ZenBook 13 is a bit slower than a usual system with UHD 620 graphics. Not that it matters. Even the Razer Blade Stealth hasn’t yet managed to fit real gaming power into a portable 13-inch laptop.

But yes, it’ll last all day

A 50 watt-hour battery ships in the Asus ZenBook 13 UX333FA. That’s not a massive battery, yet not small, and this laptop is well configured to take advantage of it. You might be surprised by how long you can spend away from a charger.

Even the Basemark benchmark, the most demanding battery life loop we run, lasted nearly five hours on the Asus ZenBook 13 UX333FA. A lighter load, such as watching a 1080p video, will extend life just beyond 13 hours. That’s a strong result, beating the Apple MacBook Air and even the Dell XPS 13, though the latter comes close.

Our time with the laptop left us as impressed as the numbers suggest. We sent the ZenBook 13 off on several day-long trips, and it lasted through each without running out of battery by the end of the day. Even frequent fliers should find this laptop a wonderful travel companion.

The Asus ZenBook 13 UX333FA is an excellent laptop. Its $850 price tag is slightly higher than earlier models, and that’s a shame, but it buys you a system with many strengths and few weaknesses. This is all the laptop most people need.

Dell’s XPS 13 is a better laptop, but it’s also considerably more expensive for similar hardware. Not everyone will think its improvements, like a better keyboard layout and superior design, are worth the price.

This laptop should easily last five years. It has the latest Intel mobile hardware, a solid chassis, a fast hard drive, and a great display. There’s even a wide range of connectivity. Asus only warranties the laptop for one year, but that’s par for the course among laptops. You’ll receive the same warranty even if you spend thousands more.

Topics
Best HP laptop deals: HP Envy, HP Spectre x360, and more
Best Apple Deals: Save on AirPods, iPads, MacBooks and more
Best Chromebook deals: Get a new laptop from $114
Best 17-inch Laptop Deals: Get a large laptop for $330
The best PC power supply for 2023
ChatGPT has a new way to detect its own plagiarism
Samsung Galaxy Book 3 Ultra vs. MacBook Pro 16-inch
The Galaxy Book 3 Ultra is Samsung’s most powerful laptop ever
Nvidia may have another monster GPU in the works, and the price could be outrageous
AMD’s Ryzen 9 7950X3D pricing keeps the pressure on Intel
What is ChatGPT Plus? Everything we know about the premium tier
ChatGPT Plus to bring priority access during peak times — at a hefty price
Usually $3,879, this Lenovo laptop is down to $1,479 today