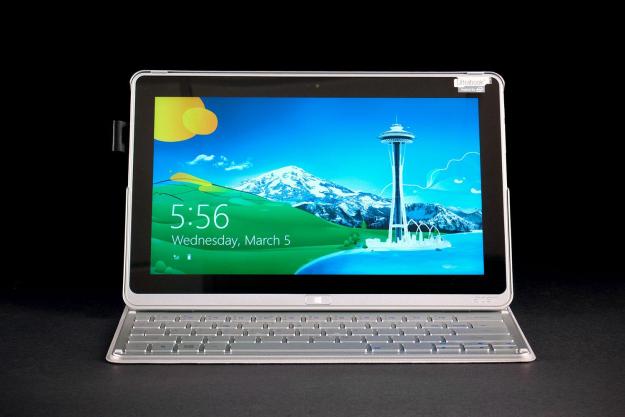 “Though remarkably thin and light for a convertible, Acer’s Travelmate falls victim to the same flaws that sink the competition; poor battery life, so-so performance and a bad keyboard.”

Windows convertibles have improved dramatically since the first models were introduced in 2012. Battery life has gone up, weight has gone down, performance has improved, and Windows itself has been (modestly) updated with 8.1.

Yet convertibles still suffer from one serious flaw; they’re not very good as tablets. The answer to this problem, in theory, is the PC tablet, but attempts to build such a device have not gone well. Acer, Microsoft, Dell, HP and others have tried, but no company has managed to convince consumers that a tablet with Windows and a powerful Intel processor is what they need.

Acer doesn’t give up easily, however, so the company is giving the idea another go with the new Travelmate X313. Packing an Intel Core i3-3229Y processor, 4GB of RAM and a 128GB SSD, this tablet looks impressive on paper. However, unlike Acer’s affordable Iconia Tab W700, this new model is priced at $949, which puts it in the same league with the Microsoft Surface Pro 2 and Samsung Smart PC Pro 700T. Is there really room for another expensive Windows tablet, or does the X313 share the failings of its competitors?

The Travelmate X313 convertible includes a bundled wireless keyboard case designed to look like a leather journal. Snapping the X313 into the case is a cinch, but removing it can be a pain, as there’s no easy way to pry the device away from the plastic tabs holding it in place. The case also acts as a stand, propping the tablet up to create a pseudo-laptop mode.

The tablet can be used outside the case, of course, but once free, the X313 offers little to distinguish itself. In fact, its unibody chassis looks almost identical to the Iconia W700 that we reviewed over a year ago, though Acer’s official specs state the X313 is only four-tenths of an inch thick and weighs only 1.74 pounds, making it slightly lighter and thinner than the W700.

The X313 features three buttons on its chassis. One is the Windows button, located front and center below the display. The other two are power and volume, which are located on the right flank when the tablet is held in landscape mode. We found that users with large hands sometimes can accidentally activate the extremely large volume control when holding the tablet in a comfortable position, but discovered no other ergonomic issues.

As for ports, USB 3.0, mini-HDMI and a headphone jack can be found on the Travelmate’s left side. These are nice to have, but they also reinforce the system’s focus on tablet use, as a single USB port simply isn’t enough for serious laptop use. Want to read a flash drive while using an external mouse? You can’t – unless you buy a USB splitter.

While the X313’s case includes a keyboard, Acer has opted for an extremely thin design to minimize bulk and weight. This decision is understandable but, as with other do-it-all tablets like the Microsoft Surface Pro, it results in a poor typing experience.

A good keyboard provides keys that offers tactile feedback when a key is pressed, a layout that makes keys easy to use without looking at them, and a back-light with several brightness settings. The Travelmate’s case offers none of these qualities. While certainly usable in a pinch, the keyboard case is inferior to virtually every laptop ever made. It doesn’t even include a row of function keys.

There’s no touchpad, either, so Windows must be navigated via the touchscreen, you plug in a mouse. You can get by with the touchscreen as long as you stay in the Metro environment, but the desktop experience continues to suffer from the problems it has endured since the launch of Windows 8. An external mouse is highly recommended when using the X313 as a laptop.

Look on the bright side

The first thing we noticed about the X313’s 1366×768 display is that it’s bright. In fact, it’s really bright. The backlight outputs up to 433 lux, the third-highest result we’ve ever recorded. Only the Lenovo Helix and Sony Duo 11 are brighter, though the original Microsoft Surface Pro is close at 426 lux.

This means the display can be used in a wide range of conditions, as any reflections visible on the glossy panel are simply overpowered. The bright backlight also contributed to an excellent contrast ratio of 710:1. Black levels are just average, though, so dark scenes suffer from a grayish hue.

Our tests indicated that the X313’s panel can render just 69 percent of the sRGB gamut. That’s substantially less than the Dell Venue 11 Pro and the HP Spectre 13t x2, both of which can handle 99 percent of the gamut. Subjectively, this problem results in a less vibrant image than the contrast ratio suggests.

Sharpness is also an issue. The X313’s display measures 11.6 inches diagonally, and a 1366×768 panel is usually adequate for a laptop of this size. This device has a tablet mode, however, and by nature, it will be physically close to the user when used this way. This is an issue with the X313 because individual pixels are easy to discern when the tablet is held just a couple of feet away, a problem that’s hard to overlook when significantly less expensive tablets like the iPad, Galaxy Note 10.1 and Dell Venue Pro 11 offer resolutions of 1080p or better.

The built-in speakers generate a surprisingly high level of volume and reasonable sound quality as well, though the mid-range is distorted at higher volumes. This can make dialogue or lyrics hard to distinguish when they’re accompanied by bass. We recommend a pair of headphones or external speakers for maximum enjoyment.

The Core i3-3229Y found in the Travelmate X313 is clocked at 1.4 GHz and, like other Core i3 processors, but doesn’t feature Turboboost, the tech that allows the CPU to achieve higher clock speeds in certain tasks. Because of this, the X313’s benchmark scores suffered notably. In SiSoft Sandra’s Processor Arithmetic test, the X313 managed a score of only 21.46 GOPS, while 7-Zip’s compression benchmark spat out a score of just 4,167 MIPS.

Surprisingly, this is worse than what the Dell Venue 11 Pro managed, which squeezed out a score of 5,749 MIPS from an Intel Atom Z3770 quad-core. The X313 also trails the Panasonic ToughPad, the HP Spectre 13 x2, the Samsung ATIV Smart PC 700T, and the ASUS Zenbook Trio.

The X313 is another mundane convertible PC with all the problems we’ve come to expect from the genre.

PCMark 8’s storage benchmark gave us a mark of 4,837 from the Travelmate’s 128GB SSD. This is a typical result, and most competitors score within 100 in either direction. The Dell Venue 11 Pro and ASUS Trio are exceptions to this general rule though, getting inferior grades of 4,277 and 2,672 respectively.

Our synthetic gaming benchmark, 3DMark, turned in a score of 2,286 in the Cloud Gate test and 287 in the demanding Fire Strike test. These scores are among the worst results we’ve seen recently; only the HP Spectre 13t x2 and Toshiba Click performed worse.

To see how these numbers translated to real-world gaming, we loaded up League of Legends and played a full match. The game was more or less playable at medium resolution due to an average framerate of 33 FPS that we got, with a maximum of 41 and minimum of 22. With the graphics set to Very high, the game was not very enjoyable, as the average fell to 25 FPS with a maximum of 33 and a minimum of 14.

Packing the Travelmate is a cinch thanks to the case, which bundles the X313 and its keyboard into one small package that weighs a tad more than two pounds combined. A backpack can easily swallow this system, power adapter included. Even a large purse would be more than up for the task.

That’s where the good news ends, unfortunately, as the Peacekeeper benchmark ate through a full charge in just four hours and forty-two minutes. That’s actually not a bad showing, as the HP Spectre 13t x2, Acer Trio, Lenovo Yoga 2 Pro and Panasonic ToughPad all have less endurance. The Dell Venue 11 Pro lasts two hours longer, however, and the Samsung Smart PC Pro 700T offers just over five hours of web browsing on a full charge.

All of these Windows tablets are lacking when compared to the iPad, the Galaxy Note or the latest Kindle Fire. Tablets running a traditional PC operating system still can’t offer the battery life consumers have come to expect from other devices.

Our wattmeter indicated that the X313 uses more power than we expected it. We measured power consumption at 9 watts at idle with the display set at its dimmest, and 11 watts with brightness set to the max. Load testing indicated a maximum consumption of 27 watts, which is about average for an Ultrabook, but high for a PC tablet. Even the HP Spectre 13t x2, a 13-inch dockable, consumes no more than 22 watts.

At idle, the Travelmate X313 behaves like most convertibles and Ultrabooks. The fan is barely audible, and external temperatures hover around 85 degrees Fahrenheit. External temperatures drop by a few degrees when the tablet is taken out of its case.

Putting the system under heavy load with the tablet inside its case increased fan noise to a moderate 44.2 decibels. Heat increased to 95.3 degrees, which is warm enough to notice but not hot enough to make the X313 uncomfortable to use.

The Acer Travelmate X313 is yet another entry in a long line of so-so Windows convertible Ultrabooks, and its flaws are entirely familiar. Lackluster battery life? Check. So-so performance? Yep. Poor bundled keyboard? Double-check. We’ve been down this road before, and while the hardware in this system is newer, it falls short for the same reasons as previous models have.

Pricing the Travelmate at $949 doesn’t do it any favors either. The Iconia W700, released a year ago, received a passable review score because it sold for $750 while most competitors asked for more than $1,000. The X313 flips the script to Acer’s detriment; it’s now the Travelmate which is over-priced. The list of less expensive competitors includes the Microsoft Surface 2 Pro, the Dell Venue 11 Pro, and the Samsung Smart PC 700T Pro. The only advantage the X313 offers over the competition is its 128GB SSD, which is double the 64GB drive found in most devices of this class.

That’s a nice extra, but it’s hardly enough to distinguish the X313 from the competition. The Travelmate X313 is another mundane tablet PC/convertible saddled by all the problems we’ve come to expect from similar devices.

The best cheap printers for 2022
MacBooks vs. Windows laptops: Here’s how to choose
Best gaming laptop deals for October 2022
Best laptop deals: Get a portable workhorse from $119 today
Google’s new privacy tool lets you know if your personal info was leaked
Nullmixer is a nasty, new Windows malware dropper
How to leave a team on Microsoft Teams
Nvidia addresses the rumors about the RTX 40 GPUs’ power consumption
Intel says Moore’s Law is alive and well. Nvidia says it’s dead. Which is right?
Best Microsoft Surface Pro deals for October 2022
Logitech’s new Mac accessories are customizable, functional, and undeniably pretty
Adobe adds AI magic to Photoshop and Premiere Elements
DLSS 3 could boost your gaming performance by up to 5x