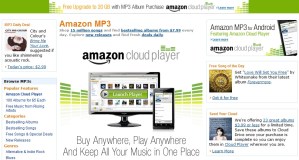 You may have read yesterday that Sony Music isn’t a big fan of Amazon’s newly launched Cloud Player. The beef is that the online retailer’s new cloud service offers music streaming to users even though it never actually went about the process of negotiating for licenses to do so. Amazon contended that streaming licenses are not necessary, since the content is coming from each user’s personal storage space in the cloud-based network, making it analogous to a remote external hard drive.

Now there’s word that Amazon is “aggressively” pursuing music licenses in the hopes of improving its new service, which many believe was launched in a surprise move as part of an attempt to beat competitors Apple and Google — both believed to be working on cloud services of their own — to market. To be fair, the news comes from unnamed “people familiar with the matter,” according to a report in The Wall Street Journal. That said, there are reasons why obtaining streaming licenses might be attractive to Amazon even though the law seems to be on its side with regards to the Cloud Player launch.

One potential problem is the Cloud Player feature that allows up to five people to listen to the same song simultaneously. There is actually legal precedent to back up Amazon’s “no license is necessary” claims, the WSJ notes. A 2007 lawsuit involving Cablevision and its “remote DVR” plan eventually made its way to the U.S. Supreme Court, which ruled that the company could keep recorded TV and film content on a central server as long as there were separate copies for each user. While Amazon’s Cloud Drive and Player are fundamentally the same — streaming content comes from each user’s Cloud Drive locker — the streaming-for-five capability is more questionable.

Even if Amazon were to knock that feature out, there are still reasons for the company to seek out streaming licenses for its music. The big one is storage space. Say Kanye West releases a new album, and three million people buy it as an MP3 download through Amazon. That’s three million different copies of a single album in three million separate Cloud Drives. With a license from the record label to stream that content, all of the music available for purchase could be stored in a central server and accessed by anyone who owns it.

Suddenly, those three million copies shrink down to just one. Anyone who owns the digital album would still have access to streaming through Cloud Player and downloading through Cloud Drive, but the actual, physical data would be streamed from elsewhere. Of course, this would also raise a whole new set of concerns.

If Amazon secures the necessary rights to stream music and suddenly all MP3s are accessed by the cloud from a central database, will that purchased content still consume each user’s allotment of Cloud Drive storage space? Common sense says no since the data is technically stored elsewhere, but securing those licenses costs money. Instead of going the subscription route, as Sony‘s Music Unlimited does, Amazon could simply point to the drain on each user’s storage space as “payment” for the right to stream.

If the online retailer really is going after music streaming licenses, it appears that a rough road may lie ahead. Sony responded quickly yesterday with a vague threat of legal action, and now there’s another one from Sony/ATV Music Publishing chairman Martin Brandier. “This is just another land grab,” he said, in a nod to Amazon’s perceived attempt to beat Apple and Google to market. “I can’t make it any plainer than that. It’s really disrespectful, and of course we are considering all of our options.”

Topics
How to delete a BeReal post
iCloud might be sending your photos to strangers’ computers
How to insert a signature in Apple Pages
Half of Google Chrome extensions may be collecting your personal data
HP 72 Hour Flash Sale: The 6 best laptop deals, from $250
Samsung’s first QD-OLED gaming monitor might be dead on arrival
Latest Dell sale sees must-have laptops starting from $380
Chrome’s take on Nvidia DLSS is set to launch, but you can’t use it yet
Lenovo Yoga 7i 2-in-1 laptop just got a $700 price cut
Google’s new Bard AI may be powerful enough to make ChatGPT worry — and it’s already here
Why you probably shouldn’t buy the $599 M2 Mac mini
Samsung’s 34-inch Ultra-WQHD monitor is $200 off right now
This HP gaming PC with an RTX 3080 is $700 off