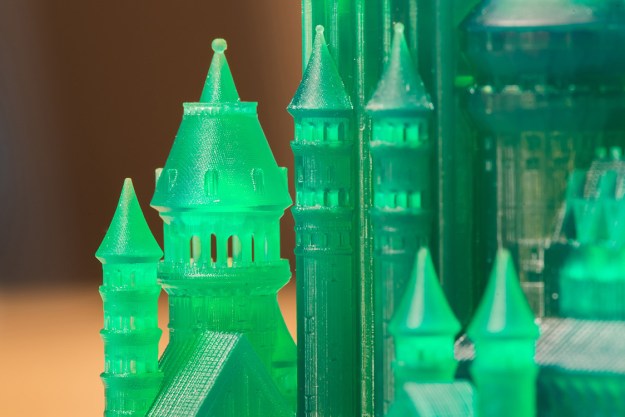 “The Photon is one of the most detailed 3D printers you can get for $500 bucks -- but it’s not perfect.”

Up until very recently, consumer-level stereolithography printers were essentially the unicorns of the 3D-printing world. For years, there were only a few of them for sale to consumers, and they were typically far too expensive for most 3D-printing enthusiasts to afford.

Thankfully, that’s starting to change. Over the course of the past year or so, resin-based printers have begun to trickle into the consumer market with increasing frequency — and that includes a few highly affordable options.

Case in point? The Anycubic Photon, one of the first SLA/DLP printers to hit the market with a price tag under $500. But can a cheap printer really compare to industry standouts like Ultimaker, Lulzbot, and Formlabs? We took one for a spin to find out.

The Anycubic Photon won our award for the best products of the year. Make sure and check out all our other selections for Best Products of 2018.

Second, it’s tiny. Unlike most consumer 3D printers, the Photon is roughly the size of two shoeboxes sandwiched together, and can therefore fit comfortably on your desktop. Unfortunately, this tiny footprint also means the printer has a correspondingly tiny build area, so you won’t be printing anything bigger than 4.5 x 2.5 x 6.1 inches (115 x 65 x 155 millimeters) with this machine.

It’s far more detailed than even the most high-end FDM printers we’ve ever tested.

Luckily, the Photon makes up for its minuscule build area with some incredible resolution/accuracy stats. It’s capable of printing layers thinner than 10 microns, making it far more detailed than even the most high-end FDM printers we’ve ever tested.

To top it all off, the Photon also comes equipped with a 2.8-inch touchscreen interface, which makes it far easier to adjust settings and initiate prints.

Setting up an SLA/DLP printer is notably different from setting up an FDM printer, but the good news is that, in the case of the Photon, it’s also easier.

The printer comes all but fully assembled, so getting it ready for your first print is a breeze. It’s essentially two steps: Install and manually level the build plate, then attach the resin vat.

Unfortunately, the build plate leveling process isn’t automated in any way, but it’s still relatively simple to complete. To make sure you set the Z-axis home point at the correct height, Anycubic prompts you to place a piece of printer paper on the LCD screen, then lower the build plate until you feel resistance when you move the paper. It’s not the most polished system, but it works, and can be completed in just a few minutes.

Once you’ve finished the leveling procedure, all that’s left is to install the resin vat and fill it up with the included resin. This only requires loosening and tightening a pair of knob screws, so you don’t even need tools to make it happen.

Don’t let the fact that this printer only costs $500 fool you. It’s astonishingly well-built for a printer that’s so budget-friendly. The build plate and resin tub, for example, are made from machined aluminum, while the machine’s frame is made from stamped sheet metal. Nothing about it feels cheap.

The printer lacks many of the thoughtful design elements that are common on higher-end machines.

The design, however, is fairly basic. Aside from the touchscreen interface, the printer lacks many of the thoughtful design elements that are common on higher-end machines. For starters, there’s no automatic resin filler, so if your goo starts to run low, you’ll have to pause the print and add more yourself. The Photon also doesn’t have any sort of peel or wipe mechanism, which increases the likelihood of print errors.

It’s also worth mentioning that this machine is designed to use a DLP process instead of true SLA. This means that instead of flashing a laser dot into the resin and moving it around to trace the shape of each layer, the printer uses an LCD screen to cure an entire layer at once. This translates into some minor (but notable) differences when it comes to print quality, which we’ll discuss later.

All things considered, this printer is very well-built, but lacking slightly in terms of design — at least from an engineering and performance perspective. Based on look and feel alone, it’s nearly impossible to tell that the Photon only costs $500, but if you scrutinize some of the technical elements, you can begin to see where Anycubic cut corners. Still, this is a helluva lot of printer for the price.

The Photon’s onboard UI is about as simple and straightforward as they come. The menu directory is extremely bare-bones, so you’d be hard-pressed to get lost or confused. Plus, it’s all touchscreen, so navigating between menus is highly intuitive. If you can use a smartphone, you can use this printer.

Anycubic’s proprietary slicing program, called Photon Slicer, is also quite simple — if not a little bit on the primitive and utilitarian side. It’s not very pretty to look at, and feels a bit like using a CAD program from 1997, but the upside is that it’s also quite minimalist. There aren’t a ton of options for you to get lost in, which makes it very easy and approachable for novice users. Even without any prior experience with the program, we managed to fire it up and get our first 3D model prepped within just a few minutes.

The Photon has been getting a good deal of hype over the past few months, and after testing it out for a couple weeks, we’re here to tell you that the hype is completely and totally warranted. This printer punches way above its weight class.

For our first print, we skipped the usual 3DBenchy benchmark and tossed the Photon straight into the deep end with a ridiculously high-detail “Bearded Yell” statue. This print eats FDM printers for breakfast, and typically comes out with all manner of aberrations, over-extrusion artifacts, and considerable loss of detail, so we were excited to see if this little SLA printer could do any better.

Much to our delight, the Photon made printing the model look like a cakewalk. There were a couple spots where printing errors occurred, but the remaining 95 percent of the model was practically flawless. Fine details — like the wrinkles on his forehead, individual hairs in his eyebrows, and the shallow depressions in his molars — were all reproduced with astonishing accuracy. The surface finish was so good that it was nearly impossible to distinguish one layer from the next. In some cases, people we showed it to in the office didn’t realize the model was 3D printed.

Our second test model (a super-high-detail castle) came out even better. Without a magnifying glass, we couldn’t even make out individual layers. Tiny elements, like the merlons and crenels of the castle’s battlements (which were so small that they would’ve legitimately been impossible to reproduce on an FDM printer) came out perfectly. The only other machine we’ve tested that’s capable of such incredible detail is the Form 2, which costs $3,200.

This printer provides an incredible amount of bang for your buck when it comes to resolution and surface finish.

There were, however, a few minor issues. In both of our first two test prints, certain sections came out looking squished, like someone had flattened them with a hot iron or hit them with a belt sander. These errors were caused by an incomplete peel — when the resin solidifies after being struck by UV light, but sticks to the bottom of the resin vat more firmly than it does to the printed part, so it doesn’t peel off completely when the printer moves on to the next layer.

Because the Photon doesn’t have a peel mechanism (some printers will tilt one end of the resin vat so the part peels gradually from left to right, rather than pulling straight up and peeling all parts at once), it’s more prone to these kinds of errors. Still, despite the fact that the Photon doesn’t peel carefully, we only experienced these errors to a very small degree.

The other thing to note is that, due to the fact that this is a DLP printer, it’s also prone to voxelization. Simply put, this is basically the 3D version of pixelation. The UV light on this machine is emitted from a pixel-based LCD screen, so on a microscopic level, it can’t actually make smooth curves. Imagine trying to build a sphere out of Legos. It’s like that, just on a really small scale.

Luckily, in the case of the Photon, this voxelization is so small that you don’t really notice it unless you’re looking for it. It’s like watching movies on a giant TV. If you get really close, you can see the pixels, but at a normal distance, they’re practically nonexistent.

The Photon is, without question, one of the best printers you can get for 500 bucks.

It’s definitely not on the same level as high-end printers like the Formlabs Form 2 when it comes to features and reliability, but in terms of sheer print quality, it’s only a couple steps behind. If you printed the same object on both machines and put them side by side, most people wouldn’t be able to see a difference. That’s pretty damn impressive.

If what you’re after is the most detailed, high-resolution prints for the least amount of money, then look no further. This printer provides an incredible amount of bang for your buck when it comes to resolution and surface finish.

However, it’s also worth noting that resin printers aren’t for everyone. Resin is sticky, messy, and a pain in the ass to clean up. You have to soak finished parts in isopropyl alcohol to remove uncured resin, and wear nitrile gloves to avoid touching it directly. In other words, SLA printers are relatively high maintenance, so if you’re averse to post-processing or plan on printing in high volumes, we suggest sticking with FDM.

The Photon also isn’t the best choice if you need to print big, or even medium-sized objects. For that, we recommend spending your money on an FDM printer like the Monoprice Maker Select Plus, which boasts a far larger build envelope, but still costs less than $500.

For the most part, there aren’t very many components on this machine that are likely to wear out — aside from the nonstick FEP sheets on the bottom of the resin vat, which you’ll have to replace regularly anyway. The Photon doesn’t have a lot of moving parts, so as long as you keep the threaded rod oiled up and are diligent about maintaining the resin vat, it’ll likely last for years to come.

Hell yeah you should. There are a lot of ways to spend $500, and this is one of the best ones we can think of.

Rumor suggests AMD RDNA 3 may get an unexpected upgrade