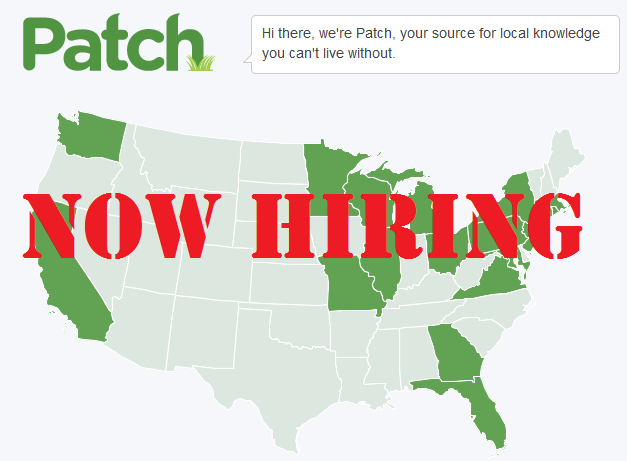 After severe job cuts last month and news that disgruntled ex-Huffington Post writers will sue, AOL is about to hire hundreds of new writers. According to Bloomberg, part of the site’s restructuring will include hiring up to 800 full-time new staff members for Patch, which focuses on localized content. Good news for unemployed writers out there – bad news for current AOL and Huffington Post freelancers, many of which the hiring spree will eliminate.

Patch is currently up and running for 19 states and some 800 communities, and newly appointed editor in chief Arianna Huffington says that “Each site will now have its own team. It’s always great and better to have a team.” Sure, except for Patch’s current local editor and various freelancers currently responsible for content who now must fear being replaced. But Huffington seems undaunted and committed to the overhaul AOL is going through post merger, and wants to heighten Patch’s social element.

Clearly, AOL is need of change, and change Huffington is bringing. But there are consequences, and those are coming in the form of bad press: Firing 900 employees, accusations of unpaid bloggers, and replacing current staff with 800 new hires doesn’t exactly speak to a positive work environment. Still, it might speak to a successful one. Huffington sounds determined to fully capitalize on local, something AOL hasn’t been able to do on its own, and this effort is being challenged directly into Patch’s restructuring. The Patch network has been an expensive investment for AOL and thus far hasn’t amounted to much. When something’s broken, you fix it. So many sites are doing local better, and Patch needs to play a little catch up. But is it too late? If so, then all this investment in new writers will do is create a media firestorm and throw more money at something that just won’t work. The platform hasn’t generated much attention, and reviving it might be a lot of effort for little payoff.

The best personalized newspapers to freshen up social media