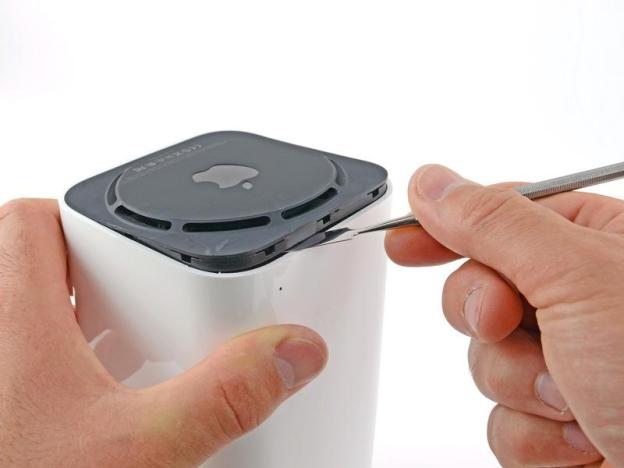 iFixit got its hands on Apple’s brand new AirPort Extreme A1521 that was unveiled at WWDC on Monday. In one of its classic “teardown” sessions, iFixit deconstructs the AirPort Extreme, concluding that it’s very easy to take apart and repair.

To start, iFixit disassembled the outer casing. This is a relatively simple affair, but it does require a Torx driver. iFixit also warns that the opening procedure requires a little bit of prying, and you could easily damage the casing itself if you’re not careful.

Once the casing was free, iFixit revealed an empty space within the center of the tower-like structure. The void is about 3.5-inches in size and perfectly accommodates an HDD of that size. Unfortunately, there isn’t any place to connect the HDD itself, and, even after opening the device fully, iFixit didn’t discover any hidden connection ports. iFixit designated three different sides for the device once the shell was off, pointing out the “port side,” the “slot side,” (which is the empty space), and the “fan side.” The fact that you must remove a number of screws just to clean the fan is a potential issue.

Many screws later, the group finally discovered the mainboard for the newest AirPort. The board contains a Broadcom BCM4360KLMG, which is the same IC that iFixit discovered when it performed its teardown of the 13-inch 2013 Edition MacBook Air. Located further behind the brushless DC fan is a standard 12 V, 5 A power supply. iFixit cautioned not to touch the little black box here, specifically with wet fingers, due to the potential shocking experience of 400 V jolt.

The final verdict from iFixit was a teardown score of 8 out of 10 (10 being the easiest to get into and repair). The group was pleasantly surprised with how simple it was to get into the device and noted it didn’t have to fool with any proprietary fasteners or parts to almost completely disassemble the tower-like creation. The good news here is that the AirPort appears to be fairly DIY friendly (if you have access to Torx drivers, spudgers, and a 54-bit driver kit).