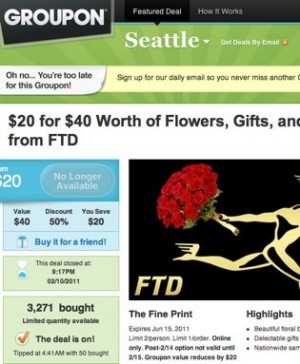 There’s more drama in the world of uber-discounter, Groupon.

Groupon recently offered it’s US customers a Valentine’s day coupon of $20 off on flowers from FTD. In order to collect on this coupon, purchasers were provided a dedicated Groupon page on the FTD website. Things went sour when a customer, “Carolina”, noted that the original list price marked on this page was $50, but the same product was actually available on the FTD homepage for only $40. It appeared that FTD was marking up the list price of the product in order to make the $20 off appear enticing, and meet the steep discounts required for Groupon deals, while continuing to make the same margin they currently offered on their website.

Groupon quickly voiced it’s intentions to correct the problem over at TechCrunch, offering refunds on the coupons, and for customers who already made a purchase from FTD, a refund on the markup difference.

Unfortunately, this public display of mishap seems only to feed the growing public sentiment that the deals orchestrated by companies like Groupon and LivingSocial are not good for business owners, and that they bring these scandals on themselves. A number of small business owners have come forward to share their experiences, saying that the sales staff of these companies openly encourage this practice in order to make more deals available. On the coupon-provider end of the exchange, it would appear that there is incentive for this type of behavior; the burden is left to the salesmen to make as many deals as possible. Managers approving the deals only see the details of the proposed listing, without any exposure to measures taken to make it work.

Not only does this type of circumstance bring Groupon one step closer to the traditional consumer wariness of retailers bloating prices only to offer massive “sales,” but after the big Super Bowl scandal, how many more “mix ups” can they handle before the magic wears off?