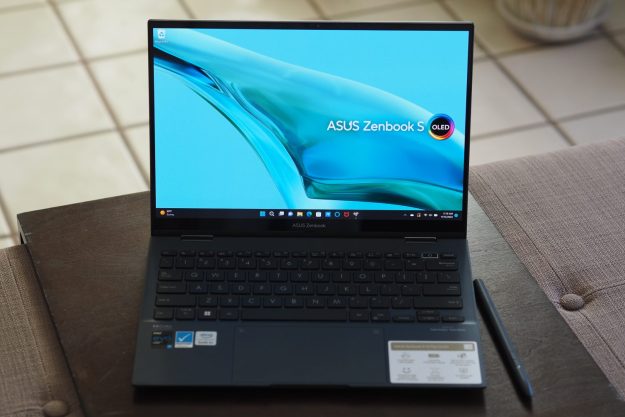 “The Asus ZenBook S 13 Flip puts an OLED display in a well-built, superlight 2-in-1.”

The “world’s lightest 13.3-inch 2.8K OLED convertible laptop.” That’s how Asus describes the ZenBook S 13 Flip, and if that sounds like a stretch to you, you’re not alone.

But setting aside the oddly specific accolades, the ZenBook S 13 Flip is a particularly light OLED laptop, coming in at just 2.43 pounds. There’s no doubt this convertible 2-in-1 is more comfortable to use with a pen than some heavier competitors, and it’s a solid offering all around. You’ll pay for the privilege, but if it’s in your price range, the $1,500 ZenBook S 13 Flip is easy to recommend.

The ZenBook S 13 Flip is a new model and is not yet available for sale. When it is, there will be just one configuration available in the U.S. that will cost $1,500 for a Core i7-1260P, 16GB of RAM, and a 1TB SSD. The specifications list more options, but those will be available outside the U.S., leaving this configuration as the sole — and solidly premium — option.

As I mentioned in my review of the LG UltraPC 17, an incredibly light and thin laptop with a very bendable lid and chassis, using magnesium alloy to create a featherweight machine often results in a less rigid frame. The ZenBook S 13 Flip somehow avoids that compromise, using magnesium to great effect while still boasting a lid and chassis that resist bending and flexing. The lid also opens with one hand, a real achievement for the hinge design given the lightweight bas. The ZenBook S 13 Flip is also comfortable to use in all four modes — clamshell, tent, media, and tablet.

The low weight matters most in tablet mode, where the ZenBook is easier to hold for inking than heavier convertible 2-in-1s like the HP Spectre x360 13.5 (3.01 pounds) and Envy x360 13 (2.95 pounds). That half a pound may not seem like much, but it makes a meaningful difference in practice. Asus also put some effort into making a great active Pen, with the Asus Pen 2.0 offering USB-C charging, 4,096 levels of pressure sensitivity, a fast 266Hz sampling rate, and less than 32ms of latency. It doesn’t have the haptic feedback built into Microsoft’s Surface Slim Pen 2 when used with the Surface Pro 9, nor does it benefit from that tablet’s 120Hz display refresh rate, but it’s still better than most.

Aesthetically, the ZenBook S 13 Flip is a departure from past designs. There are no concentric swirls on the lid, for example, which were once iconic to the ZenBook lineup. Instead, the lid is matte blue, matching the rest of the chassis, with just the new Star Trek-like ZenBook logo adorning the lid. The laptop’s lines are straight and minimalist, affording a more conventional design than the Spectre x360 13.5 with its gem-cut aesthetic.

In addition to being very light, the ZenBook S 13 Flip is reasonably sized thanks to small bezels on the sides and on top, as well as a bottom chin that’s not too chunky for a 2-in-1. It’s slightly smaller in width and depth than the Envy x360 13, while being thinner at 0.59 inches compared to 0.63 inches. Asus did a great job of minimizing the laptop’s size while retaining a large touchpad and full-size keyboard.

Speaking of the keyboard, the keycaps are large with great spacing, and the switches are light and snappy. There’s enough feedback to ensure a precise response, although the touch might be a bit too light for some people. It’s a good keyboard, but not quite up to the standards of the HP Spectre and Dell XPS lines. The touchpad is large and has quiet buttons with solid clicks — in fact, the buttons are too solid and require too much force to depress. Asus incorporated its NumberPad 2.0 LED numeric keypad that should be welcome to anyone who enters a lot of numbers, but it’s easy enough to ignore.

Connectivity is limited, unsurprisingly. It’s all USB-C with and without Thunderbolt 4, but the 3.5mm audio jack and microSD card reader are welcome given that some laptop makers (Dell, I’m looking at you) are dropping them. Wireless connectivity is up to date.

Finally, the ZenBook S 13 Flip incorporates a 1080p webcam, which is becoming more common lately. There’s an infrared camera for Windows 11 Hello passwordless login via facial recognition, and it worked reliably during my testing. A fingerprint reader is embedded in the power button for those who prefer that method.

Light, but fast and long-lasting

The ZenBook S 13 Flip uses a 28-watt Intel Core i7-1260p with 12 cores (four Performance and eight Efficient) and 16 threads, which is close to the upper range for Intel’s thin and light laptop chips. It’s a fast CPU that has done well in our CPU-intensive benchmark suite and promises excellent productivity performance.

The ZenBook S 13 Flip was especially fast when the laptop’s thermal tuning utility was set in performance mode. There was some thermal throttling, as expected, but even so, the ZenBook was a fast member of its class. It was quicker than Intel 9-watt and 15-watt processors with fewer cores and threads, which makes sense, and it competed well against the slightly faster-clocked Core i7-1280P. The Apple MacBook Air M2 couldn’t quite keep up, but the M2 has optimizations built into the GPU that make it quicker at certain creative applications than the Intel Iris Xe graphics in the ZenBook S 13 Flip.

The net result is a speedy little laptop that will excel at demanding productivity tasks. The integrated graphics will hold it back, though, in creative applications and gaming.

Battery life is something that often gets compromised in very thin and light laptops, but the ZenBook S 13 Flip manages to pack 67 watt-hours of battery inside its tiny chassis. That’s a lot for a 13-inch laptop, and so it competed strongly against laptops with lower-power Intel CPUs. It’s possible to squeeze out a full day’s battery life if you keep CPU utilization at a reasonable level. The MacBook Air M2 showed off the ARM processor’s efficiency and saw much better battery life.

According to my colorimeter, this isn’t the absolute best OLED panel we’ve seen. Its brightness, while fine, is less than some of the competition, and its contrast doesn’t lead the OLED pack. Its color width was excellent, though, and its accuracy just missed that mark. But those are quibbles. Compared to IPS displays, the ZenBook S 13 Flip’s panel is incredibly colorful with deep contrast and inky blacks. It’s excellent for productivity use, media consumption, and photo and video proofing, but not editing.

Audio performance is fine thanks to dual downward-firing speakers with Harmon Kardon tuning. It doesn’t live up to the MacBook Air M2’s higher-quality sound, but it’s fine for typical use. Listening to music and bingeing Netflix will benefit from a good pair of headphones.

A viable thin and light convertible 2-in-1 option

The Zenbook S 13 Flip has some strong competition as a convertible 2-in-1, particularly when matched up against the slightly more expensive HP Spectre x360 13.5 and less expensive HP Envy x360 13. But it hangs tight, providing excellent performance and strong battery life to go with its thin and light chassis. I’d go with one of HP’s offerings in this product category, especially with how affordable the HP Envy x360 13 is right now.

I wouldn’t blame you for opting for the ZenBook S 13 Flip either, though, especially given how light the chassis is when using it in its different modes.