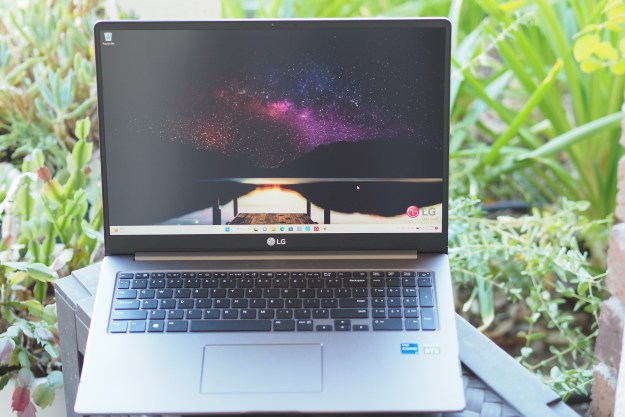 “The LG UltraPC 17 is plenty fast for its target audience and price, despite some obvious outdated design choices.”

The largest mainstream laptops you can buy today are 17-inch behemoths that offer huge displays and matching chassis. Usually, these machines are also more powerful, particularly among premium laptops, with faster CPUs and discrete GPUs that make them good for creative work. The LG UltraPC 17 is a mixed breed, with a lower-power processor and entry-level GPU that are fast enough to provide a boost, but not as fast as you’ll find on some of the competition.

That makes the UltraPC 17 an interesting laptop in the space. It’s great for multitaskers who can utilize the immense screen real estate, as well as for less-demanding creators thanks to its solid performance and very good display. It’s not cheap, but it’s also significantly less expensive than the more powerful 17-inch machines we’ve reviewed, making it a reasonable value.

A large laptop with a teeny-tiny touchpad

It’s highly unusual for me to start a review by mentioning a laptop’s touchpad, but the UltraPC 17’s version is downright comical. It’s a tiny thing sitting there like a small island in a sea of palm rest and, jokes aside, it’s hard to use. My fingers constantly slammed on the palm rest while I was reviewing the laptop, with my fingertips expecting touchpad buttons where there were none. It was an OK touchpad otherwise, but I never did get past the size.

The keyboard was better, with a full-size layout that included a numeric keypad. The switches were snappy with plenty of depth, although some people might find them too light. The keycaps were also a touch small, but I didn’t have any issues hitting the right keys. It’s not as good as the keyboards on the Dell XPS 17 or MacBook Pro 16, but it’s good enough.

The UltraPC 17 is a large laptop, naturally, thanks to its 17-inch 16:10 display. But it’s larger than it could be, with a chunky bottom chin that adds to its depth. The XPS 17 also has a 17-inch 16:10 display. and yet it’s smaller in width and depth, the latter by a full inch, thanks to tiny bezels all around. And that’s unfortunate because, otherwise, the UltraPC 17 is thin enough at 0.78 inches versus the XPS 17 at 0.77 inches and considerably lighter than the XPS 17 at 4.3 pounds versus 4.87 pounds. The UltraPC 17’s display bezels are also plastic, which detracts from an otherwise modern appearance of minimalist lines with chamfered dark chrome edges that add some panache.

In terms of its construction, the all-aluminum UltraPC 17 has more flexing in its lid and keyboard deck than the sturdier XPS 17. The lid, in particular, gives in to minor force and shows some LCD distortion. The hinge is smooth, and the chassis base is heavy enough that it’s no surprise the lid opens with one hand. I’d rate the UltraPC 17 as less rigid than I expect in a $1,600 laptop.

Connectivity was less than I expected to see. While there are plenty of ports, including an unusual, wired Ethernet connection, the lack of Thunderbolt 4 support is glaring. Also, while the microSD card reader is good to have, a full-size reader would have been more useful for creators. Wireless connectivity was up to date, though.

The UltraPC 17 mates a 28-watt Intel U-series 12th-gen CPU with a low-end discrete GPU, the Nvidia RTX 3050 Ti. That puts it a step behind the XPS 17 and the MSI Creator Z17, which use 45-watt Intel H-series processors and faster discrete graphics. The performance difference was quite apparent in our suite of benchmarks, which we ran in both normal and performance modes using the LG utility. The UltraPC 17’s fans spun up in performance mode but weren’t terribly loud, and they managed to cool things down and provide significantly higher performance.

The most pertinent test for creators is the Pugetbench Premiere Pro benchmark that runs a live version of Adobe’s Premiere Pro video-editing application. Here, the UltraPC 17 did well enough to make it useful for less demanding creative workflows, but it fell behind the rest of our comparison group. Note that the LG is less expensive than the other laptops, quite a bit so in some cases like the MSI Creator Z17 that’s $3,00o or more. That means you’re getting a good performer with a large display for a reasonable price.

If the UltraPC 17 is going to work for creators, then its large display also needs to provide wide and accurate colors, good brightness, and deep contrast. And in my testing, I saw the same kind of results from the display as in my performance tests.

According to my colorimeter, the display was plenty bright and offered excellent contrast for an IPS display. The color gamut was just wide enough for creative work, while its accuracy was good but not excellent. Like its performance, the UltraPC 17’s display quality is suitable for less demanding creators but not as good as some others.

The UltraPC 17’s 720p webcam is disappointing, given that more modern laptops are migrating to higher resolution 1080p versions. And the laptop’s dual downward-firing speakers put out serviceable, but not stellar audio. It’s good enough for YouTube videos and system sounds, but not much else.

Living long on the road

If you’re interested in the UltraPC 17 primarily for portable productivity work, then battery life will matter to you. The laptop has 80 watt-hours of battery to go with a CPU that offers better efficiency than the faster chips found in many 17-inch laptops. Given all that, as well as its medium-resolution IPS display, I expected decent battery life.

What I got was much better. The UltraPC 17 fell behind the AMD-powered Lenovo ThinkPad Z16, but it came in second place among the Intel pack. It did particularly well in the PCMark Applications test, where it hit a competitive 13.5 hours. This test best predicts typical productivity battery life, so it seems entirely possible to get a full day’s work on the road if you’re not pushing the CPU or GPU too hard.

Dialing in an attractive laptop

The LG UltraPC 17 isn’t the fastest 17-inch laptop nor is it the longest-lasting, and its display is better than average yet not the best you can buy. But it’s good enough in each of these aspects to make it an attractive laptop for demanding productivity users and moderately demanding creators.

It’s also reasonably affordable at $1,600. That’s more than much less competent 17-inch machines like the Asus Vivobook 17X, but it’s less than faster laptops like the Dell XPS 17 and MSI Creator 17P. It slots into an attractive spot in the large laptop field and is well worth consideration.