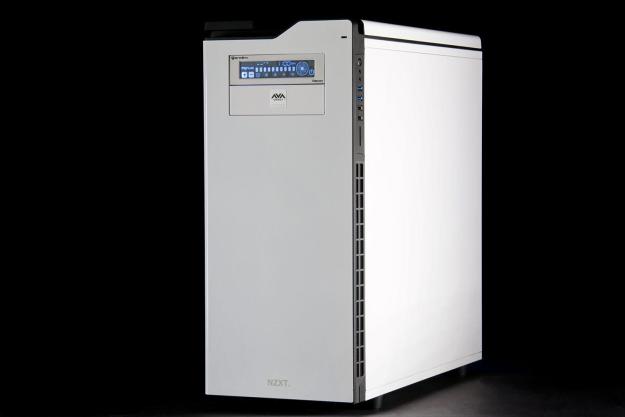 “If you want a gaming PC that’s as stealthy as it is quick, you won’t hear a peep out of AVADirect’s Z97.”

High-end computers have become massively powerful thanks to Intel’s new eight-core processor and Nvidia’s efficient yet quick GTX 980. These components make computers built even a year ago look slow by comparison.

Yet most expensive PCs still suffer a basic flaw: noise, and lots of it. The recently reviewed Origin Millennium destroyed our benchmark records but also threatened our eardrums with its howling fans. A loud computer can be tolerable in an office, where the noise blends into the background, but at home you’ll hear every last decibel.

The AVADirect Z97 Quiet Gaming (yes, that’s its name, not just a description) is built to combat that. It offers an Intel Core i7-4790K, 16GB of DDR3 RAM, and a GTX 980 video card. This combination, which is priced around $2,800, is not as extreme as the multi-GPU rigs we’ve recently looked at, but it should be easier to cool.

The AVADirect Z97 Quiet Gaming is the least extravagant gaming desktop we’ve recently reviewed. It features no external LEDs aside from a backlit touchscreen used to control fan speed. There’s no case window. And nothing found on the exterior indicates what’s inside. Instead the system is a sheer white case that looks built to withstand bullets instead of cool components (though we hear it is not, in fact, bulletproof — so don’t try that at home).

This change in style is designed to better dampen fan noise and control airflow, but it helps the Quiet Gaming stand out from the crowd. Yes, this desktop is more reserved than most, but no one is going to mistake it for a Dell Inspiron. AVADirect’s rig is a nice middle ground between extreme systems like Origin’s Millennium and hopped-up home PCs like the Acer Predator series.

We should note, though, that the enclosure is not custom but instead an unmodified NZXT H630. Buyers who want a unique computer will need to look toward Alienware or Origin.

The front right side of the case provides easy access to four USB ports, two of them 3.0, along with headphone and microphone jacks and the power button. Unlike some competitors the Z97 Quiet Gaming does not provide a tray or shelf for placing a smartphone or peripherals. It also does not have a topside fan vent, so owners can place items on it or above it without worrying they will spill inside the system.

Around back lurk six additional USB ports, four of them 3.0, along with 5.1 audio, S/PDIF, Ethernet, a PS/2 port, and numerous video ports including three functioning DisplayPort outputs. This is far from the best connectivity we’ve seen in a desktop, but it’ll be enough for most owners. AVADirect offers a broad range of alternative motherboards (more than 20 at the time of this writing) so users who need more connectivity can pick a different board.

The simple exterior leads to a simple interior. We found the hard drives at the front and the motherboard at the rear, and case airflow moves from the front intake to the rear exhaust. Anyone with a basic understanding of PC hardware can open this rig and quickly identify the location of every component.

We counted a total of seven fans, not including those dedicated to the CPU and GPU.

Hardware is easy to replace, too, thanks to clean cord management and a rack of hard drive bays that are angled for easy access. A hard drive can be added or replaced within minutes. The video card is a five-minute job. Even the processor can be switched without removing the motherboard. Only the RAM is tricky; the large CPU cooler obscures two of the slots and must be removed to access them.

Though built to be quiet, AVADirect’s rig does not lack adequate cooling. We counted a total of seven fans, not including those dedicated to the CPU and GPU. Many are mounted in the middle of the case rather than the front or rear. These too are easy to remove, providing owners the option to further tweak cooling and noise levels.

AVADirect’s rig is modest compared to others we’ve recently reviewed. The Core i7-4790K processor was not overclocked, for example, and had “only” four cores. Predictably, this resulted in strong but not outstanding performance in our benchmarks.

The most relevant comparison is the Falcon Northwest Talon, which we reviewed earlier this year with an overclocked Intel quad-core. As you can see, that older system actually beat the Quiet Gaming by a hair despite the fact the latter has a new processor. Origin’s eight-core Millennium runs away from the pack, but it’s also twice the price.

Compression benchmark from 7-Zip reported similar results. We measured a score of 26,681 from the Quiet Gaming rig, just behind the Talon’s result of 27,615. The Maingear Vybe scored 19,902 while the Origin Millennium scored an astounding 50,754. Geekbench hit a single-core score of 4,024 and a multi-core score of 15,332.

This rig is as quick as any single-GPU desktop available today.

Our review’s primary storage was a pair of Kingston Hyper X solid state drives in RAID providing a total of 223 gigabytes of usable space. The pair hit a quick but not spectacular average read speed of 336.9 megabytes per second. Access times were under two milliseconds.

The AVADirect also had a two-terabyte Western Digital Black Series mechanical drive that scored an average read speed of 128.8Mbps with an average access time of 12.3 milliseconds. Those are the second-best numbers we’ve seen from a mechanical hard disk.

While the Quiet Gaming arrived with a GTX 980 the card was not a standard design. Instead it came packing a Gigabyte Windforce GTX 980 with a custom triple-fan cooler that led 3DMark to a Fire Strike score of 11,661 and a Cloud Gate score of 29,820. Those numbers are an improvement on the stock GTX 980, which scored 10,665 in Fire Strike and 24,510 in Cloud Gate.

3DMark is only a synthetic test, so we fired up several real-world games to see how the AVADirect Z97 Quiet Gaming handles them. Each game was tested at 1080p and 4K resolutions.

Still, this result is the best you can expect from a modern single-GPU configuration and beats a rig with a stock GTX 980 by an average of three frames per second at 4K/ultra detail.

Perhaps bottleneck is not the right word. The game was smooth at any setting and the results beat those we obtained from a single stock GTX 980 last month.

Does it live up to its name?

Noise is always a concern with a desktop computer, but in this case it’s an absolutely critical trait. This rig is called the Quiet Gaming, so it’d better be just that.

And it is. We recorded about 41 decibels of noise at idle, a figure that’s loud enough to be noticeable but below the category average. The Falcon Northwest Talon was just as quiet in our testing, but that company has a habit of building systems that are quieter than the norm. Most rigs are a few decibels louder.

The difference widens at load. Even the quiet Talon produces up to 46.8 decibels while playing a game, but the Quiet Gaming emits only 42.5dB. That’s a minor increase over idle and the lowest result we’ve ever recorded from a gaming desktop.

Power draw was modest, as well. We recorded up to 65.2 watts at idle and 384 watts at load. That’s a lot compared to an average consumer desktop, but it’s on par with most gaming rigs we’ve tested and far less than an extreme configuration such as Origin’s Millennium, which drew up to 684 watts at full load.

The AVADirect Z97 Quiet Gaming works as advertised. It provided excellent performance for a single-GPU gaming desktop yet emitted less noise at load than any gaming desktop we’ve tested.

Importantly, the pursuit of quiet operation doesn’t disrupt the system’s other functions. The layout is standard and easy to upgrade, there’s a decent selection of ports, and the many fans are placed in logical, accessible positions.

There is just one small downside: the price. Our review unit rang up at $2,830. About $200 of that sum is dedicated to parts that make the system quieter, like the touchscreen fan controller and the noise-isolating enclosure.

A Falcon Northwest Talon is $50 less expensive when similarly configured and will provide better performance because the company offers free processor overclocking. A similar Origin Millennium is slightly more expensive but comes in a custom case with configuration options AVADirect can’t match.

These competitors stop AVADirect from running off with the mid-range gaming desktop crown. Still, the Z97 Quiet Gaming is the obvious choice if you want to play in peace.