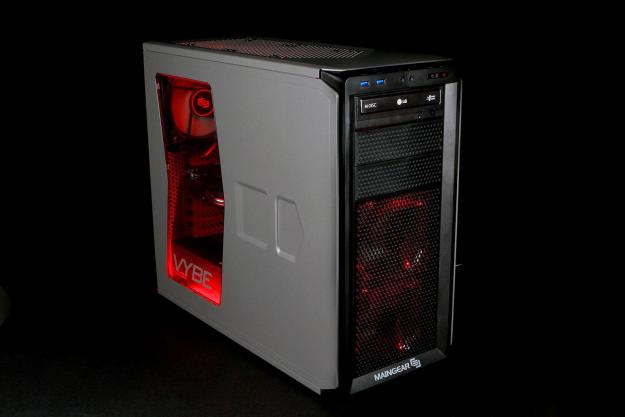 “Maingear’s Vybe is well built, very expandable, and quite powerful. However, at $2,000 in our review configuration, it’s a bit pricey.”

When we recently looked at Digital Storm’s pre-configured gaming rig, the Vanquish II Level 4, we liked the level of performance it delivered for its relatively modest $1,259 price. But that system, while it was built around a roomy Corsair Graphite Series 230T case, had few upgrade options, and not enough USB ports, thanks to its small Mini ITX motherboard.

The Maingear Vybe Z97 is a very similar machine to the Vanguish II—at least on the outside. It shares the same Corsair case, albeit with a red paint job on the inside. But the Maingear is more configurable than the Vanquish II.

It’s not the best value if you’re trying to get the most gaming performance for your money.

The company equipped our Vybe review unit nicely, including a full-size Gigabyte board that has plenty of ports and connectors for future expansion, as well as a powerful AMD R9 290 graphics card. They also stuffed it with a roomier SSD than the Vanquish II we just reviewed.

The Maingear rig also has more bells and whistles, including a liquid-cooled, overclocked CPU, internal lighting (that’s arguably too bright), and the aforementioned red interior paint job, which also spills over to the back of the case. It’s an attractive system to be sure, and Maingear has done a good job keeping the build clean, with cables and wires routed behind the motherboard.

But while the Vybe has an edge in most of our benchmarks, at $1,999 in our review configuration, it’s not the best value if you’re trying to get the most gaming performance for your money. A quick look at Newegg tells us that that the price for our review system’s parts currently adds up to around $1600, as of this writing. While the Vanquish II has fewer expansion options and a somewhat lesser CPU and graphics card, it delivers plenty of power for gaming at 1080p for significantly less ($1,259).

However, Maingear’s “Angelic Service,” which includes lifetime labor support, phone support, and a 1 year warranty, is better than the standard year of coverage you’ll get from a mainstream Dell tower. It also sounds better than what you get with Digital Storm’s Vanquish II, which is 3 years of labor, and a year of part replacements.

A cool grey exterior, with fire in the belly

Unlike the Vanquish II, the Vybe has a red paint job on the inside, which makes the system stand out a bit more, even with the case closed. The red internal shell carries over to the back of the machine as well. The red aesthetic doesn’t stop there though. The Vybe also has four red LED fans; two in the front for intake, and two on the top panel for exhaust. Then there are two internal LED strips (one up top and one linking the case’s bottom), which show off the Vybe’s components through the side window.

Between the four red fans and the two bright red LED strips, the light show is arguably overkill, outputting a lot of red light. At night, it would probably be a bit blinding. We’d suggest doing without the light strips when configuring the system. Skipping the lights will also shave $39 off the system’s price, and you’ll still get plenty of glow from the case fans.

Overall, Maingear’s machine isn’t the flashiest system we’ve seen lately (that distinction goes to Origin’s high-end Millennium tower), but the Vybe is more distinctive on a desk than the Vanquish II, and certainly more visually interesting than most desktops you’ll find in big-box stores.

You pop off the side of the case by removing a thumb screw from the back, and pulling the door forward. While this is a mid-tower chassis, there’s lots of room for expansion. The 250GB Samsung 840 Evo SSD and Seagate 1TB hard drive are surrounded by three empty 2.5-inch (SSD) bays, and three spare 3.5-inch (mechanical hard drive) bays. There are also a pair of vacant external 5.25-inch bays in the front, below the USB ports, audio jacks, and the vanilla DVD drive.

You won’t be able to fill all those empty bays with the three spare SATA connectors on the Vybe’s Gigabyte G1 Sniper Z97 motherboard though. However, this system is much more expandable than Digital Storm’s Vanquish II, which has a smaller Mini ITX motherboard. Our review unit only had one vacant SATA port.

The Vybe also has a much better external port selection than the Vanquish II. Around back, you’ll find seven USB ports (four of them 3.0), as well as a PS/2 port for an old peripheral. The gaming-centric Killer E2201 Gigabit LAN port should deliver solid Internet and network connectivity (there’s no Wi-Fi here).

The Vybe is more configurable than Digital Storm’s Vanquish II machines, which come pre-configured for quick shipping. Still, the Vybe comes in three distinct flavors, based around different chipsets. The “Good” model starts at $749, and features the budget-focused H81 chipset (the same one used in all Vanquish II systems), along with 8GB of RAM, a 500GB hard drive, and a mid-range Nvidia GTX 750 graphics card.

The Maingear Vybe is well equipped to handle just about any task.

The mid-range “Better” configuration uses Intel’s newest Z97 chipset, and starts at $1,125 with a Core i3 4330 CPU, a 1TB hard drive, 8GB of RAM, and an AMD R7 260X graphics card. Our review unit also falls into the “Better” category, but sports twice the RAM as the base model (which isn’t necessary for gaming ,or much else unless you frequently work with huge files), adds a 250GB Samsung Evo SSD, a higher-end (and fairly new) Intel Core i5 4690K CPU, and a powerful AMD R9 290 graphics card.

There’s also a “Best” option, which utilizes Intel’s highest-end X79 chipset and starts at $1,599. But unless you’re looking to configure a very high-end system with three (or more) graphics cards for 4K gaming, we’d steer clear of the X79 option, especially since that chipset is likely soon to be replaced by Intel’s X99 chipset.

The good thing about a configurable system is that you can tweak the build to dial in just the parts and performance you want (or can afford). Here, if we were trying to get the best performance for 1080p gaming (with a little overhead to keep future games running smoothly), we’d drop down to 8GB of RAM, which shaves $89 off the asking price, and maybe opt for an Nvidia GTX 770, which takes $48 off the price of our review configuration.

The R9 290 is undoubtedly a more powerful card when it comes to gaming. But if you’re going to be gaming on a 1080p screen, the GTX 770 is more than sufficient (as we saw in the Vanquish II review) for the task. If you’ve got a 1440p (generally 27-inch) screen though, the R9 290’s extra performance is definitely worth paying for.

And if you’re thinking about stepping up to 4K gaming, which pushes four times the pixels of 1080, you’ll need something much more powerful to game at high settings. For that, you’ll need a second graphics card, as well as a higher-end power supply than the 750 watt EVGA SuperNova that shipped in our review unit.

Overclocked and ready to rock

The Vybe’s quad-core Core i5-4690K CPU isn’t going to break benchmarks, but it’s fairly powerful for what amounts to a mid-range chip (compared to Core i7s). Plus, Maingear has made use of the system’s liquid cooling capabilities to overclock our review system to an impressive 4.66GHz.

7-Zip’s file compression test saw the Vybe’s overclocked CPU do pretty well, scoring 19,902, which is a fair bit better than the Vanquish II’s score of 15,841. But the Origin Millennium’s six-core CPU stomped all over these lesser machines, turning in a result of 38,704 on the same test.

Teamed up with the Vybe’s other ample components, it handled our gaming benchmarks with ease at 1080p.

In our SiSoft Sandra Processor Arithmetic test, the Vybe scored a fairly high 109.2GOPS, which easily bests the Vanquish II’s mark of 80.8 GOPS. However, neither system can match up with the 222.92 GOPS scored by the six-core Origin Millennium machine.

PCMark 8’s storage test turned in a score of 4,989, which is a breath ahead of the Vanquish II’s 4,974. That isn’t surprising, considering both systems use a Samsung 840 Evo drive.

The Maingear’s single Asus R9 290 graphics card is no match for the Millenium’s trio of high-end Nvidia GeForce GTX 780 Tis. The Vybe’s 3DMark Cloud Gate (20,808) and Fire Strike (9,172) scores easily best the lower-priced Vanquish II, which scored 16,766 and 6,685 on the same tests, respectively. The Origin Millennium’s grade of 39,759 in Cloud Gate crushes everything else we’ve tested to date—as it should, given that configuration’s nearly $7,000 price. However, Fire Strike doesn’t properly support three graphics cards (just like many games), so the Millennium’s score on Fire Strike isn’t as impressive, at 8,957.

Gaming at 1080p isn’t a problem at any setting

The Asus Direct CU R9 290 graphics card in the Vybe isn’t the most powerful one you can buy–that honor goes to the dual-GPU AMD R9 295×2. But the R9 290 still sells for more than $400 on its own as of this writing, which should tell you that it’s no gaming lightweight. Teamed up with the Vybe’s other ample components, it handled our gaming benchmarks with ease at 1080p.

Also, even when gaming or maxing out the CPU, our sound meter never picked up the system above the background noise in our office. Although, with air conditioning running and normal office chatter going on, the place was pretty loud when we were testing, hovering around 58 dB.

With Battlefield 4 set to Medium detail, the Vybe matched the Vanquish II’s average framerate of 143 FPS. Setting detail to Ultra produced an average of 81 FPS for the Vybe, with a minimum of 67 and a maximum of 141. That bests the Vanquish II’s average of 67 FPS, 57 FPS minimum, and 100 FPS max. So even if you’re a framerate purest who prefers to live above 60 frames per second, the Vybe will serve you well when gaming at 1080p.

The Maingear Vybe is well equipped to handle just about any task, from professional content creation, to gaming at and above 1080p at high settings. But if gaming at 4K is your aim, you’ll want a more powerful configuration with multiple graphics cards.

The Vybe is also much more upgradable than Digital Storm’s Vanquish II, thanks to its full size ATX motherboard, with loads of expansion slots and ports for adding a trio of additional drives. It’s also reasonably quiet under load, thanks to its liquid-cooled CPU.

But if your main aim is to game at 1080p and high settings, and you aren’t likely to add in your own drives or other components later on, there are other systems that will deliver a similarly impressive gaming experience at a much lower price.