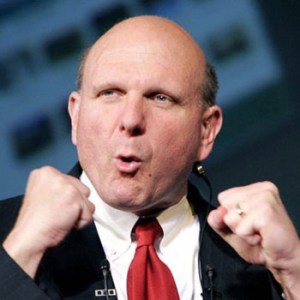 Greenlight Capital’s president David Einhorn has called for an end to Steve Ballmer’s tenure as Microsoft’s CEO. The influential hedge fund investor, who in 2008 predicted the downfall of Lehman Brothers, said of Ballmer: “We’ve seen what you can do.”

In a speech at the Ira Sohn investment conference in New York on Wednesday, Einhorn went on to say, “His continued presence is the biggest overhang on Microsoft stock.” Ballmer has been at the helm of the computer giant since 2000.

According to a Wall Street Journal report, Einhorn said it was unproductive research and development at Microsoft, among other things, that was causing the company problems. In further comments, he said Ballmer was “stuck in the past,” which has caused the company to fall behind in areas such as online search and social networking.

An FT report points out that David Einhorn is the first shareholder of note to publicly call for an end to Ballmer’s tenure at the top. In his presentation, Einhorn said that he believed Microsoft still had great potential, but that changes need to be made. Cloud computing is one area where Microsoft could excel, he said. Also, following its link-up with Nokia, there was an opportunity for significant success in the smartphone market.

As the FT says, Microsoft shares have remained largely stagnant over the last ten years, and it is this fact which is of continuing concern to investors. Share value has even been on the decline since the Seattle-based company bought Skype for more than $8 billion earlier this month. As some analysts speculated as to what Microsoft might do with a company that lost $7 million last year, others couldn’t work out why Ballmer was so excited about the acquisition. Soon after the takeover, Microsoft founder Bill Gates turned up in an interview to take some of the heat of Ballmer, saying he himself had advocated the purchase.

It remains to be seen whether David Einhorn’s words have any influence on the board of Microsoft and so, for the time being at least, it’ll be business as usual for Steve Ballmer when he wakes up this morning.