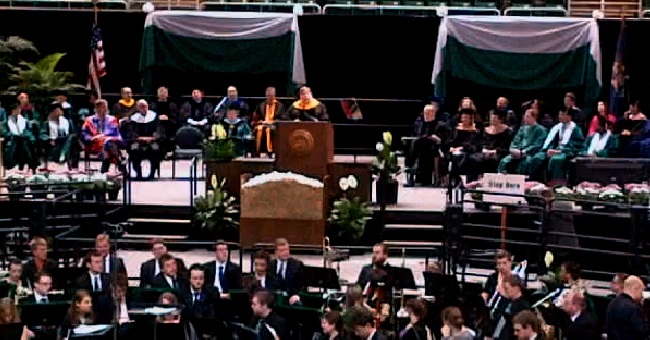 Yesterday afternoon, Apple cofounder Steve Wozniak spoke to Michigan State University graduates as he received an honorary doctorate of engineering from MSU for his many accomplishments in the personal computing industry. However, toward the end of his mostly positive commencement speech, he warned graduates that the computers he’s helped create will soon make us irrelevant as a species.

“Every time we invent a computer to do something else, it’s doing our work for us, making ourselves less relevant,” said Wozniak, in his usual upbeat tone. “The cyborgs are winning! The androids are winning!”

Wozniak continued: “Artificial intelligence will in the future become more and more like a real person, like a friend you would want to go and meet. Somebody that can talk to your face; somebody that can understand things [and] knows the kind of jokes you like; [somebody] that knows what sort of things to say depending on how slowly you’re talking then; a real person.”

“One of the things is, you’ve got to have human senses,” continued Wozniak. “How does a computer ever create art, for example, if it can’t sense things that a human understands, like the wind on a beach. Well, our computers have gotten hearing and seeing, they’ve got feeling, touch sensitive; they can sense motion, just like our inner ear. Pretty soon we’re going to have holograms, which are much better than what you call 3D television. We’ve created a new species; no question. We’re creators and, like I said, we’re making ourselves less relevant.”

Strangely, though Wozniak spoke in an upbeat tone, he seemed a bit bothered that his creation, the personal computer, was going to make us all irrelevant. Yet, he seemed joyful and wanted graduates to help computers learn to speak and write poetry. I imagine any creator would have mixed feelings about his creation.

The first portion of the speech, which is embedded below, painted a much less bleak future for the human graduates. The Apple co-founder detailed his own college experiences, being one of the only Silicon Valley pioneers who went back to college, and told encouraged graduates to do things because they’re passionate, not for the cash or fame.

And in the end, The Woz has a simple equation for happiness: H = 3F. It stands for “Happiness equals food, friends, and fun.” Just try to have the fun while we’re still relevant. Oh, and Go Spartans!

One of Apple’s very first computers fetches record-breaking $905,000 at auction