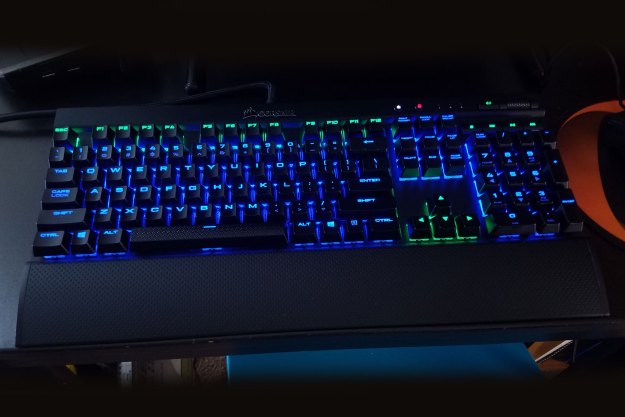 If there’s one thing PC gaming requires, its performance. But the associated peripherals need to be just a responsive, because input lag could cost the gamer points or even the match itself. To combat that, Corsair has built the K70 RGB Rapidfire, a full-size mechanical keyboard based on Cherry’s MX Speed RGB switches. These switches promise faster keystroke inputs compared to Cherry’s other switches for PC gaming, like the MX Red and MX Black. There’s no question that the keyboard lives up to its “Rapidfire” name, but at $170, it’s one of the most expensive gaming keyboards around. Is it worth the price? We put it to the test in our comprehensive Corsair K70 review.

Consider it the Porsche of mechanical keyboards

The Corsair K70 RGB Rapidfire has no dedicated macro keys, but Corsair stuffs a few media keys in the upper right corner. For starters, there’s an extremely handy volume wheel mounted in the corner along with a mute button sitting to its left. Located under the volume wheel are four dedicated keys for media control — Stop, Backward, Play/Pause, and Forward. These four buttons reside in a special spot above the number pad, under the volume wheel.

About a quarter-inch of space separates each key, providing space for the Cherry MX Speed switch LEDs to spill their illumination around each key. Add a clear typeface to each key cap, and you have one gorgeous lighting system that looks great in both ambient light and dark PC gaming caves.

The keyboard features a report rate switch, which adjust how fast the Cherry MX Speed switches respond. It has four selectable speeds and a BIOS mode. This feature essentially controls how many times the keyboard updates the PC with input information. Some PCs and games simply can’t handle ultra-fast input, so the switch lets you adjust the report rate accordingly, to get the fastest speed possible without causing issues.

The report rate is typically referred as a keyboard’s “polling rate.” For the Corsair K70 RGB Rapidfire, users can switch between 8ms (125Hz), 4ms (250Hz), 2ms (500Hz), and 1ms (1,000Hz). The BIOS Mode switches the keyboard into a compatibility mode, so that the device can work on older PCs sporting a motherboard that doesn’t support modern PC gaming mechanical keyboards.

The keyboard ships with a detachable “soft-touch” wrist rest. Technically, it’s not soft to the touch, but is patterned with small, shallow divots to provide a sense of softness when in fact it’s just a hard, plastic surface with small indentations. The drawback to these divots is that they can collect junk such as dust, kid funk, and whatever your hands pick up from day to day. This can get ugly and eventually require something like a toothbrush to clean.

The K70 RGB Rapidfire is crazy fast, as the Cherry MX Speed RGB switches do not disappoint.

A similar texture covers the spacebar, though instead of shallow divots, the space bar uses jagged vertical lines to create a rough texture. The keyboard also ships with a keycap puller and two sets of contoured keycaps using a similar texture. Provided for right-handed FPS and MOBA gamers, these two keycap sets promise “maximum grip” and an “enhanced” feel for all those heated multiplayer moments.

On a whole, the K70 RGB Rapidfire is a solid mechanical keyboard sporting an aircraft-grade anodized brushed aluminum frame. Each keycap feels comfortable to the fingertip, confining fingers to each letter without feeling rigid and protruding. And because this is a mechanical keyboard, the switches provide a dull thumping each time users press a key. They’re not sharp and clicky to the ears, but they’re loud enough to keep your significant other up all night if they’re trying to sleep in the same room.

Customization arrives in the name of CUE

At the heart of Corsair’s K70 RGB Rapidfire is the company’s Corsair Utility Engine (CUE) software. Free to download and use, the tool provides all the customization aspects including the lighting system, creating macros, assigning commands to specific keys, and more. The CUE interface breaks all of this down into a toolbar on the left and the main window on the right.

The toolbar lists the default profile and all other profiles created by the user, the Actions section, the Lighting Effects section, and the Performance section. It also provides small clickable buttons to create a new profile, create a new folder for organizing profiles, copying profiles, importing and exporting profiles, downloading custom profiles from Corsair, and more.

You can edit the default profile by attaching a custom profile icon, adding a background image, and turning the tabs transparency up or down to give the interface a personal touch. There’s a field for linking the profile to games, so it starts when the game is launched. The default profile is generally set aside for everyday use, and gamers are encouraged to create individual profiles for each game.

The Actions section is where users can assign commands to keys, create and assign macros, use a key to launch a specific program, launch a timer, quickly switch profiles, and more. For instance, we assigned the ALT + F1 keystroke to the Home button, which allows us to take a screenshot via Nvidia’s GeForce Experience tool. To bring up the GeForce Overlay using the Insert button, we chose “Keystroke” and typed ALT + Z into the text field. The Remap Key option also supports mouse buttons.

Look at all those pretty colors!

The Corsair K70 keyboard supports 13 different lighting effects and 16.8 million colors. The effects include Spiral Rainbow, Rainbow Wave, the Cylon-like Visor, Color Wave, and even two specific to Corsair’s Void headsets. Type Lighting either lights up a single key as they’re pressed, or creates an explosion of color around a pressed key like a colorful atom bomb. Users can tweak all lighting effects such as setting random colors, changing the effect speed, setting two alternating colors, and changing the effect direction (if supported).

The keyboard is highly durable, and the key switches will last forever.

What’s really cool about the Lighting Effects aspect is that users can stack effects. For instance, in our Star Wars Battlefront profile, we first created a lighting effect for the movement keys, assigning them with a static green color and calling the effect “movement.” Next, we created four additional lighting effects for each special ability, assigning a distinct color for each assigned key. We rounded off the profile with a “background” lighting effect using the Rain preset, dimmed colors, and a medium raindrop speed.

The Performance section of each profile deals with the Win Lock button and its associated commands. On this panel users can choose to disable the Windows key and three keyboard commands: ALT + TAB, ALT + F4, and SHIFT + TAB. Users can also change the lock indicator colors for OFF and ON too. Generally, disabling the Windows key prevents the Start menu from popping up and causing annoying video issues and game disruption.

However, we need to provide one note about all the colors, key assignments, and settings. None of this is available without the CUE software running in the background. The only details that users can save in the keyboard’s on-board memory is static lighting, and whatever users set in the Performance section.

The Corsair K70 RGB Rapidfire is crazy fast. Sometimes that’s a good thing, and sometimes it’s not. That’s because the Cherry MX Speed RGB switches mounted under the key caps have an actuation point of 1.2 millimeters (mm). This is where the keystroke is registered and sent over to the PC before the key is fully pressed. The actual distance a key must travel between its idle position and making a full electrical contact is around 3.4mm.

By comparison, Cherry’s highly-popular MX Red switches have an actuation point of around 2.0mm and a key travel (actuation distance) of around 4.0mm. This means the Cherry MX Speed RGB switches are more sensitive, due to the shorter travel time to the actuation point, and shorter travel time to the hard registration point. Cherry says the MX Speed RGB switch is 40 percent faster than its standard MX switch.

We noticed the slightest weight on a key would trigger its actuation. In other words, when your fingers are resting on the keyboard and you’re reading something on the screen, the highly responsive keys could lead to gibberish or deleted sentences in a document if you’re not paying attention to the weight of your fingers.

There’s no question the keyboard lives up to its “Rapidfire” name, but it’s not exactly cheap.

For an extremely fast typist needing to quickly dictate the boss’ speech on the fly, the MX Speed switches should be ideal. But for the average typist, they might be overkill, and in some cases an annoyance. Then again, the average typist probably wouldn’t spend $170 on a gaming keyboard.

When gaming, the fast key stroke helps whenever twitch reactions are a factor. Every stroke of a key meets an immediate reaction. It may sound odd, but the difference is noticeable, especially when compared to mechanical keyboards that use long-stroke key switches. Will it make you a better gamer? Probably not. But the faster perceived reaction can feel reassuring after you’ve downed a few energy drinks.

We can confirm that the keyboard correctly recognizes 10 keys when they are pressed simultaneously. Anti-ghosting is seemingly a thing of the past anyway, and this test proved that PC gamers can quickly cast their multi-key commands without ghosts typing in rogue keystrokes. In the past, anti-ghosting was a sign that the keyboard wasn’t registering the switch actuations properly and were receiving multiple keystrokes, or strokes from keys that weren’t pressed by the user.

Corsair provides warranty information on its website. Corsair will cover the keyboard for up to two years after purchase regarding defects in the material and workmanship. In other words, if it doesn’t work as advertised, then Corsair will repair or replace the keyboard, or refund the customer’s money. But don’t wait too long — Corsair will keep 10 percent of that money as a “usage” fee for each year since the date of purchase.

Corsair’s K70 RGB Rapidfire mechanical keyboard lives up to its name. It’s highly responsive due to the use of Cherry MX RGB Speed switches, and is ideal for not only PC gamers who demand super-fast input, but typists who need a “sensitive” keyboard for quick and accurate text input. That said, it may be over-sensitive for customers looking for a flashy new keyboard for general use.

As stated, the keyboard switches have a durability of 50 million keystrokes. For PC gamers, certain keys will wear out before others, but that’s still a long lifespan if you’re not playing in tournaments each day. That said, the $170 pricetag should be a worthwhile investment for the next several years. Given the MX Speed RGB switch is rarely used, competing products may be scarce for a while.

Yes, if you have $170 to spend on a mechanical keyboard dedicated for PC gaming. The keyboard is attractive, the keys are responsive, and the switches will last forever, making this peripheral a great buy.

Best wireless keyboard deals for May 2022

The best CPU benchmarking software for 2022