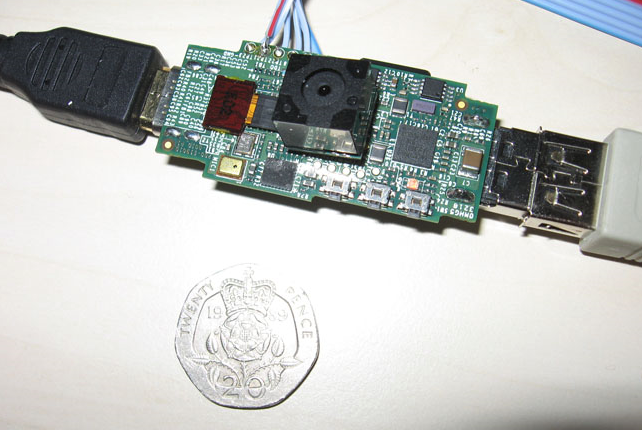 David Braben, British game developer and co-founder of Frontier Developments, has created an ultra-low cost computer the size of a USB stick called Raspberry Pi. The expected price would be a measly $25 for a fully-configured system. He says he’s developed the PC in order to encourage the pursuit of computer programming in children.

But what can you expect from a system that comes for less than the cost of a video game? The tiny PC sports an HDMI port at its head and a USB port at its tail, giving it the ability to be plugged into a TV, hooked up to a USB keyboard or combined with a touch screen for a low cost tablet. The computer packs a 700MHz ARM11 processor with 128MB of SDRAM. As far as graphics go, it runs OpenGL ES 2.0 and has 1080p output.

At the stage the prototype is in now, developers seem to be favoring the Linux based Ubuntu OS for Raspberry Pi’s initial equipment; which means OpenOffice, Firefox, GIMP for image editing etc., all ready for a user to play around with.

Braben feels that the way schools teach children about computers leaves them uninspired, that too much gets in the way of their enthusiasm; today’s computer classes only prepare kids to navigate office jobs. He says these low cost PC will allow children to do typical things such as go on Facebook or tweet, but it will also give them the freedom to become creators of products they typically consume.

A BBC article says that there’s a lot of work needed for the Raspberry Pi and compares David Braben’s project to the One Laptop Per Child idea, which attempted to distribute $100 laptops to developing world children. The laptop program has had problems delivering on the prices it advertised to governments.

Braben believes he’ll be putting out the little computers within a year. The distributing will be done by the Raspberry Pi Foundation, a new charitable organization.

Topics
iCloud might be sending your photos to strangers’ computers
USB-C charging laptops: Here’s what you need to know
How to insert a signature in Apple Pages
Beware — even Mac open-source apps can contain malware
The most innovative tech products of 2022
Why I refuse to buy The Callisto Protocol on PC, even with an RTX 4090
Nvidia and AMD GPU prices could skyrocket again in 2023. Here’s why
How to safely overclock your Intel or AMD CPU
ChatGPT: how to use this viral, often hilarious AI chatbot
What does the lock mean on Snapchat?
I replaced my MacBook with a Quest Pro for a full work week. Here’s what happened
How to post a Short on YouTube
How to block people on Snapchat