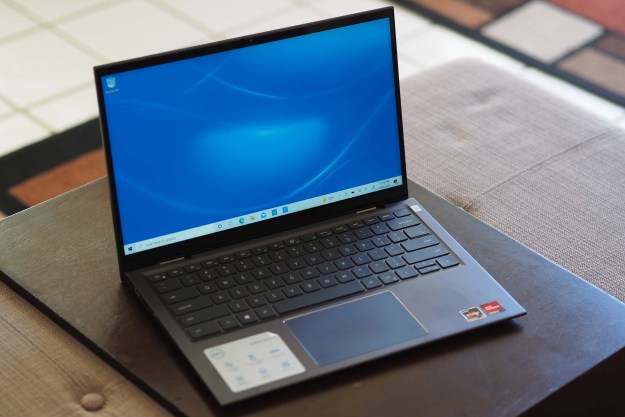 “The Dell Inspiron 14 2-in-1 is a good laptop with a less-than-good display.”

The 14-inch laptop is an increasingly popular size. It offers a larger display than 13-inch laptops, but a much smaller chassis than 15-inch machines. It’s also gaining popularity among convertible 2-in-1s, again offering more screen real estate for things like digital inking while being far less cumbersome than 15-inch 2-in-1s. Dell gets that, and its newest Inspiron 14 2-in-1 fits right in.

I reviewed the Inspiron 14 2-in-1 with an AMD Ryzen 7 5700U CPU and a 16:9 Full HD display. It carries a $1,000 price tag, which is not budget by any means –it actually borders on premium territory. And while the 16GB of and 512GB solid-state drive (SSD) sweeten things a bit, the Inspiron 14 2-in-1 has a lot to live up to. While it performed well and had impressive battery life, its display holds it back — making its price a challenging hurdle.

The Inspiron 14 2-in-1 is constructed of a mix of aluminum in the lid and plastic in the chassis, and it manages its materials to give it a mostly robust feel in hand. The lid flexes just a bit under pressure and there’s some display distortion — never a good thing — but the keyboard deck and bottom chassis are solid. It’s built well enough for the price, and considerably better than the Asus VivoBook Flip 14 that’s about $300 less (with a lower-end Ryzen 5 CPU and half the ). The $735 Lenovo IdeaPad Flex 5i 14 was just as well-built and thus proves that you don’t have to spend $1,000 or more for solid build quality, while at the same time the $1,100 clamshell Acer Swift X had more flexing in the lid and keyboard deck. Go figure. The Inspiron 14 2-in-1’s hinge was stiff, requiring two hands to open, but it held the display firmly in its four positions — clamshell, tent, media, and tablet — and it props up the keyboard deck for a comfortable typing angle and extra airflow.

Aesthetically, the Inspiron 14 2-in-1 comes in two colors in the AMD configuration, Pebble Green and Mist Blue, and just Platinum Silver in its Intel incarnation. My review unit was Mist Blue, and that’s a little deceiving — the laptop is actually two-toned, with the Mist Blue covering the lid and a dark gray (or brown in some lighting) covering the bottom chassis. The display top and bottom and chassis front and rear edges are rounded, but the angles are simple, giving the laptop a minimalist appearance that’s attractive enough without standing out. The display bezels aren’t as small as I’d like along the top and bottom, but they’re not overly huge and don’t detract too much from a modern appearance. The Asus VivoBook Flip 14 and Lenovo IdeaPad Flex 5i are both similarly understated. The HP Spectre x360 14 stands out as being much more elaborately designed, but it’s also considerably more expensive.

In terms of its size, the Inspiron 14 2-in-1 is thin enough at 0.64 to 0.71 inches depending on where you measure, and it’s right in the ballpark for 14-inch convertible 2-in-1s at 3.43 pounds. The Asus VivoBook Flip 14 comes in at 0.72 inches and 3.31 pounds, while the Lenovo IdeaPad Flex 5i is much thicker at 0.82 inches and almost as heavy at 3.3 pounds. The Inspiron 14 2-in-1 is a little deeper than it could be, given the slightly large bezels, but it’s a comfortable size overall. There’s nothing to complain about here.

Connectivity is a mixed bag. There’s a full-size HDMI port, a USB-A 3.2 Gen 1 port, and a USB-C 3.2 Gen 1 port along the left-hand side, and another USB-A 3.2 Gen 1 port, a 3.5mm audio jack, and a microSD card reader along the right-hand side. The problem with this configuration is that the laptop charges via USB-C (and given the AMD chipset, it doesn’t support Thunderbolt 4), and with only one such port, you’ll need a dongle of some kind to both power the machine and connect to USB-C devices. Legacy support is strong, though. The usual Wi-Fi 6 and Bluetooth 5.0 handle wireless duties.

AMD’s Ryzen 5000 series of CPUs continues to dominate against Intel’s 11th-gen Core U-series processors, which is what you’ll find in thin and light . The Inspiron 14 2-in-1 equips either the 6-core/12-thread Ryzen 5 5500U or the 8-core/16-thread Ryzen 7 5700U, which is what powered my review unit. It’s interesting that the Ryzen 5 version with 8GB of and a 256GB SSD is $200 less, making it an interesting alternative.

There are reasons to question the Inspiron 14 2-in-1’s price, but performance isn’t one of them.

The Inspiron 14 2-in-1 performed well in our suite of benchmarks, coming in just behind the Ryzen 7 5800U and ahead of the Ryzen 5 5500U. It was particularly strong in our Handbrake test that converts a 420MB video to H.265, finishing it in 116 seconds compared to the HP Pavilion Aero 13 with the speedier Ryzen 7 chip that finished just four seconds faster. The Inspiron also did well in Cinebench R23, another CPU-intensive test, coming in behind the faster , but not by much. PCMark 10 Complete went as expected with a score of 5,411, and its Essentials, Productivity, and Content Creation scores were in line with the competition.

There’s nothing to complain about in terms of performance. The Inspiron 14 2-in-1 will burn through your more challenging productivity workflows, and it will even do well for a thin and light without a discrete GPU in your creative tasks. There are reasons to question the Inspiron 14 2-in-1’s price, but performance isn’t one of them.

Gaming isn’t the Inspiron 14 2-in-1’s strength. Its Radeon Graphics scored just 1,247 in the 3DMark Time Spy test, slightly behind the Intel Iris Xe graphics in the HP Spectre x360 14. It managed just 27 frames per second (fps) in Fortnite at 1080p and high graphics, which is in line with the class but not an impressive performance. You can play some games on the Inspiron 14 2-in-1, just be ready to turn graphics way down.

There’s a certain display standard that should meet if they’re going to cost $1,000 or more. That’s particularly true with a laptop that has the performance chops to meet the entry-level needs of creative types — the display should be at least average in all respects.

While the Inspiron 14 2-in-1’s display seemed OK during my testing, we don’t do anything that needs a lot of color. Our review process is productivity-oriented unless we’re reviewing with even faster CPUs and discrete GPUs that are aimed at creators. So, although I thought the brightness was a little low and I disliked the old-school 16:9 aspect ratio (I love the trend toward taller 16:10 and 3:2 aspect ratios), I had no other major complaints.

The Inspiron 14 2-in-1’s display was the most disappointing aspect of the machine.

However, my colorimeter wasn’t impressed. First, brightness was indeed low at just 238 nits, well under our preferred 300 nits that ensures a display will be bright enough for all indoor conditions. The contrast was good at 1,090:1, exceeding our 1,000:1 threshold for premium displays, but the low brightness still limited how much black text popped against white backgrounds.

It’s when I looked at the display’s colors that I was disappointed. The panel had narrow colors at just 52% of AdobeRGB and 69% of sRGB, although they were fairly accurate at a DeltaE of 1.81 (less than 1.0 is considered excellent). Premium (or near-premium) tend to have 72% or higher AdobeRGB and 95% or higher sRGB. The Asus VivoBook Flip 14 and Lenovo IdeaPad Flex 5i had similarly poor colors and brightness, with less contrast, making them just a little worse than the Inspiron 14 2-in-1’s. But again, they’re also considerably less money.

The Inspiron 14 2-in-1’s display was the most disappointing aspect of the machine. It’s unfortunate that Dell didn’t put in a better panel, because then it would really live up to its promise of an affordable machine for creatives to do their more lightweight work. As it is, it’s just OK for basic productivity tasks, and even then, you’ll be disappointed when viewing photos and videos.

The audio was loud enough at maximum volume, but there was considerable distortion — the most I’ve heard on a laptop in some time. Mids and highs were therefore broken up, and combined with the lack of bass, it made for an unpleasant experience. Headphones are a must for anything other than system sounds.

The Inspiron 14 2-in-1’s keyboard was wide and spacious, with large keycaps, attractive lettering, and usable three-step backlighting. The keys had plenty of travel and the switches provided a light, snappy feel. My only complaint is that they were perhaps too light, making the bottoming action seem abrupt. Even so, I’d rate it as a good keyboard, if not in the same class as Dell’s XPS or HP’s Spectre lines.

The touchpad was large with a comfortable surface, and it supported Microsoft Precision touchpad drivers (which is interestingly listed as an option in Dell’s spec sheet). I found it to provide precise and reliable support for Windows 10’s full suite of multitouch gestures. The display is touch-enabled, as with all 2-in-1s, and it supports Dell’s Active Pen. The pen is optional and wasn’t included in my review unit; it should really be included at this price point.

Windows 10 Hello support is provided by a fingerprint reader embedded in the power button, just like on Dell’s latest XPS machines. It worked well, with just a press of the power button both waking up the laptop and logging you in. For privacy, there’s a physical shutter that slides over the webcam.

You can choose either a 41 watt-hour or a 54 watt-hour battery for the Inspiron 14 2-in-1, and my review unit was equipped with the latter. That’s a decent amount of power for a 14-inch laptop with a Full HD display, and I expected good if not great battery life.

Overall, battery life was a real strength of the Inspiron 14 2-in-1. It will get you through a full day’s work and then some, letting you do some Netflix bingeing in the evening before plugging in.

The Inspiron 14 2-in-1 is a difficult laptop to rate. It’s well-built and looks good, and it provides excellent performance and long battery life. Those are good enough to warrant the $1,000 price, just barely. However, the display is a letdown, and that creates a dilemma.

If your productivity workflow is demanding and you don’t care about wide colors, then the Inspiron 14 2-in-1 will meet your needs in an exemplary fashion. The problem is, you can spend the same or less money and find with similar performance and better displays. I’ll mention at least one in the following section. I’ll recommend that Inspiron 14 2-in-1, but with some serious qualifications.

The Asus ZenBook 13 OLED UM325UA is one laptop that offers an outstanding display to go with superior performance and battery life. It’s not a 2-in-1, but it’s about the same price for a color-accurate OLED display, a faster AMD Ryzen 7 5800U CPU, and a 1TB PCIe SSD.

The Asus VivoBook Flex 14 is almost as fast as the Inspiron 14 2-in-1 and has a similar display, but it’s $300 less. Its build quality isn’t quite as good and it has half the and storage, but if you’re looking to save some money, but still have a well-performing productivity workhorse, then the VivoBook is a good option.

The Inspiron 14 2-in-1 is built well enough that you should expect years of productive service. The same goes with its components, which are modern enough to keep Windows 10 (and Windows 11) running for quite some time. (It’s too it lacks 4, though.) The one-year warranty is disappointing, as usual, but the industry standard.

Yes. The Inspiron 14 2-in-1 is fast and power-efficient, but the display’s poor brightness and colors limit its usefulness for creators. If you don’t care about wide colors, then it works well as a productivity machine without any creative aspirations.