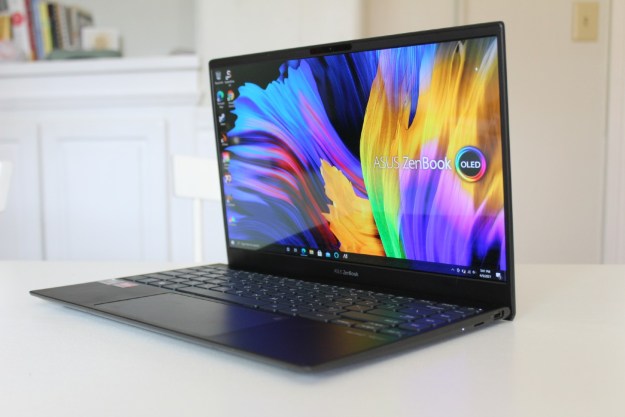 “The Asus ZenBook 13 OLED is a must-buy laptop, so long as you don't need a headphone jack.”

I may have found the perfect laptop. Or, at the very least, something that comes very close.

It’s not made by Apple, Microsoft, or even Dell. It doesn’t even look particularly remarkable from the outside. When I pulled the Asus ZenBook 13 OLED out of its box, I fully expected it to be another solid midrange laptop.

Then I tested the 1080p OLED screen. And benchmarked the AMD Ryzen 7 5800U processor inside. And then noticed how long it lasted on a single charge.

The Asus ZenBook 13 OLED has it all. Almost. Despite a couple of flaws, the ZenBook 13 OLED (UM325) is a laptop all potential buyers should consider when it becomes widely available in May.

The look and feel of the Asus ZenBook 13 OLED is its least stand-out feature. It is by no means a bad-looking laptop — but if you’ve seen a ZenBook, you’ve seen this one. I’m not a huge fan of the concentric circle on the lid or the plastered logo on the front, but it’s one of the prettier Asus has made recently.

That’s especially true once you crack the lid open and see what the laptop offers inside. Everything is laid out beautifully, including the oversized touchpad and new keyboard. The layout and keycaps are reminiscent of HP’s Spectre — but that’s not a bad thing. The extra column of keys under the power button provides some extra functionality, and the keycap font feels modern and clean.

At 0.55 inches thick and 2.5 pounds, the ZenBook 13 OLED is both thinner and lighter than most of its rivals, including the Dell XPS 13, HP Spectre x360 13, Surface Laptop 3 13, Razer Book 13, and MacBook Pro 13-inch. That makes for one highly portable laptop, that’s great for on-the-go usage. Even if it’s just moving from room to room, the small footprint is convenient.

Despite the size, the chassis is robust. You can feel some bend if you use extra force, but it’s nothing you’ll notice in daily use. The hinge opens with one finger and is lifted off the table when open, giving a slight ramp for comfortable typing. I don’t normally like these kinds of lifted hinges, but Asus pulled it off in a way that isn’t distracting or ugly.

The aspect ratio of the screen is the one major downside to the design of the ZenBook 13 OLED. It uses 16:9, which has gone out of style in 2021 in favor of taller, more productivity-minded sizes like 16:10 or 3:2. Going back to 16:9 makes the screen feel squat. More importantly, the size means the screen has a chubby chin bezel below. It’s not an eyesore, it’s just not quite as modern-feeling as the Dell XPS 13 or Razer Book 13.

Asus has decided you don’t need a headphone jack on your laptop.

My last complaint with the design of the ZenBook 13 OLED is ports. For some inane reason, Asus has decided you don’t need a headphone jack on your laptop. If Asus was going for a more minimalist setup, I suppose that would make sense. But the ZenBook 13 OLED has HDMI and USB-A. Yeah, it’s a strange choice that will probably infuriate people who didn’t realize it was lacking a headphone jack until they needed it.

Fortunately, Asus includes an adapter in the box, though that puts you down one of your two available USB-C ports.

The Asus ZenBook 13 isn’t the first 13-inch laptop to feature an OLED screen — that was the HP Spectre x360. This laptop is, however, the first to implement a 13-inch 1080p OLED screen. That’s a big deal, as it means OLED panels are getting cheaper — and hopefully getting out to more people.

It’s not that the ZenBook 13 OLED is super cheap, but compared to the models that OLED has been exclusive to. What’s the big deal with OLED? Well, you’ll know the difference when you see it in person. With OLED, pixels are individually let, meaning black levels and contrast ratio blows conventional LED out of the water. It’s not even close, especially on a glossy screen like this one.

The OLED panel feels like the future of laptop displays.

397 nits is plenty bright to deter reflections, but it’s the colors that really make this display pop. 100% in both sRGB and AdobeRGB color spaces is unheard of in a 1080p screen, and the color accuracy is among the best I’ve ever tested with a Delta E of 0.49. Photographers may bemoan the lack of a option, but they definitely won’t complain about the colors.

The display isn’t touch-enabled, which is common on 1080p screens.

When it comes to panels and calibration, the ZenBook 13 OLED is the future of laptop displays.

The same can’t be said of the speakers. The chintzy audio comes from below the laptop, pointed right down at your table or lap. The sound is muddled, especially compared to any of the MacBooks. That’s always going to be a problem with speakers in this location.

I am very happy with the inputs on the ZenBook 13 OLED. I already mentioned the look of the keyboard, but it’s also thoroughly precise and enjoyable to type on. The layout is comfortable and the 1.4mm of key travel feels heavenly compared to many of the 1mm keyboards out there.

The keyboard doesn’t include a fingerprint reader, which is an odd feature to have left off a premium device.

My only issue was with backlighting. There are three levels of backlighting brightness, but there are some noticeable uneven spots. It’s quite bright over the center zone, while others are dimmer. It’s too bad.

The touchpad is similarly successful. It’s extra-wide but does excellently with palm rejection while typing. Tracking is smooth, as are gestures. My one nitpick? The click is a bit louder than I like. It’s especially noticeable if you’re coming from a MacBook.

The laptop feature a shoddy 720p webcam above the display. It’s no surprise how bad it is, but this should be reserved for emergencies only. It does include a built-in IR camera for Windows Hello facial recognition, though.

Thanks to AMD’s new Ryzen processors, the Asus ZenBook 13 OLED has remarkable performance for a laptop of its size. My unit came with the Ryzen 7 5800U, an eight-core processor with a base clock of 1.9GHz. Add in 16GB of and a TB of SSD storage, and you’ve got quite a capable little computer.

This is the first laptop I’ve tested with this chip, and I wasn’t disappointed. It’s a meaningful bump over last year’s Ryzen 4000 processors, and it maintains a healthy lead over Intel’s offerings. That’s especially true in multi-core performance, of course, thanks to the extra cores and threads offered by AMD’s 7nm chips.

What good is that for real-world performance? All the listed above will excel in daily work activities such as multitasking, web browsing, Office applications, and videoconferencing. That’s to be assumed.

But the reason the Asus ZenBook 13 OLED beats its rivals in PCMark 10 is primarily because of its excellent content creation performance. If you’re looking to run some creative applications on the side such as Photoshop or Lightroom, the ZenBook 13 OLED is going to surprise you by how speedy it is with these heavier tasks.

The ZenBook 13 OLED continues to make an undeniable case for going with AMD in 2021.

It even makes for a decent video production machine. It’s 41% faster than the Razer Book 13 in H.265 video encoding in Handbrake, which shows what a huge difference those extra cores make. It’s even 7% faster in Handbrake than last year’s Ryzen 7 4800U when I tested it in the Lenovo IdeaPad Slim 7.

Now, obviously, the ZenBook 13 OLED will never compare well against a 15-inch laptop with a discrete graphics card in real-world video editing. Even a modest 15-inch laptop like the HP Spectre x360 15 (Core i7-10750H / GTX 1650 Ti) was 45% faster in PugetBench’s Adobe Premiere Pro benchmark. That’s also where the incredible performance of the MacBook Pro M1 really shines, which is just as fast as the Spectre x360 15 in the same test.

Still, the ZenBook 13 OLED continues to make an undeniable case for going with AMD in 2021, especially if you’re not interested in switching to MacOS.

Battery life is the final trick up the sleeve of the ZenBook 13 OLED. It lasted for an astounding 15 hours and 46 minutes in our web browsing test, which is as good as it gets for a laptop of this type. That was true of last year’s AMD , and it remains true again this year. It beat the HP Spectre x360 14 by almost 9 hours and the XPS 13 by 7 and a half hours. It’s even just 19 minutes behind keeping up with the MacBook Pro!

Meanwhile, the ZenBook also lasted 15 and a half hours while looping video. That’s another test that the MacBook Pro M1 dominates in, lasting over 21 hours. But again, compared to many of the best Intel , the ZenBook 13 OLED is at least 3 or 4 hours ahead.

Of course, your mileage may vary depending on how hard you’re pushing the system. Using the ZenBook 13 OLED as my daily driver for almost a full week, I found it easy to get through a day of work without a charge, with enough juice left to handle a few hours the next morning as well.

In nearly every category that matters, the Asus ZenBook 13 OLED is well ahead of the competition. The OLED screen is a stand-out feature, but so is the AMD-powered performance and the fantastic battery life. Do I wish it had a headphone jack and a 16:10 screen? Of course. But the strengths more than make up for those faults.

The one caveat is the pricing, which hasn’t yet been finalized. Some international pricing has suggested that the base configuration will be around $1,000, while our souped-up model will likely be a few hundred dollars more.

The most choice is the MacBook Pro 13-inch with the M1 chip. It’s cheaper, faster, and has a higher resolution screen. It doesn’t have the OLED screen of course, nor does it include a USB-A and HDMI port.

But if you’re not interested in switching to Mac, the Dell XPS 13, HP Spectre x360 14, and Razer Book 13 all offer a competitive package. The XPS 13 is still the most beautiful of the bunch and would still be my choice between the four .

The Asus ZenBook 13 OLED should last you at least four or five years. The 16:9 aspect ratio will continue to look a bit outdated into the future, but the chassis and components are all robust and futureproof.

Yes. It’s one of the most exciting of late, especially if you looking for an AMD-powered device in 2021.