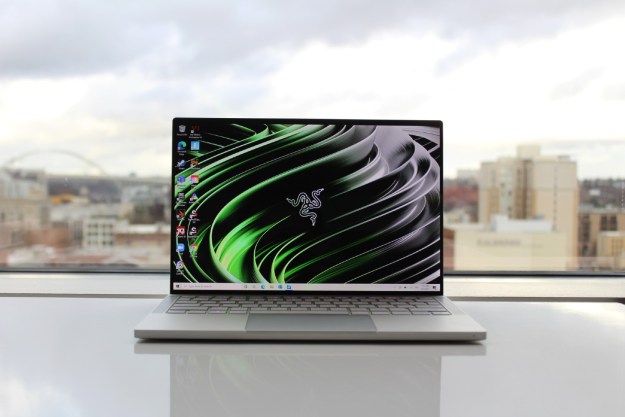 “Razer's debut nongaming laptop does nearly everything right if you can stomach the price.”

Razer products have never been gaudy with their design. Take away the RGB lights and snake logo, and you might not know it had some gaming muscle under the hood.

That’s why the Razer Book 13 felt so inevitable. This 13-inch laptop finally ditches the gaming trappings entirely, again with the exception of the Razer logo. It can’t play games, but it does include everything you’d want in a modern laptop. The Razer Book 13 features a 16:10 aspect ratio with superthin bezels, as well as the latest 11th-gen Intel Tiger Lake processors.

Can Razer really compete in this category with industry veterans like Dell, Apple, and HP or has the company bitten more than it can chew?

The Razer Book 13 is the first true nongaming laptop from the company, though it has dabbled in the category before. The Razer Blade Stealth was the brand’s first 13-inch laptop, and the Razer Book looks nearly identical to it. What’s the same? They’re both made of solid unibody aluminum and come in very similar dimensions. They’re both 0.6 inches thick, use the same keyboard and touchpad, and have identical port selection.

The Razer Book 13 is slightly lighter, though, coming in at 2.95 pounds. That’s both thinner and lighter than the MacBook Pro 13-inch, though a bit heftier than options like the Dell XPS 13 or Surface Laptop 3 13.

The Razer Book 13 is absolutely gorgeous to look at.

The Razer Book 13 does have a few new tricks up its sleeve, though. The standout feature is the 16:10 aspect ratio display, complete with ultrathin bezels. Taking cues from the Dell XPS 13, the chin hides part of its bottom bezel by using a dropped hinge.

In 2021, this design is becoming more and more common — but that doesn’t make the Razer Book 13 any less gorgeous to look at. I quite like the silver-and-white color combination, too.

The white keys lit up by the per-key RGB backlighting makes the design stand out — and is a feature you’d never find on a laptop from Dell or Apple. Not only are the colors customizable through Razer Synapse, but they also come with an insane 15 levels of brightness control. That even trounces the control that Apple offers.

It’s not a huge deal, but when the competition is this tight, every extra feature counts.

Another highlight for the Razer Book 13 is port selection. Unlike the XPS 13 or MacBook Pro 13-inch, the Razer Book 13 includes a couple of convenient legacy ports that most people will prefer to have. HDMI and USB-A are both included, alongside two Thunderbolt 4 ports — one on each side. That means you can connect displays and power cables through either side, unlike the MacBook Pro M1, which puts both USB-C ports on the same side.

If you need a laptop to dock a monitor and some peripherals, too, the Razer Book 13 can handle it without requiring a USB hub or dock.

If you’ve seen or used the Razer Blade Stealth, there aren’t any surprises with the keyboard. I’ve already talked about the RGB backlighting, and the layout itself is nearly perfect. The travel in the keys is a bit short, but I didn’t have any issues with usability after familiarizing myself with the feel of the keypresses.

The same goes with the Windows Precision touchpad, which is large and responsive. Every millimeter of space has been maximized for the benefit of the user.

The speaker grills are located right on the keyboard deck, flanking both sides. Though they lack any bass whatsoever (like nearly all laptop speakers), they have a nice stereo spread thanks to the placement. They work in a jiffy, but aren’t good enough for long music-listening or movie-watching sessions.

Razer has really stepped up its game with this laptop’s screen. Not only is it in the brilliant 16:10 aspect ratio with slimmed-down bezels, the image quality is also fantastic. For a $1,200 laptop, you get an extremely bright 514-nit screen that’s always crystal clear regardless of how bright your environment may be. That extra brightness also brings out the contrast in the colors, which is as high as you’ll find in a laptop at this price.

The color saturation and calibration are nothing special (98% sRGB, 77% AdobeRGB, respectively), but they match well with the non-4K panels you get in other laptops.

It’s not a laptop designed first and foremost for professional color grading, but that doesn’t mean you can’t do some creative work on the side. That holds true in performance as well.

The Razer Book 13 has a $1,200 base configuration that comes with a Core i5-1135G7, 8GB of RAM, and 256GB of SSD storage, which is exclusively sold through Razer’s online storefront.

My configuration was the spruced-up $1,600 model, which pushed up to a Core i7-1185G7, 16GB of RAM, and 256GB of storage. You can upgrade to 512GB of storage, but most premium laptops offer configurations with at least 1TB. Unfortunately, you’ll have to pay $2,000 to get a model with more storage. Razer really charges up the wazoo for these more expensive configurations.

If you do opt for the Core i7 model, though, you’ll be impressed by the performance. In Cinebench R23, it demonstrated the best single-core performance we’ve tested in a 13-inch laptop (1,508). And yes, that even includes the M1 MacBook Pro (1,487).

What does that mean for you? Well, based on its excellent scores in PCMark 10, the Razer Book 13 should be a fantastic productivity and Office tool. Like many of Razer’s laptops, this one competes with larger 14-inch and 15-inch options such as the Lenovo Yoga 9i 14 or Acer Swift 3X.

When I say this really isn’t a gaming laptop, I mean it.

The Razer Book 13 is a bit less impressive in creative application performance. It didn’t score quite as well in Cinebench R23’s multi-core test (4,519), nor in PCMark 10’s Creation test. I confirmed this in a real-life test in Handbrake, where I encoded a 4K movie trailer to H.265. The Razer Book completed the task in three-and-a-half minutes, which isn’t as fast as some of its competitors. It’s only 3% behind the XPS 13, but it’s 14% behind the ThinkPad X1 Nano and 26% behind the MacBook Pro.

Doing some photo editing, graphic design, or even light video editing shouldn’t be a problem, just don’t expect the Razer Book 13 to encode 4K video as fast as larger laptops.

Intel’s Iris Xe integrated graphics are also included, which can power some light gaming in 1080p, so long as you turn down graphics settings a bit. I tested Civilization VI at 1080p with settings at Medium, and the Razer Book 13 averaged just 37 frames per second. When I say this really isn’t a gaming laptop, I mean it.

If you want more gaming prowess, you’ll want to upgrade to the Razer Blade Stealth, which packs a discrete GTX 1650 into a similar-sized laptop.

The Razer Book 13 really only has one major fault:. Battery life. It’s one step behind battery life leaders like the Asus ZenBook 14 UX425 or Lenovo Yoga 9i 41. It’s hardly worth mentioning the M1 MacBooks, which blow all these laptops out of the water in terms of battery life.

In light web browsing, the Razer Book 13 only lasted for just over eight hours. Again, not an awful result, but it’s far from being a leader, as it is in many other aspects.

Its score in video playback was also a little concerning, lasting just over 10 and a half hours. Battery life was always an issue with the Razer Blade Stealth, and while the Book 13 fares better, it’s still not quite where I’d like to see it.

You’ll make it through the majority of a workday without needing to plug it in. But with the M1 MacBooks pushing the envelope in battery life, there’s more need than ever for Windows laptops to start fighting back.

The Razer Book 13 does almost everything right. Among top-tier laptops like the Dell XPS 13 and HP Spectre x360 13, the Razer Book 13 slots in well based on quality and performance. It’s limited (and expensive) configurations are really it’s only weakness.

The clearest competitor is the Dell XPS 13. The XPS 13 is $400 cheaper, despite offering a more colorful screen. The HP Spectre x360 13 comes in at even cheaper price.

The Razer Book 13 should last you at least four or five years. It’s loaded with the latest components, and has all the right port technology. Razer’s laptops comes with a standard one-year warranty.

Yes. The Dell XPS 13 and MacBook Pro 13-inch are slightly stronger options, but the Razer’s unique aesthetic and well-rounded port selection are enough to make it stand out.

Topics
Careful — Microsoft DirectStorage could kill your frame rate
Apple Mac Mini M2 vs. M1: don’t make a buying mistake
The best Chromebooks for 2023
The best touchscreen monitors in 2023
Why you need to order LG’s 240Hz OLED gaming monitor
2 ways the new MacBook Pro may be worse than the 2021 model
Hackers dug deep in the massive LastPass security breach
HP Dragonfly Pro vs. Apple MacBook Pro 14: a solid alternative?
I can’t believe I’m recommending Forspoken on PS5 over PC
The best ergonomic keyboards for 2023
The best keyboard wrist rest in 2023
A NordVPN 2-year plan is 63% off for the rest of today
This HP laptop is typically $1,800, but right now it’s just $629