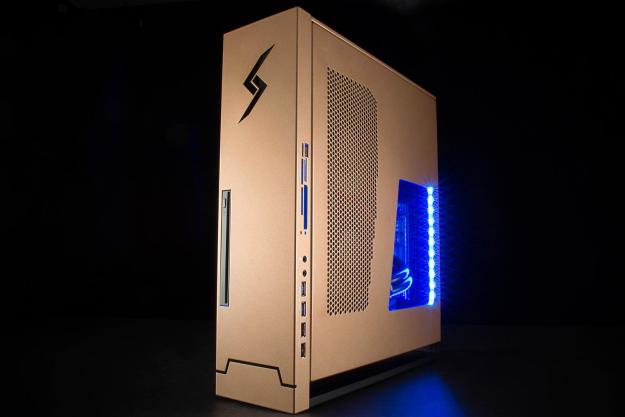 “The Bolt II's looks are unremarkable, but its strong performance and surprising upgrade-ability give it an edge over the competition.”

Digital Storm entered the arena of super-cool, super-small, super-charged PCs early with its original Bolt, a system that (at the time) only had to compete with the Alienware X51 and the Falcon Northwest Tiki for title of “world’s smallest gaming PC.” In fact, the original debuted too early, as it didn’t match the quality and value of its competition.

Rather than give up, however, Digital Storm has decided to take another shot at it with the Bolt II, a system that’s similar to and radically different from its predecessor all at once.

The new version retains the slim, boxy styling of its forefather, and could easily be mistaken for it from ten feet away. However, a closer look reveals subtle changes that have been made to the system’s ports, panels, and cooling.

The new Bolt II is also more powerful than its pappy, thanks to its overclocked Intel Core i7-4970K processor, and Nvidia GTX Titan Z graphics card. These top-tier components are joined by a 500GB Samsung 840 EVO solid state drive, and 16GB of RAM.

We have little doubt that such hardware can handle games with resolution and detail settings cranked up, but they also jack the price up to $6,438, which puts the Bolt II in the realm of tough competitors like the Maingear Torq. Let’s see if this sequel can electrify us in ways the original could not.

Copper on the case

Our review unit arrived with a coat of earthy copper paint that generated diverse opinions. To some, it was a refreshing change from the colorful “hey, look at me!” design of many modern gaming rigs. To others it looked boring and forgettable.

Bright and bold, the lighting system can be customized to emit a broad range of colors.

Whatever your opinion, copper (officially called “Copperhead”) isn’t your only choice. The system can also be coated in black, white, silver, red, or blue. Bronze costs $99 extra, so you’ll save money if you select something different. You’ll also be saving money over what the competition offers too. The Maingear and Origin demand twice as much for custom paint jobs.

Our review unit’s subdued paint clashed a bit with the system’s internal LED lights, which are visible through the case’s window and front power indicator. Bright and bold, the lighting system can be customized to emit a broad range of colors. It can also be set to the match the system’s thermals; at idle, the lights cast a cool blue hue. Under load, they slowly morph to bright green (red would be the next logical step, but we never saw it). You can also turn the lights off completely if you choose.

While the LEDs are impressive, the Bolt II’s enclosure isn’t. The case suffers from a roughly made design that seems undeserving of a price tag that borders on $6,500. Panel gaps are less common than they were on the original Bolt, and the chassis feels more solid. However, there’s still a plethora of obvious chasms and holes. We also don’t like that the optical drive isn’t painted to match the enclosure or hidden behind a shroud.

What’s lost in looks is made up for in features, as the Bolt II expands on the original’s connectivity and offers plenty of ports for its size. Up front, there are four USB ports, two of which are 3.0, along with a card reader and headphone/mic jacks. The back panel adds four more USB 3.0 ports, four USB 2.0 ports, Ethernet, additional audio jacks, and a PS/2 port. Our review unit also boasts built-in 802.11ac Wi-Fi courtesy of its high-end ASUS Z97I-PLUS motherboard.

While the exterior of the Bolt II looks a bit different from the original, the chassis itself is very similar. Port locations remain the same, and the external dimensions are unchanged. Yet, Digital Storm has made some subtle improvements to the system that makes it far easier to upgrade than before.

The Digital Storm Bolt II is a tiny rig that should please even the most hardcore PC enthusiast.

The case now opens by removing four thumb screws at the back of the system, two at the top, and two at the bottom. Unlike the original, the sequel has separate left and right case panels instead of a single, massive panel covering the left, right, and top. This more conventional arrangement is easier to understand and much easier to work with.

Once inside, you’ll find a surprisingly roomy interior. Any enthusiast familiar with a standard tower desktop can service the processor, RAM, and video card. However, tight power routing can make removing these components more difficult than usual. Digital Storm has also wisely bundled the hard drive and optical drive in self-contained bays attached by just a few screws.

In fact, every major component can be replaced without removing any other part, which is a noteworthy feat given the Bolt II’s miniscule size. Upgrading the Digital Storm Bolt II is surprisingly easy, though a tad more difficult than it is with a mid-tower.

The Bolt II comes in behind the Torq, which we benchmarked with an overclocked Core i7-4790K running at 4.7GHz, but far ahead of the CyberPower Zeus Mini, which we reviewed with a Core i7-4770K at its standard clock. While it’s second best in this comparison, we must note that the Torq we reviewed cost over $8,200. The less expensive Digital Storm system obviously provides better value.

7-Zip, a heavily multi-threaded compression benchmark, heaped even greater praise on the Bolt II with its score of 26,543. That’s slightly ahead of the Torq’s 25,998, and way beyond the Zeus Mini’s 22,371. These scores make one thing clear; this tiny tower is no pushover.

Next up is PCMark 8’s storage test, which judges the performance of the primary drive. Here the Bolt II produced a score of 4,987. This beats the Torq’s score of 4,942, but comes in slightly behind the Zeus Mini’s score of 4,991. Subtle differences aside, all of these systems provide extremely quick access times, and read/write performance that can transfer even the largest files in minutes.

We rounded out our synthetic tests with 3DMark, the world standard in cross-platform GPU benchmarks. Commence the clash of the Titans!

The Bolt II’s score of 13,697 in 3DMark Fire Strike, the benchmark’s most demanding test, is just a smidge lower than the Torq’s result of 14,066. Both of these systems offer similar hardware, and have a Titan Z video card. As was the case with SiSoft, this is technically a loss for Digital Storm, but it’s mitigated by the Maingear Torq’s $8,200 price tag. The Bolt II is more reasonably positioned, and only a smidge behind the Torq.

To see how this rig stands up in real-world gaming situations, we loaded our usual test suite of Total War: Rome II, Battlefield 4, and League of Legends. All three were tested at 1080p resolution, and frame rates were recorded with FRAPS.

This demanding strategy game was easily conquered by the Bolt II, which hit an average of 78 frames per second at Medium detail. The maximum framerate was 96, and the minimum was 61.

Turning detail up to Extreme reduced the average to a still-playable 61 FPS. with a maximum of 71, and a minimum of 48. This trails the Maingear Torq, which averaged 67 FPS, but speeds past the CyberPower Zeus Mini, which averaged 58 FPS.

DICE’s latest entry in the Battlefield franchise hit an average of 199 FPS at Medium detail, with a maximum of 200, and a minimum of 178. The game’s engine limits itself to no more than 200 FPS, so this is effectively the highest score achievable.

Turning detail up to Ultra produced a still-smooth 132 FPS, with a maximum of 163, and a minimum of 99. That’s less than the Torq, which averaged 146 FPS, but far better than the CyberPower Zeus Mini, which averaged 58 FPS.

These results barely beat the Maingear Torq, which hit 187 FPS at Very High detail, and clobber the CyberPower Zeus Mini, which hit just 140 FPS at Very High. Of course, these differences are ultimately trivial in real-world gameplay, as all three systems run League of Legends super smoothly with power to spare.

At idle, the Bolt II consistently produces around 41 to 42 decibels of fan noise. This is loud enough to be noticeable, but not so loud as to be annoying. Surprisingly, the Maingear Torq emits only a decibel less at idle despite full liquid cooling of both the processor and the video card, and we actually found Digital Storm’s system more tolerable, because its fans create sound at a lower pitch. The Bolt II’s idle performance also beats the Origin Genesis and CyberPower Zeus Mini by several decibels.

The story changes whenever load is placed on the video card, however. Within a few minutes, the Digital Storm rig hits a peak of 51dB, which is a full six decibels more than the Torq, and on par with the CyberPower Zeus Mini. Gamers who don’t use headphones may find the system fan to be a distraction.

Digital Storm’s control panel, which handles both the LED lights and the system’s cooling, offers “quiet mode” and “extreme mode” options. However, we did not see any change in cooling or sound performance with quiet mode on. Extreme mode, meanwhile, simply turns the fans up to maximum no matter the system’s workload.

All versions of the Bolt II (even the $1,700 base model) come with a warranty that covers labor costs for three years, and parts replacement for one year. The warranty also covers lifetime free labor on upgrades, and lifetime phone service as well.

On the whole, what Digital Storm offers compares well to the competition. Maingear’s base warranty offers lifetime labor and support with parts replacement for two years, but its shipping terms are less generous.

Origin PC, meanwhile, offers one year of parts replacement with lifetime labor and phone service, but the customer must pay for shipping after the first 45 days (free shipping warranties are sold as an upgrade).

Our review unit clearly beats the value of the Maingear Torq, which is just slightly quicker and almost $2,000 more expensive. The Maingear also provides a full loop liquid cooling system, but that fact is somewhat irrelevant; it’s not optional, and it doesn’t endow the Torq with enough added performance to justify the premium.

That leaves the Bolt II with only one challenger; the Origin Chronos, which is available in a super-slim Silverstone RVZ01 case. The Origin rig barely peaks at $6,000 dollars, which is great value, but what we know of the RVZ01 enclosure leads us to believe that the Chronos will not be as easy to upgrade as the Bolt II. We’ll leave final judgment on that, however, until we get a chance to review it.