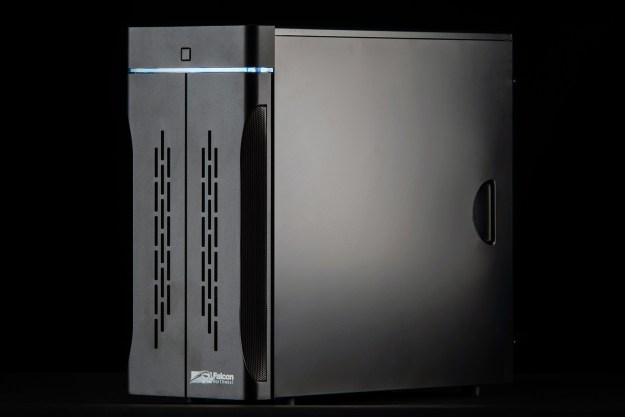 “Falcon Northwest’s Talon is a great pick among compact enthusiast PCs, but its outdated case and irritating fan keep it from earning top honors.”

We pitted this system against four other Skylake desktops. For the full scoop, including processor and gaming benchmarks, check out our comparison.

While hardware has become more efficient in recent years, enabling more compact builds, most enthusiast PCs still suffer a case of gigantism. That’s not true of the Talon, a mid-tower actually worthy of the designation. It’s about two-thirds the size of many competitors and can easily fit under any desk.

Going small doesn’t seem to impact the Talon’s performance at all. In our tests it easily kept up with larger competitors because it offered the exact same hardware. While there’s a bit less interior space for future upgrades, the Talon still offers more room than most enthusiasts will ever need.

Yet the size of Falcon’s system does seem to catch up to it in one area – fan noise. We noticed the system put out more than any of the competitors we tested, sometimes by a margin of up to five decibels. That’s an extremely noticeable difference.

The Talon isn’t inexpensive, either. It tends to be a bit more than comparably equipped systems. While Falcon’s build quality and attention to detail is excellent, this enclosure has been in use for several years, and is starting to show its age. Still, the Talon is a good pick for anyone who wants incredible performance in a small package.

AMD and Intel duke it out in the GPD Win Max 2, and there’s a clear winner
When should you upgrade your CPU?
Intel’s flagship Arc GPUs might be right around the corner
Intel serves up new benchmarks for Arc Alchemist, but can you trust them?
Nvidia addresses the rumors about the RTX 40 GPUs’ power consumption
Intel says Moore’s Law is alive and well. Nvidia says it’s dead. Which is right?
Best Microsoft Surface Pro deals for October 2022
Logitech’s new Mac accessories are customizable, functional, and undeniably pretty
Adobe adds AI magic to Photoshop and Premiere Elements
DLSS 3 could boost your gaming performance by up to 5x
Exciting Meta Quest 3 details leak in full CAD renders
Dell is having a surprise sale on its best business laptops
Best laptop deals: Get a portable workhorse from $119 today