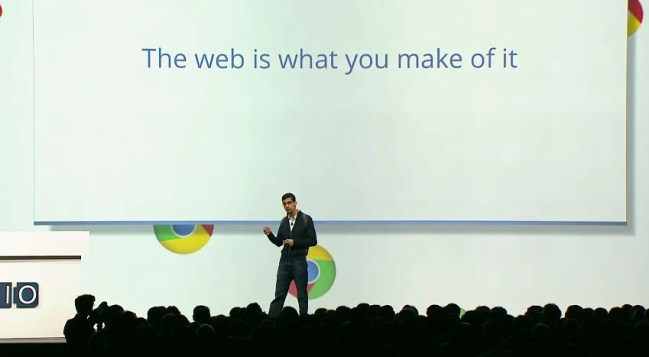 Google kicked off day two of Google I/O 2011 by spotlighting some of the new things it’s doing with Chrome OS. Sundar Pichai, head of Chrome, keynoted the event, and unveiled the first two Chromebooks, which is Google’s new word to describe laptops that are running Chrome OS. Google is giving out free Chromebooks to all I/O attendees, but for those of you who couldn’t make the flight, we’ve detailed the new features shown and the first two Chromebooks, developed by Acer and Samsung.

Google kicked off its Chrome OS discussion by highlighting the 1 million people who applied to be a part of the Cr-48 Pilot Program. It has helped the company address some of the features with the OS, Pichai explained. The company demonstrated how users can now view file directories in Chrome OS, browse photos, and play media right from the browser with the notebook’s limited local storage. Opening a music file, for instance, opens up a built-in Chrome media player in the lower right part of the screen. This enables users to watch or listen to content while still browsing the Web or using Web Apps. Video can, of course, be maximized as well.

In addition, app makers will be able to tie their apps to specific file types, allowing users who install a Web app like Box.net to instantly use that app while browsing files. Apps will be able to add functionality buttons to different areas of Chrome OS contextually when a user chooses to install them. Any Web app can handle your local files, if you install it. Google’s Cloud-based music service, Picasa, and movie rental service will work with Chrome out of the box.

Offline support was also addressed. Gmail, Google Docs, and Google Calendar will have offline support out of the box and Google is encouraging all Web app developers to begin including support for their apps. The Huffington Post, NY Times, Sports Illustrated, Springpad, Marvel Comics, Salon.com, USA Today, and others have already integrated this functionality.

Chromebooks are hitting the market sooner than you think. Google has partnered with Best Buy and Amazon to make its first two Chromebooks available for online purchase on June 15 in the United States, United Kingdom, France, Spain, Germany, Italy, and the Netherlands. We’ll detail the individual specs on each of the two units below, but all Chromebooks should share these traits: they boot up in about 8 seconds, are always connected, have long battery life, have built-in security (no virus protection needed), and they “get better over time.” Pichai explained that while traditional PCs degrade in time and are never quite as good as the day you bought them, he believes that thanks to the seamless background updating of Chrome OS, he and his team can actually make these laptops get faster over time. A lofty goal, as even Android phones follow the normal wear and tear of the PC world.

As seen in the image above, Samsung’s first Chromebook has an 8-second boot, 8-hour battery life, is always connected (if you choose to pay for 3G), and has a 12.1-inch display. We don’t know much else, except that it will be available in two colors and has a slightly condensed keyboard.

The Acer Chromebook is priced $120 cheaper than Samsung’s. It has a weaker 6.5 hours of battery life and a smaller screen at 11.6 inches, but its keyboard is full sized and, like all Chromebooks, it runs on a solid state hard drive, enabling an 8-second boot time.

Businesses and schools get Chromebooks for a monthly fee

June 15 will also mark the beginning of Google’s Chromebooks for Business and Schools, which is a program that turns a Chromebook from a purchase into a service. Instead of buying Chromebooks, businesses can now sign up to get Chromebooks for their employees for a monthly fee of $28 per user. For that price, Google provides a complimentary Chromebook and support. After a computer has reached the end of its lifecycle, Google will replace it as part of the package. Schools get this same deal, but for only $20 per student per month.

Pichai explained that Chromebooks could be used by 75 percent of businesses and save companies thousands of dollars. An average company, he said, spends more than $3,000 per computer. By comparison, Chromebooks are a great deal.

Additionally, Pichai said that Chromebooks will be easy to jailbreak for those who want to experiment with new ideas. For businesses, desktop virtualization software by companies like Citrix and VMware will also be available.

We’re still missing a lot of details about these devices and exactly how Google’s service and replacement program actually works. Do businesses have to sign up for at least two years of service or simply return the Chromebooks if they unsubscribe? And then there’s the question of connectivity. Though these laptops are “always connected,” they really aren’t unless you pay for a Wi-Fi or 3G Internet connection. We imagine that a 3G/4G Internet connection would be ideal for a laptop designed to always be on the Web, but if a business wants to purchase that as well, it may double the monthly price of the laptops, per user. These laptops both appear to be in the “netbook” size range as well. Does Google intend to bring out larger Chromebooks for users who want some screen space? We can’t imagine 75 percent of businesses equipping all of their employees with 11.6-inch laptops.

Still, we are excited about the idea of a new OS shaking up the PC world. Hopefully Google will have some answers soon.