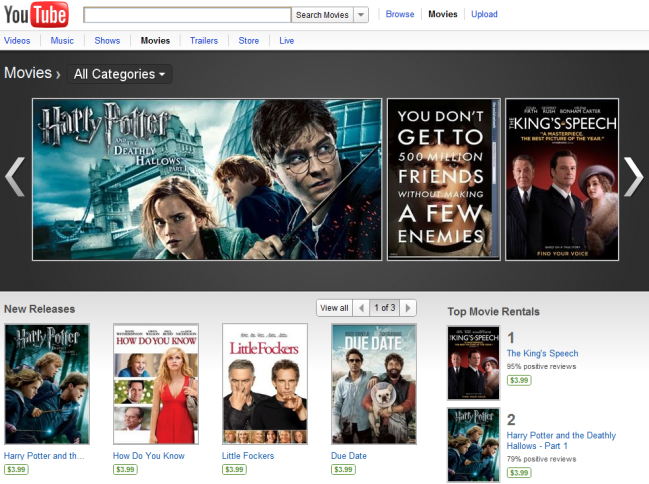 It’s not a guarded secret that Google has been planning to turn YouTube into a viable online video streaming platform, evolving it past its original status as a digital haven for home movies. Today YouTube announced it is partnering with Sony, NBC Universal, and Warner Bros. to host “thousands of full-length feature films.” Users can now rent movies from the 3,000 available titles with nothing more than a YouTube account and $3 to $4. Customers will get 30 days to watch the movies and 24 hours after beginning them.

YouTube says it’s in the process of rolling out additional titles over the next few weeks at youtube.com/movies, and there will be a plethora of extras, like “free behind-the-scenes videos, cast interviews, parodies, clips, and remixes” to boot. Movies can be rented from any computer or Google TV, and will include Rotten Tomatoes reviews for your pre-selection purposes.

A few things make this an incredibly attractive offer, the first being the suddenly expanded content. In addition to the three major studios announced today, YouTube also partners with Lionsgate Films, Starz, The Weinstein Company, Magnolia Pictures, and more. There are now 6,000 titles available, and that number is only going to grow. YouTube also does not require a subscription, which is a bonus for many consumers who prefer to pay for digital rentals on a one-time basis.

Google has been grooming YouTube to become a competitive and professional digital media service and has generally been smoothly transitioning from amateur videos. YouTube will also feature celebrity-branded content as well as categorized channels. If the movie rental service is as lucrative as it sounds like it could be, it would also hugely benefit Google TV, which has had issues finding programming and which Google is trying to update and upgrade in the near future.

See the entire press release from the official YouTube blog below:

Here at YouTube, we can’t get enough video. When it comes to movies, we’re just as excited: YouTube hosts a great selection of movie trailers and showcases a variety of independent films in our Screening Room; last year we announced the ability to rent movies from Sundance Film Festival; and this year at Sundance we premiered Life in a Day, a documentary film about a single day on earth filmed by thousands of YouTube users, produced by Ridley Scott and directed by Kevin Macdonald.

Today, we’re announcing another step in our goal to bring more of the video you love to YouTube: the addition of thousands of full-length feature films from major Hollywood studios available to rent in the US at youtube.com/movies. In addition to the hundreds of free movies available on the site since 2009, you will be able to find and rent some of your favorite films. From memorable hits and cult classics like Caddyshack, Goodfellas, Scarface, and Taxi Driver to blockbuster new releases like Inception, The King’s Speech, Little Fockers, The Green Hornet and Despicable Me. Movies are available to rent at industry standard pricing, and can be watched with your YouTube account on any computer. The new titles will begin appearing later today and over the coming weeks to www.youtube.com/movies, so keep checking back.

But your movie experience won’t begin and end with a single film. With 35 hours of video uploaded every minute to YouTube, there’s a sea of content that can add to your movie experience. Many movie pages feature YouTube Movie Extras — free behind-the-scenes videos, cast interviews, parodies, clips and remixes from YouTube’s unique community of content creators. Movie pages also showcase reviews from Rotten Tomatoes, so you’ll see feedback from critics before you decide what movie to get into. Over time we’ll also be adding additional videos and features to YouTube Movie Extras so that you can get even more into movies on YouTube.

Q. What are some of the new studios you’re partnering with?
A. NBC Universal, Sony Pictures and Warner Brothers.

Q. How many films have you added and how many total movies are now available on YouTube?
A. We have added a total of approximately 3,000 new titles including catalog and new releases from Sony Pictures, Warner Bros, NBCUniversal, Lionsgate Films and many great independent studios. This brings the total number of movie titles available to rent on YouTube to over 6,000.

Q. Where and when will the additional movie titles begin appearing on YouTube?
A. Movies for rent will be available at www.youtube.com/movies and new titles will begin appearing to users today and be added throughout the week.

Q. Where are the new movies located and when will they be available on the site?
A. The new movies are located at www.youtube.com/movies and will start appearing at that destination throughout the day.

Q. How many total studios are now represented at YouTube.com/movies and what are they?
A. Studio partners include Universal Pictures, Sony Pictures, Warner Brothers, Lionsgate Films, Starz,The Weinstein Company, and Magnolia Pictures, among others.

Q. How much will the movies for rent cost?
A. Movies are set at industry standard pricing (i.e. most new releases start at $3.99 and library start at $2.99).

Q. How long will a consumer have a movie once he or she has purchased it?
A. For most movies, viewers will have 30 days to begin watching their rental. Once they start watching the movie they will typically have 24 hours to finish.

Q. What transaction service are you using?
A. The service accepts all major credit cards.

Q. Is this a subscription service?
A. No, this is a transaction offering.

Q. Are the movies downloaded, or streamed?
A. Streamed.

Q. Is this global?
A. No. This service is available to US YouTube users only.

Q. Can rented movies be shared or embedded into other sites including blogs, Facebook and Twitter?
A. Users can embed movies on other sites. If a user who has not rented the movie views the embedded video, the embedded player will show the movie’s trailer along with an overlay that users can click on to rent the full movie.

Q. Is the content in HD?
A. YouTube supports video in up to 4k resolution, however, it is up to our partners to specify what video quality they provide. Most movies for rent will be available in standard definition.

Q. What is unique about the YouTube Movie experience?
A. Movies on YouTube are about providing a complete movie experience. With YouTube Movie Extras movie fans can get more into their favorite films through cast interviews, clips, alternate movie endings and other highly produced content from talented YouTube partners. YouTube reaches one of the largest and most engaged online audiences in the world, with hundreds of millions of views a day in the US alone.

Google Docs will auto-generate TL;DR summaries for you