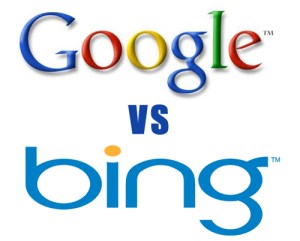 The war of words between Google and Bing hit a fevered pitch Wednesday, with Google search engineer Amit Singhal blasting Microsoft in a post on the official Google Blog for allegedly stealing search results, calling Bing’s results a “cheap imitation.”

“However you define copying,” writes Singhal, “the bottom line is, these Bing results came directly from Google.”

The public battle between the online search competitors began Tuesday after Danny Sullivan at Search Engine Land reported that Google had staged an undercover “sting operation” to trick Bing into copying bogus search results after engineers noticed Bing results for an obscure eye surgery, called tarsorrhaphy, looking suspiciously similar to their own.

In Google’s newest presentation of evidence, Singhal further explains how they came to discover that Bing was copying Google spelling corrections and search results:

We noticed that URLs from Google search results would later appear in Bing with increasing frequency for all kinds of queries: popular queries, rare or unusual queries and misspelled queries. Even search results that we would consider mistakes of our algorithms started showing up on Bing.

Microsoft has denied claims that it copied Google’s data about what people search and click to fine-tune Bing’s search results, telling ZDNet unequivocally that Bing does “not copy Google’s results.”

Bing VP Harry Shum continued the Microsoft line on the official Bing blog, saying: “To be clear, we learn from all of our customers. What we saw in today’s story was a spy-novelesque stunt to generate extreme outliers in tail query ranking. It was a creative tactic by a competitor, and we’ll take it as a back-handed compliment. But it doesn’t accurately portray how we use opt-in customer data as one of many inputs to help improve our user experience.”

This exchange was followed by a heated (and highly entertaining) back-and-forth on Twitter between Googlers and Microsoft’s communications chief Frank Shaw, who claimed that Google was the “pot calling [the] kettle black” because “Google collects customer data from Chrome and Android,” among other refutations.

The Google vs. Bing confrontation has sparked a wave of criticism — aimed at both sides — from the tech community. But to Google’s critics, Singhal says that the company’s goal is simple: “We would like for this practice to stop.”