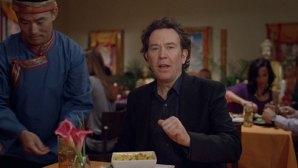 In a recent company profile in Bloomberg BusinessWeek, Groupon’s 30-year-old CEO Andrew Mason placed the blame for the commercials — one of which seemed to many to equate the plight of Tibet with saving money on dinner — pointedly on the shoulders of the advertising firm that created the spot, CP&B.

According to Mason, his company put too much faith in the agency’s ability “to be edgy, informative and entertaining, and we turned off the part of our brain where we should have made our own decisions. We learned that you can’t rely on anyone else to control and maintain your own brand.”

While the statement doesn’t contradict Groupon’s earlier explanation, it seems to pass the buck for the highly public debacle from Groupon to CP&B.

Immediately following the Super Bowl ad uproar, Marshall wrote on the Groupon blog that the ads were not meant to offend, but instead to poke fun at the other Super Bowl ads “that glorify antisocial behavior – like the scores of Super Bowl ads that are built around the crass objectification of women.” In short, the Group on ads were just a big misunderstanding — one that has led Groupon to cut ties with CP&B as its advertising firm.

“The situation illustrates a classic tension in marketer-agency relationships,” says Ad Age‘s Rupal Parekh. “Clients say they want to take risks, but later realize they weren’t ready or can’t stomach the criticism associated with them.”

As Parekh points out, CP&B is known for taking risks, having produced such recent notable spots as Burger King’s “Whopper Virgins” campaign, which had people around the world who’d never had a Whopper try one; and Domino’s controversial ad in which it admitted it made crappy pizza. (Burger King has also since stopped doing business with CP&B, so perhaps that one didn’t go over so well either.)

Groupon is in a prime position to do exactly as it pleases. The company is planning to launch a new service that connects customers with restaurants and other venues that are offering deals in their close proximity. This has helped the company earned a reported valuation of $25 billion, despite whatever bad press it may have received for a couple of tacky ads.

Topics
Google Maps' automatic review translation makes finding a restaurant even easier
Clogged arteries and compromised credit cards could come from eating at Arby's
Amazon's Alexa can now re-order your next meal from Amazon Restaurants
20 major hotels were hacked by malware, including some Marriott locations
GPU prices and availability (February 2023): how much are GPUs today?
The best PC power supply for 2023
ChatGPT has a new way to detect its own plagiarism
Samsung Galaxy Book 3 Ultra vs. MacBook Pro 16-inch
The Galaxy Book 3 Ultra is Samsung’s most powerful laptop ever
Nvidia may have another monster GPU in the works, and the price could be outrageous
AMD’s Ryzen 9 7950X3D pricing keeps the pressure on Intel
What is ChatGPT Plus? Everything we know about the premium tier
ChatGPT Plus to bring priority access during peak times — at a hefty price