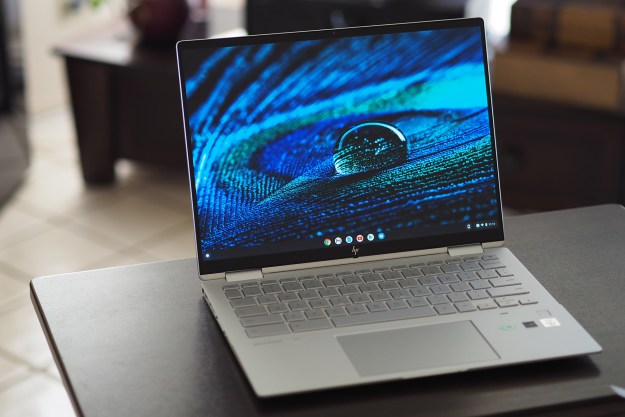 “The HP Elite C1030 Chromebook isn't cheap, but it has business acumen in spades.”

Most people won’t spend more than $1,000 for a Chromebook. There are far too many options for much less money that can run Chrome OS like a dream. But the growing segment of business Chromebooks has shown there’s an interest in premium Chromebooks that have all the manageability and security tools an IT department will need.

The price also includes a perpetual Chrome OS Enterprise license that’s normally $50 a year. That’s a load of cash for a Chromebook — does the Elite C1030 deserve its high price?

To begin with, this is a good-looking laptop. It follows HP’s Elite aesthetic, which is modern yet conservative. Yes, the chassis is all silver, and that sometimes comes across as generic. But there’s something about the way HP utilized contrast, with matte silver on the top and bottom and shiny silver on the sides, that makes it stand out.

The lid is rounded at the edges, and there’s just enough of an angle on the chassis bottom — it just works. The Lenovo ThinkPad C13 Yoga Chromebook is another enterprise machine that sports the iconic ThinkPad look and feel — all black with a soft coating — while the consumer-oriented Acer Chromebook Spin 713 has a more angled look and a darker gray that’s also appealing. All are attractive choices, but the HP Elite C1030 ranks among my favorites.

The HP Elite C1030 Chromebook benefits from smaller bezels than both of those laptops, coming in at a 90% screen-to-body ratio that looks far more contemporary. The bottom chin is even relatively small for a 2-in-1 that needs a complex hinge. The HP and Acer both employ 3:2 aspect ratio displays and so are taller than the Lenovo, which has the old-school 16:9 aspect ratio.

Even so, thanks to its smaller bezels, the Elite C1030 Chromebook is smaller in width and height than the ThinkPad C13 Yoga Chromebook and the Chromebook Spin 713 while still offering the larger palm rest and touchpad common to laptops with taller displays. The HP comes in at 0.7 inches thick and 2.87 pounds, compared with the Lenovo at 0.7 inches and 3.3 pounds and the Acer at 0.66 inches and 3.02 pounds.

The Elite C1030 Chromebook is solid as a rock.

In terms of build quality, the Elite C1030 Chromebook is solid as a rock, at least as much as the ThinkPad C13 Yoga Chromebook, and it’s more robust than the Chromebook Spin 713. The enterprise systems were both subjected to military testing for durability, and it shows — they’re in a different class, as good as any premium laptop on the market today. The Elite C1030 Chromebook’s hinge does require two hands to open, but it keeps the display in place through all its four modes — clamshell, tent, presentation, and media.

HP also builds in a few security features that are unusual on Chromebooks today. First is the fingerprint scanner that offers passwordless login and works as well as any Windows 10 Hello fingerprint scanner. Second is the switch to turn the webcam on and off electronically, something HP borrowed from earlier Spectre machines (which have since switched to a physical webcam blocker).

Finally, HP offers the world’s first (optional) privacy screen that blocks viewing from any angle but straight on. My review unit didn’t equip that display, but I’ve seen it on Windows 10 machines, and it’s impressive.

My review unit was built around a 1oth-gen Intel Core i7-10610U vPro CPU, making it a powerfully equipped Chrome OS laptop. That operating system is much more lightweight than Windows 10 or Mac, and a Core i7 of any stripe will perform well. Add in the 16GB of RAM and fast 256GB PCIe SSD, and you have a recipe for a Chromebook that won’t slow you down.

We don’t have many objective benchmarks that we can run on Chromebooks, so much of my analysis is subjective. The Elite C1030 Chromebook did score 1,102 in the Geekbench single-core test and 3,216 in the multicore test, which is well behind Windows 10 laptops but ahead of the Acer Chromebook Spin 713 with its Core i5-10210U CPU (966 and 3,040, respectively) and the Lenovo ThinkPad C13 Yoga Chromebook running AMD’s Chrome OS-optimized Ryzen 5 3500C (907 and 2,739).

In the Speedometer 2.0 benchmark that measures web application responsiveness, the HP hit 114, as compared with the Lenovo at 86 and the Acer at 101.

Subjectively, then, I’ll just say that you’ll have to work really hard to slow down the Elite C1030 Chromebook. I opened scads of Chrome tabs and had multiple Android apps running in the background, and I couldn’t get the thing to falter. I doubt that you’ll experience any performance hiccups no matter what you throw at the machine.

I could even game a bit. The 10th-gen CPU is limited to Intel’s older UHD graphics, but it still handled games like Asphalt 9: Legacy without any lag or hesitation. You should be able to do some light gaming on the Elite C1030 Chromebook to go with all that work you’ll be doing.

The Elite C1030 Chromebook enjoys a 13.5-inch WUXGA+ (1,920 x 1,280) display in the productivity-friendly 3:2 aspect ratio. I can’t subject it to my colorimeter’s testing; that’s just not supported in Chrome OS. However, I found the display to be plenty bright (HP promises 400 nits of brightness) in all the lighting conditions I tested except outside in the bright sunlight — which is to be expected. Colors popped without seeming oversaturated, but without my colorimeter, I can’t attest to the accuracy.

Looking at images side by side with the Dell XPS 13 — which has good but not great colors — I couldn’t tell any difference. Finally, the contrast seemed sufficient, with black text on white backgrounds showing up nicely and images looking like they possessed sufficient depth.

The Acer Chromebook Spin 713 benefitted from greater sharpness at 2,256 x 1,504 on its 13.5-inch 3:2 display. I would have appreciated that on the HP, but I can’t say I experienced any noticeable graininess on the Elite C1030 Chromebook. I enjoyed the display more than the 16:9 panel on the Lenovo Thinkpad C13 Yoga Chromebook, which seemed cramped to me.

Most users will love this display, especially seeing more vertical information thanks to the taller aspect ratio. Media consumption was just fine, as was productivity work, and I have no real complaints.

HP makes great keyboards, and you’ll find them on its Spectre and Elite lineups. The Elite C1030 Chromebook is no different, with an island keyboard that sports silver caps with legible gray lettering, plenty of spacing, and a very crisp mechanism that doesn’t require a ton of pressure to engage yet provides a satisfying bottoming action that lets you know you’ve struck a key.

It’s as good a keyboard as you’ll find on any Windows 10 laptop. It’s better than the Chromebook average — including the two I’ve highlighted in this review — and rivals the Magic Keyboard on Apple’s latest MacBooks. There are the usual Chrome OS five levels of backlighting brightness that let you fine-tune how much light your keyboard gives off.

The touchpad is larger than usual thanks to the taller display’s extra space, and it works extremely well. It’s smooth and precise and does a great job with the suite of Chrome OS multitouch gestures. The touch display is also responsive, and it supports an optional HP active pen for anyone who wants to ink on their Chromebook.

The Elite C1030 Chromebook has a 50 watt-hour battery to go with its reasonable resolution and fast CPU. I wasn’t exactly sure what kind of battery life to expect.

As it turns out, the HP fell in between the other two Chromebooks I’ve mentioned in this review. It managed 8.5 hours on our web browsing test that loops through a series of popular websites, as compared to the Acer Chromebook Spin 713, which exceeded 11 hours, and the ThinkPad C13 Yoga Chromebook, which made it to 7.25 hours. On our video tests using a Full HD Avengers trailer, the Elite C1030 Chromebook hit 10.5 hours, compared to 10 hours for the Acer and only about 7.5 hours for the Lenovo. Those would be mediocre scores compared to the universe of Windows 10 laptops, but they’re average for the recent Chromebooks we’ve tested.

You’ll probably get a full day’s work from the Elite C1030 Chromebook, but not much more than that.

As mentioned in the introduction, HP included a perpetual license for Google Chrome OS Enterprise, which usually costs $50 a year, with this configuration of the Elite C1030 Chromebook. That means you get the enterprise-oriented controls and plug-ins that enhance security and remote management forever.

Your organization will be able to manage the Google Play Store to regulate which apps are installed, and Google Chrome browser extension support will also come under company control. Other features include single sign-on, support for Microsoft’s Active Directory, and 24/7 enterprise support that goes above and beyond what you usually get from Google.

HP also talks a bit about Parallels Desktop for HP Chrome Enterprise, a virtual machine solution that lets an organization make Windows 10 emulation available to its fleet of Elite C1030 Chromebooks with minimal fuss. The solution is easy to manage and provides enhanced capabilities for HP’s enterprise customers. It’s not included with the laptop, but it’s an interesting option nonetheless.

The HP Elite C1030 Chromebook is aimed at enterprise customers, period. It’s swift and has the best security features you’ll find on a Chromebook as well as the option of a perpetual Chrome OS Enterprise license. These all contribute to a fine corporate laptop. The purchase price is also aimed at enterprises that have a profound need for security and manageability.

You can get just as nice a Chromebook in terms of hardware and performance for half the money. But you won’t get a laptop that will fit seamlessly in a corporation’s fleet of machines.

The Lenovo C13 Yoga Chromebook offers the same Chrome OS Enterprise support as the HP, without the same level of enhanced security. It’s also roughly the same price as a similarly configured AMD Ryzen 7 3700C CPU with 16GB of RAM and a 256GB SSD.

I haven’t mentioned it in this review, but the Dell Latitude 7410 Chromebook is a comparable enterprise machine that’s a few hundred dollars less expensive, coming in at $1,279 on sale for a machine with the same specs as our Elite C1030 Chromebook review unit (except for Dell’s 14-inch display). You’ll get similar build quality and performance, but none of the enhanced security features.

Finally, if you don’t need the Chrome OS Enterprise features, then the Acer Chromebook Spin 713 is a solid choice. It’s also quite fast and well built, and it costs about half as much money for a similar configuration.

The Elite C1030 Chromebook is extremely well built and equipped to power Chrome OS for years to come. You’ll also appreciate the three-year warranty that’s included with our review unit.

If you’re an enterprise customer looking for a secure and manageable Chromebook, then the Elite C1030 Chromebook should be on your shortlist. Otherwise, you’ll want to save your money and go with a consumer Chromebook instead.