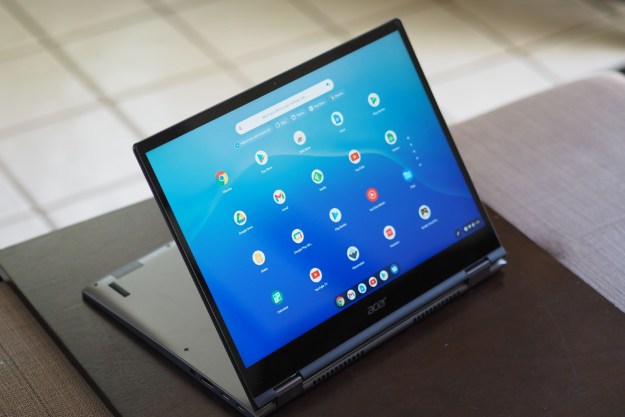 “The Acer Chromebook Spin 713 is one of the fastest and only Evo-certified Chromebooks ever made.”

The stable of high-end Chromebooks keeps growing, and you might not be able to distinguish one from a Windows counterpart at first glance.

Does the Acer Chromebook Spin 713 have what it takes to compete with the latest and greatest Chromebooks?

The Acer Chromebook Spin 713 sports a light gray (or dark silver, depending on the lighting) chassis that’s conservative but attractive. It gets a little extra panache from its chamfered edges, but it’s not designed to stand out. It’s not, for example, a brilliant red like its near competitor, the Samsung Galaxy Chromebook 2, nor does it have the rounded edges of the Google Pixelbook Go (if you’re into that sort of look). Consider the Acer as a contemporary sedan and the Samsung as a sports car and you’ll get the picture. The Asus Chromebook Flip C436 is a lot closer to the Acer Chromebook Spin 713 in its aesthetic, and nobody would fault either machine.

The Acer Chromebook Spin 713 would have a more modern look if its bezels were slimmer. The side bezels are thin enough, but the top bezel is relatively thick and the bottom chin is huge. Coupled with the 3:2 aspect ratio, those bezels not only detract from the look but also make for a laptop that’s a lot deeper than it could be. The Asus Chromebook Flip C436 has smaller bezels with a 14-inch display in the 16:9 aspect ratio — we prefer 3:2, but there’s no doubt that the Asus looks a bit more svelte.

Exert an extra bit of pressure, and the lid will bend.

The Acer Chromebook Spin 713 comes in at 3.02 pounds and 0.67 inches thick, which is quite a bit heavier and thicker than both the Asus Chromebook Flip C436 (2.5 pounds and 0.54 inches) and the Samsung Galaxy Chromebook 2 (2.71 pounds and 0.55 inches thick). Each of these machines is a convertible 2-in-1, so Acer can’t use a more complex hinge to excuse the laptop’s heft.

The Acer Chromebook Spin 713 enjoys an all-aluminum chassis that almost reaches premium laptop levels in terms of its build quality. Exert an extra bit of pressure and the lid will bend a little more than I like, and the keyboard deck has some flex. That’s okay for $700, but it becomes a little less acceptable at around $1,000 for the priciest configuration. The Asus Chromebook Flip C436 feels like a sturdier laptop, and it’s around the same price as the Acer.

Note that Acer has subjected the laptop to the MIL-STD-810g series of durability and reliability tests, and so there’s some reason for confidence beyond my own subjective experience. Also, the Acer Chromebook Spin 713’s display is Corning Gorilla Glass with an antimicrobial coating to reduce the growth of certain microorganisms. The touchpad uses the same glass and provides the same protection.

Acer stocked the Chromebook Spin 713 with a solid selection of ports. On the left-hand side, you’ll find a USB-C 3.2 Gen 1 port with Thunderbolt 4 support (again, a Chromebook first), a full-size HDMI port, and a 3.5mm audio jack. On the right-hand side, there’s USB-A 3.2 port and a microSD card reader. That beats out every other Chromebook so far, none of which can support Thunderbolt 4. The Chromebook Spin 713’s wireless connectivity is fully up to date, with Wi-Fi 6 and Bluetooth 5.0.

Measuring the true performance of a Chromebook relative to other devices is still tricky. However, I can reference Geekbench 5 (the Android app on Chromebooks), where the Acer Chromebook Spin 713 with its quad-core Core i5 scored 1,237 in the single-core test and 5,114 in the multi-core test. That demolishes the Samsung Galaxy Chromebook 2 (in multi-core, anyway) at 1,003 and 2,179 with its dual-core Core i3 and the Asus Chromebook Flip C436, also with the same processor, at 938 and 1,653.

Interestingly, the Acer also beat the Lenovo ThinkPad C13 Yoga Chromebook with AMD’s Chrome OS-specific CPU, the AMD Ryzen 5 3500C. That laptop scored 907 and 2,739. In fact, the Chromebook Spin 713 was competitive with some Windows 10 11th-gen Intel Core machines, which is very unusual for a Chromebook.

But despite the lack of objective measures, I can say that the Acer Chromebook Spin 713 is a speedy Chrome OS laptop that keeps up with any others I’ve reviewed. I used the laptop with a handful of Android apps running and with a ton of Google tabs open, and the laptop didn’t skip a beat. That’s likely in part due to the 8GB of RAM, which is plenty for Chrome OS, along with the speedy SSD.

I also fired up some games, including Asphalt 9: Legends, and the Chromebook Spin 713 ran smoothly with its Intel Iris Xe integrated graphics. It was a bit bulky in tablet mode, but I still managed to run a few races and experienced zero lag or choppiness. This is a huge improvement over the ThinkPad C13 Yoga Chromebook’s AMD Radeon graphics, which turned this game into something approaching a slide show.

As I mentioned earlier, you can upgrade the Chromebook Spin 713 to a Core i7 and 16GB of RAM, but I see no reason to do so. It’s a fast laptop in my configuration, and one of the faster options you’ll find for just $700. I’ll also point out here that the Chromebook Spin 713 is Intel Evo-certified, as I said earlier a first for a Chromebook, and so it promises the same quick response from sleep, long battery life (although check out the battery section for more), better performance, and Thunderbolt 4 support.

One of the more exciting trends in laptops is the move to taller displays. 16:10 and 3:2 aspect ratios show more vertical information, important for web browsing and document creation and viewing. The Chromebook Spin 713 joined that trend early, with its 3:2 display being one of the first on a Chromebook. The 2,256 x 1,504 resolution is also welcome, providing sharp text and images.

I couldn’t subject the display to my colorimeter, so, unfortunately, just as with performance, I don’t have much in the way of objective metrics. In fact, I have none. However, subjectively, I found the display to be bright enough to work comfortably even with plenty of ambient lighting — although working outside under a bright sun wouldn’t be a great experience. I’ve used brighter displays — Dell’s XPS 13 and HP’s Spectre x360 14 OLED are both brighter — but I’m not complaining.

The combination of quality and the 3:2 aspect ratio made this a delightful display.

The contrast was sufficient to make black text pop on white backgrounds. Finally, colors seemed natural and not oversaturated, although I can’t attest to the accuracy. Gamma must have been spot on as well because Netflix videos didn’t seem too bright or too dark.

The combination of quality and the 3:2 aspect ratio made this a delightful display, more than good enough for most Chromebook users. If you need a wide color gamut and precise accuracy, then I can’t attest to how well the display will work for you. I haven’t seen the Samsung Galaxy Chromebook 2 in person, so I can’t say whether its QLED display is better — but I imagine it is given QLED’s ability to show off lovely colors.

Audio quality was a different story. The volume wasn’t terribly loud, and I noticed a hint of distortion at 100%. Highs were a bit clipped, and the midrange was muddy — and of course, as usual with most laptops, the bass was lacking. The sound quality was fine for the occasional YouTube video, but I recommend a pair of headphones or Bluetooth speakers for Netflix binging and music.

The Acer Chromebook Spin 713’s keyboard is a fairly typical island style, with good but not great key spacing. I found the mechanism to be just slightly mushy, with plenty of travel and a soft bottoming action but not as crisp a feel as I’d like. The Asus Chromebook Flip C436 enjoyed a more precise response that I found more comfortable over the long-term, and the Acer’s keyboard didn’t really come close to my favorites, HP’s Spectre keyboards and Apple’s Magic Keyboard on the latest MacBooks.

The touchpad was larger than usual thanks to the extra keyboard deck space made available by the taller display. As mentioned earlier, it has a layer of Corning Gorilla Glass with an antimicrobial coating. I found it quite comfortable for swiping and making precise use of Google’s multitouch gestures. The touch display was also responsive, but while the laptop supports an optional active pen, one doesn’t ship with this configuration.

Acer also didn’t include any biometric login with the Chromebook Spin 713, which is disappointing. A fingerprint reader would have been welcome.

The Asus Chromebook Flip C436 lasted for about 1o.5 hours on our web browsing test and the same time as the Samsung on our video looping test.

Given that the Acer Chromebook Spin 713 uses a faster CPU than either of those competitors and has a tall, high-resolution display, I’m not surprised at these results. Note that these are significantly shorter results than the previous Chromebook Spin 713 generation, which used a low-power 10th-gen Core i5. With these results, you may struggle to get a full day’s work out of the laptop.

The Acer Chromebook Spin 713 fits well into the premium Chromebook space, offering good performance, including Intel Evo certification and Thunderbolt 4 support, and a decent build for a reasonable $700. It’s not the sharpest laptop around, but its conservative good looks obviously appeal to a few buyers.

I would have liked to see an active pen ship with the laptop, but that’s only a dealbreaker for those who rely on digital ink. Otherwise, this is a solid option for anyone looking for a fast convertible 2-in-1 Chromebook.

The Samsung Galaxy Chromebook 2 is a natural competitor to the Acer Chromebook Spin 713, offering the same convertible 2-in-1 flexibility and sharper looks. But it’s not as fast, it doesn’t have the same ability to ramp up performance if you need it, and it’s stuck in the past with its 16:9 aspect ratio display. It’s slightly less expensive, though.

The Asus Chromebook Flip C436 is another strong competitor to the Acer, offering a convertible 2-in-1 with a 14-inch 16:9 display. It, too, is slower than the Acer Chromebook Spin 713, but it’s also slightly less expensive.

If you don’t care about flipping the display around, then Google’s Pixelbook Go is the best option. You’ll get better battery life, improved audio, and a smaller chassis — all for about the same price. There’s a reason we picked the Pixebook Go as the best all-around Chromebook.

The Acer Chromebook Spin 713 isn’t quite as robust in hand as some other Chromebooks we’ve tested, but Acer trusted it enough to subject it to some grueling testing. It’ll last for as long as you need it to and will keep Chrome OS humming along for years to come. The laptop comes with the usual one-year warranty.

Yes. The Acer Chromebook Spin 713 is a solid premium Chromebook offering that has some advantages over its competition, speedy performance not being the least among them.