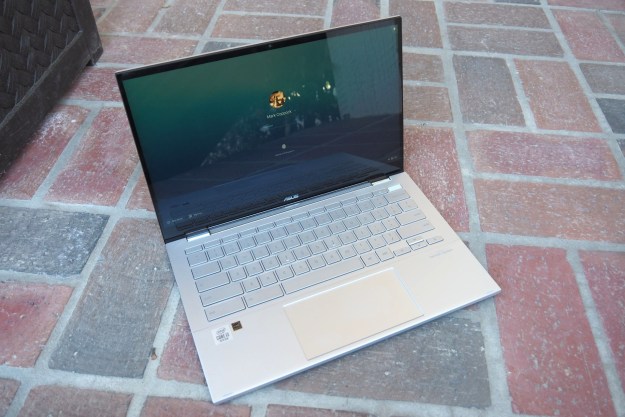 Chromebooks were once cheap laptops, and nothing more.

Now, the next generation of Chromebooks has begun to arrive, and they have their sights set on the best laptops for mid-range shoppers. The $800 Asus Chromebook Flip C436 is the first of this new class, and it’s not messing around.

Many early Chromebooks were budget options with build quality to match. That has been changing over the years, with an increasing number of premium Chromebooks that match the best available on other platforms. The Chromebook Flip C436 is one such laptop, enjoying an all-aluminum chassis that feels eminently solid in hand. No bending, flexing, or twisting here. It’s as solid a build as you’ll find on any Windows 10 laptop, some that cost hundreds of dollars more.

Unlike the Chromebook Clip C434 that preceded it, the C436’s hinge opens smoothly with one hand. It’s not wobbly though. The display doesn’t shake in clamshell, presentation, tent, or tablet modes.

It’s also relatively modern in its aesthetics. The bezel is reasonably small except for the large chin at the bottom of the display, with an 85% screen-to-body ratio. That doesn’t match Asus’s ZenBook line that goes up to 97%, but it’s much better than the Google Pixelbook Go and many other Chromebooks, which have been slow to follow the trend.

The silver color is conservative but attractive, with very little bling except for the chrome hinges and Asus logo on the lid. If you want more panache, Asus also sells an “Aerogel White” option with a rainbow effect on the lid.

If you were to cover the Chrome label, you’d never know this was a Chromebook. That has been true of other recent Chromebooks as well, demonstrating that Chrome OS have grown up — they’re just as good looking and well-built as all but the most premium Windows 10 and MacBooks.

The Chromebook Flip C436 is light at about 2.5 pounds and, again thanks to the small bezel, fits into a reasonably petite chassis for a 14-inch laptop that’s also thin at 0.54 inches. The Google Pixelbook Go is smaller, slightly lighter, and a tiny bit thinner at 0.5 inches, but the difference isn’t profound.

Connectivity is one area where the Chromebooks tend to have been restricted in the past. For the first time, Chromebooks are beginning to feature the latest standards such as Wi-Fi 6 and Bluetooth 5.0. That goes a long way toward making the Flip C436 a legitimate Windows replacement.

In terms of ports, though, things are still a bit limited. USB-C 3.1 has become universal in , and the Flip C436 has two. However, faster and more powerful technologies like Thunderbolt 3 still aren’t supported by Chrome OS. At $800 is around where 3 starts to show up in Windows .

There are no USB-A or HDMI ports to be found, meaning that you’ll be relying exclusively on dongles and connectivity will be limited to just the two ports unless you take advantage of a USB hub. The Flip C436 does, though, have a MicroSD card reader and a 3.5mm audio jack.

The keyboard uses a standard Chromebook layout, but the typing experience itself stands out. The Flip C436 features oversized keycaps and 1.2mm of travel, with a snappy feel and a soft bottoming action that makes for comfortable touch typing.

Next, the wide-format touchpad is responsive and supports the full range of Chrome OS multitouch gestures. It is glass where the previous version was plastic, giving it a smoother feel. There’s also a touch display, which is great for scrolling long web sites with a thumb and tapping pop-up buttons.

Finally, I didn’t get a chance to check out the active pen that’s available for the Chromebook Flip C436 — that’s an add-on option that didn’t arrive with my review unit. However, the availability of an active pen is de rigueur for 2-in-1s, and it’s great that Asus at least offers it as an option.

Display quality is another important performance factor, and the Chromebook Flip C436 satisfies. I couldn’t use my colorimeter to test the display given a lack of Chrome OS support, but I found it to be bright enough for my indoor use. It will struggle under direct sunlight, but so will most screens that max out around 300 nits.

Contrast seemed sufficient as well, with black text and white backgrounds that made my writing tasks a breeze. It’s a Full HD display and so just sharp enough on the 14-inch panel, but it wasn’t as good as displays on some other recent Chromebooks. The display on the Google , for example, is much nicer.

The Flip C436’s advantage, of course, is being a 2-in-1. Flipping it around to media mode and watching Netflix is a pleasure. The speakers won’t blow you away, but they’re loud enough for a medium-sized room and don’t distort at full volume. The bass is almost completely lacking, of course, as it is with many .

Chrome OS is a very efficient operating system, and it doesn’t put nearly the strain on processors as do Windows 10 and MacOS. Only a very anemic, low-power CPU like an older Intel Celeron can slow it down.

The Chromebook Flip C436 doesn’t have anything like that. Its dual-core, 10th-gen Core i3-10110U wouldn’t be the quickest for a Windows or Mac, but it’s plenty of power for Chromebooks. Throw in 8GB of and a 128GB PCIe SSD — no slower eMMC storage here — and you have a Chromebook that, in theory at least, should be able to keep up.

For $200 more, you can even add a quad-core processor to the mix.

The Chromebook Flip C436 definitely keeps up with anything you’ll want to throw at it. I opened scads of tabs in Google Chrome and couldn’t get it to slow down, no matter how many apps I loaded in the background. I’m sure I could have found a combination that would have caused some hesitation, but simply put, you won’t easily tax the system.

It’s the fastest Chromebook we’ve seen at 97 in the Speedometer 2.0 benchmark. And just imagine — for $200 more you can score a quad-core Core i5-10210U, and you can configure up to 16GB of and a 512GB SSD. Yes, this very fast Chromebook can be even faster if you want to throw a little more cash at it.

That investment may not be worth it, though, unless you need tons of storage. You’d have to open a ton of apps and tabs to exceed 8GB of , and a quad-core Core i5 is likely overkill for everyone other than programmers and developers.

Speaking of that, you can run modern Android games on the Chromebook Flip C436. The Intel UHD graphics can keep up, and the ones I tried — such as Asphalt 9 — were smooth and enjoyable. Flip into tablet mode and use the touch display and, although it’s a bit heavy, you can play games just like you would on an tablet.

Battery life is another strength — although it was significantly lower before I updated it to the latest version of Chrome OS. That proves that Google’s OS isn’t immune to the same kinds of problems we sometimes see with Windows 10 and MacOS.

Although the Flip C436 suffers from equipping only 42 watt-hours of battery life — down from the 48 watt-hours in the C434 — it still provides solid battery life. I’ll note that it wasn’t as strong in our demanding Basemark web benchmark test at just under three and a half hours, where some other Chromebooks achieve better longevity. The Google , for example, ran for more than four hours.

The processor was pegged at full speed during our Basemark battery test, with the fans running consistently.

The reason for the mediocre battery life in the Basemark test seems to be that the Core i3 was pegged at full speed, with the fans running fairly consistently. That happened as well in the web browsing test prior to the Chrome OS update, and I’ll add that it’s a little weird to hear fans when running a Chromebook — most are fanless, which just isn’t possible with this caliber of processor.

The Chromebook Flip C436 isn’t inexpensive at $800, and it’s not meant to be. There are plenty of cheap Chromebooks available, but few offer this level of performance and build quality. The battery life was enough to elevate the Flip C436 to a solid score and leverage what’s a traditional strength of Chromebooks.

It has a few advantages over the , but the $150 difference in price between base models is tough to justify. You give up the 2-in-1 flexibility but gain a better display, more attractive design, and slightly better battery life.

Another competitor is the Acer Chromebook 13. You won’t get quite the same quality build, but it does come with a higher resolution 13.5-inch screen at 2,256 x 1,504. You’ll spend $700 for a dual-core processor but storage drops to just a measly 32GB.

If Windows 10 is more your bag, then you can consider the $850 Asus ZenBook 13 UX333 with an 8th-gen Core i5 and a better display. And the Asus build quality is there as well, along with even smaller bezels and a nifty LCD numeric keypad built into the touchpad.

The Chromebook Flip C436 is solidly built and feels like it will last forever, and its components should keep up with years of Chrome OS updates. The single year of warranty coverage is disappointing as well, but Asus does throw in its usual accidental coverage protection for a full 12 months.

Yes. The Chromebook Flip C436 is fast, well-built, and earns its premium price.

Topics
Best HP laptop deals: HP Envy, HP Spectre x360, and more
Best Apple Deals: Save on AirPods, iPads, MacBooks and more
Best Chromebook deals: Get a new laptop from $114
Best 17-inch Laptop Deals: Get a large laptop for $330
You’ll be surprised how cheap this 27-inch QHD monitor is today
We now know how Apple’s VR headset may handle video, and it’s pretty awesome
The first RTX 4080 laptops are much cheaper than we expected
Intel targets RTX 3060 takedown with Arc Alchemist price cut
Perfect for school, this 14-inch laptop is discounted to $150 today
One of the best HP laptops you can buy is $250 off right now
Samsung’s 49-inch Odyssey G9 gaming monitor is $600 off today
GPU prices and availability (February 2023): how much are GPUs today?
The best PC power supply for 2023