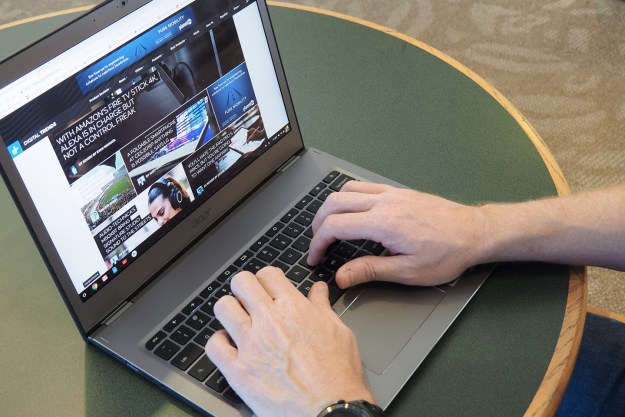 “The Chromebook 13 is a fast Chrome OS notebook, but its build quality and battery life don’t impress.”

Chrome OS has gained some innovative and high-quality additions lately, and most of them have focused on offering 2-in-1 flexibility. That hasn’t stopped Acer from introducing a boring old clamshell notebook, though. The new Chromebook 13 focuses exclusively on performance and build quality and hopes to prove that Chrome OS can be a good traditional clamshell choice.

That’s a hefty price for a Chromebook notebook, to go along with an unusually powerful CPU for the platform. Is it enough to carve out space for the Chromebook 13 in an increasingly crowded market?

The Chromebook 13 looks a lot like a midrange notebook from a couple of years ago. It’s an all-metal build that’s not quite at a premium level – the lid and keyboard deck are a bit bendy, and the display flexes with minimal pressure. One difference from a premium notebook like the HP Spectre x360 13 is that it sports a unibody construction that ups the rigidity, which budget notebooks — the Acer Chromebook Spin 11 is another example – often don’t enjoy.

The silver-gray color scheme is very conservative, with only some chrome accents on the edge of the keyboard deck and around the touchpad giving some aesthetic flair. The Chromebook 13 is a notebook that’s going to get lost in a very good looking and modern crowd including the likes of the Google Pixelbook and the HP Chromebook x2.

Further detracting from a modern appearance are rather thick bezels surrounding the display (common among Chromebooks today), and that contributes to a notebook that’s not nearly as small as other 13-inch notebooks like the Dell XPS 13 with its minimal bezels — though that trend hasn’t yet come to Chromebooks that we’ve seen. The Acer Chromebook 13 is also a relatively thick 0.67 inches and heavy 3.5 pounds, coming in much thicker and heavier than the Pixelbook (0.40 inches and 2.4 pounds and Samsung Chromebook Pro (0.55 inches and 2.38 pounds).

Given its price, we’re disappointed that the Chromebook 13 doesn’t have a touch display.

We’ll also note that the Chromebook 13 is unusual among Chrome OS machines in that it has vents along the bottom and rear edge for moving air into and out of the chassis to keep things cool. We’re used to Chromebooks being fanless and dead silent thanks to low-power CPUs, and so it was a bit of a surprise to hear the fan spin up when our benchmarks challenged the Core i5.

The Chromebook 13 has good connectivity that’s both futuristic and legacy-oriented, with a pair of the increasingly ubiquitous USB-C 3.1 port and a USB-A 3.1 for legacy devices. Some newer Chromebooks, like the HP Chromebook x2, are featuring only USB-C connections. There’s also a microSD slot for storage expansion – always a plus for Chrome OS – and a 3.5mm audio jack. Wireless connectivity is provided by 2×2 MU-MIMO 802.11ac Wi-Fi and Bluetooth 2.2 radios.

Getting data into this 2-in-1 is pleasant and efficient

The Chromebook x2 is also old-school in its input options. There’s a typical island keyboard with black chiclet keys, and it provides a snappy feel with enough travel that the bottoming action isn’t too abrupt. We’d prefer that the keys required just slightly more pressure to register, but that’s a quibble. The keyboard is in the standard Chrome OS layout with zero surprises, and the backlighting is uniform with the usual five brightness levels. That kind of fine control is common to the platform and beats out Windows notebooks that have only three levels.

The touchpad is a little small, and that’s a shame because there’s plenty of room on the keyboard deck for a larger version. It’s nice and smooth though and allows for the precise use of the full range of Chrome OS multitouch gestures. The separate buttons provide a sharp click and aren’t too loud for a quiet room.

That’s all you get regarding input options, though. There’s no touchscreen, which is increasingly common even on clamshell notebooks. We’ve become accustomed to quick taps for clicking buttons and using our thumbs to swipe up and down on web pages, even on many Chromebooks. We’re disappointed that Acer didn’t include a touch display on the Chromebook 13, particularly given its relatively high price – and that exacts a toll when it comes to touch-oriented Android apps.

Acer built the Chromebook 13 around a 13.5-inch high-resolution (2,256 x 1,504 or 201 PPI) IPS display that’s in the productivity-friendly 3:2 aspect ratio. That means it’s slightly taller than the more common 16:9 aspect ratio and so shows more vertical information on the screen at once. That also means there’s some letterboxing when watching videos, but it’s a tradeoff that makes sense.

We can’t test the display using our colorimeter thanks to driver limitations with Chrome OS, but that doesn’t stop us from providing a subjective evaluation. To our eyes, the Chromebook 13 utilizes an excellent panel that’s almost too bright – only the brightest sunlight directly overhead can defeat it – and that provides excellent contrast. Colors popped as well and they seemed accurate, and we can’t complain about the display’s gamma.

No matter how we used the Chromebook 13, including watching Netflix and YouTube, working in productivity apps, and surfing the web, the display provided an excellent experience. It’s easily the equal of the great displays on the HP Chromebook x2 and the Google Pixelbook, and it beats out the display on budget Windows 10 notebooks like the one on the Asus ZenBook 13 UX331UA.

This is the fastest processor we’ve used in a Chromebook 13, and it shows.

The audio was less impressive, with two bottom-firing speakers providing sound that wasn’t terribly loud. There was little distortion at full volume, which is a plus, and mids and highs were satisfactory. But the lack of bass meant you’ll want to pull out a pair of headphones to fully enjoy your tunes and Netflix binges.

We’re limited in how thoroughly we can benchmark Chrome OS devices, but one thing became clear as we conducted this review. The Chromebook 13 is a super-fast Chrome OS notebook thanks to its relatively high-end 8th-generation quad-core Intel Core i5-8250U CPU.

This is the fastest processor we’ve used in a Chromebook 13, and it shows. We ran the Android version of Geekbench 4 and saw a single-core score of 4,275 and a multi-core score of 8,792. That’s faster than any other Chromebook we’ve tested and rivaled Windows 10 notebooks, such as the Asus ZenBook 13 (4,119), in the single-core test.

We’re sure that the 64GB of eMMC storage is slower than solid-state drives (SSDs) in other machines like the Pixelbook and most Windows 10 notebooks in this price range. But no matter – the Chromebook 13 suffered from no noticeable delays when opening apps and saving files.

Chrome OS is also a relatively lightweight operating system, and the Chromebook 13 whips through everything the platform can throw at it. The interface was lightning-quick, there were no apps that caused an appreciable slowdown, and the notebook multitasked like a champ thanks to its spacious 8GB of RAM.

You can certainly game on the notebook, as every Android title we tried out was fast and smooth. Of course, you’ll be stuck with using the keyboard and maybe a mouse, but there isn’t a game that you can run that’s likely to defeat the Intel UHD 620 graphics built into the CPU.

Simply put, you won’t find a faster Chrome OS machine than the Chromebook 13. If speed is what you crave, then this is the one for you.

Battery life doesn’t live up to the Chrome OS promise

There’s a reasonable 54 watt-hours of battery capacity packed into the Chromebook 13’s chassis, and that coupled with the general efficiency of Chrome OS should promise solid battery life. The display is higher resolution, though, and the CPU is more powerful than usual, and so we were looking forward to seeing how battery life would hold out.

When browsing the web, the Chromebook 13 lasted for eight and a half hours compared to the Chromebook x2 at a full hour longer, while the Acer Chromebook Spin 15 lasted for 11 hours. Simply put, Acer’s speedy Chromebook couldn’t manage nearly the same kind of longevity that we’re used to seeing with Chrome OS. Even Windows 10 machines with similar processors and similar battery capacities lasted longer, including the ZenBook 13 and XPS 13 that each lasted for over 10 and a half hours.

Finally, in our video looping test that plays an Avengers trailer until a machine shuts down, the Chromebook 13 lasted for just over nine hours. Once again, that’s low compared to the Chromebook x2 and the Pixelbook with smaller batteries, and the ZenBook 13 crushed the Chromebook 13 at 13 and a half hours.

Overall, you may be hard-pressed to get through a full workday with the Chromebook 13, at least compared to other Chrome OS devices we’ve tested. You’ll get everything done much faster, of course, but you’ll pay the price in longevity.

The Chromebook 13 offers one very compelling feature: It’s among the fastest Chromebooks you’re likely to find on the market today. And if you’re looking for a traditional clamshell and don’t care about flipping the display around or detaching the keyboard – or using your finger to tap and swipe on something other than the touchpad – then the Chromebook 13 will give you the speediest performance. But that’s pretty much it, which isn’t a lot for the $800 Acer is asking.

If you’re looking for a premium Chromebook today, then that means you’re going to be looking primarily at 2-in-1s. The Chromebook 13, in fact, is the only traditional clamshell Chrome OS notebook we can think of that’s not a budget-oriented offering.

And when it comes to Chrome OS 2-in-1s, the Chromebook 13 faces some stiff competition. First to mind is the HP Chromebook x2, a detachable tablet with a very sturdy keyboard base that works well as a clamshell. It’s slower than the Chromebook 13 and isn’t quite as robustly configured, with an Intel Core m3-7Y30 CPU, 4GB of RAM, and 32GB of eMMC storage. But it’s also less expensive at $600, and it’s better looking and better built.

You could also flip to Windows 10 and consider the Asus ZenBook 13 UX331UA. It’s a 13.3-inch clamshell with equal or maybe slighter better build quality to the Chromebook 13 – it’s perhaps just a bit less bendy – and it’s built around the same Core i5 CPU with 8GB of RAM. The ZenBook 13 performs similarly to the Chromebook 13 running the more demanding Windows 10, and it offers significantly better battery life, all for the same $800.

The Chromebook 13 is solid enough to evoke confidence in its ability to last through the usual office productivity or student workload and abuse. And it has relatively fast and up-to-date components, meaning it will keep up with Chrome OS for some time to come. The one-year warranty is standard and, as usual, less than we’d like to see.

No. It’s a very fast Chromebook, that’s for sure. But its battery life doesn’t keep up with Chrome OS’s promise, and it doesn’t offer the flexibility of the 2-in-1s that are often available for less money.

Best Chromebook deals: Get a new laptop from $99
This stunning DIY gaming PC dream machine is made of glass
The best laptops you can buy in 2022
Asus launches world’s lightest 14-inch laptop with monster battery life
The best Cyber Monday gaming laptop deals for 2022
The best Cyber Monday MacBook deals for 2022
Dell Cyber Monday deals: Save on Dell XPS 13, gaming laptops
Apple Cyber Monday Deals: Apple Watch, AirPods, iPad, MacBook
This Alienware gaming laptop with an RTX 3080 just got a bit cheaper
This Dell gaming laptop just got a big price cut — now $700
How to recall an email in Outlook
This Alienware gaming PC with an RTX 3080 Ti is $580 off right now
Almost a week after Black Friday, the Dell XPS 13 laptop is still $250 off