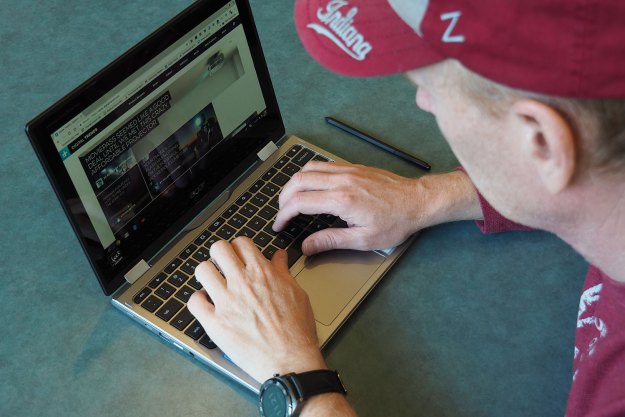 “Acer’s Chromebook Spin 11 is inexpensive, but poor performance holds it back.”

Though more premium options keep popping up, Chromebooks were always meant to be a cheap alternative to Windows and Mac. So, if your budget is under $500 for laptop, they are a great place to start.

Chrome OS is an increasingly popular platform for users with relatively light computing needs, but does the Chromebook Spin 11 bring enough 2-in-1 functionality to the table?

While commercial versions of the Chromebook Spin 11 are designed to meet the rigors of MIL-SPEC 810G certification, our review unit was a consumer model with a thinner, lighter, and less robust build. That’s not to say it’s poorly built, and in fact, that’s not the case — outside of some minor flex on the bottom of the chassis, the Spin 11 is solid enough for the price. But some competitors, such as the Asus Chromebook Flip C101PA, offer metal chassis that offer a little bit extra for the money.

At the same time, both 2-in-1s have hinges that in our testing reliably allowed the displays to flip all the way around to a tablet format. The Spin 11’s hinge, in particular, was firm enough to hold the screen in place no matter the mode, whether clamshell, tent, media, or tablet.

Generally, the Chromebook Spin 11 is more than robust enough for a casual home user who’s looking for an inexpensive 2-in-1, and its light plastic chassis (2.76 pounds) is easy enough to carry around. It’s not the thinnest notebook at around at 0.79 inches, which given its smallish frame makes it seem like a rather chunky little machine. Once again, we’ll compare to the Chromebook Flip, which sports a 10.1-inch display and so is smaller, thinner at 0.6 inches, and lighter at just two pounds.

Comparing the Spin 11’s performance to other Chromebooks left us decidedly unimpressed.

Regarding its aesthetics, the Chromebook Spin 11 isn’t going to win any awards, but neither is it an embarrassment. The newest version has a silver cross-hairline pattern on the lid that gives it a slightly more premium texture and appearance, but otherwise, this is a simple silver-gray design that’s rather mundane.

The Chromebook Spin 11 serves up the typical island keyboard with black keys and white lettering, and as mentioned earlier it’s spill-proof and so can withstand the occasional splash of water. The key mechanism offers plenty of travel with a soft bottoming action, but there’s less tactile feedback than we like resulting in a bit of a spongy feel. It’s typical for the class of machine, with the slightly more expensive Asus Chromebook Flip C302C offering a similar feel.

The touchpad is large relative to the available space on the small keyboard deck, and it provides a smooth and precise feel. General cursor control was just fine, with Chrome OS gesture support and good control over the platform’s most important environment, the Chrome browser.

Next, there’s an included Wacom EMR stylus that allows for taking notes, creating sketches, and generally doing all of the inking that Chrome OS supports. It’s not quite as complete an experience as you’ll find with Windows 10 Ink, but it’s nevertheless a nice value-add. Also, performance in Chrome OS apps was fine, but there was some lag when inking in Android apps like Microsoft’s OneNote. The stylus is unpowered and durable.

The display was fine for basic productivity, but its multimedia performance disappoints.

Notably, there’s no biometric login support, and so you’ll be relegated to typing in your Google account password. The touchscreen display is responsive and provides a satisfying experience when running Android apps, which are now available to download on all new Chromebooks.

A small display that’s not too sharp

The Chromebook Spin 11 gets its name from the 11.6-inch IPS panel that runs at a native resolution of 1,366 x 768, or 135 PPI. That means you’ll see some pixels in text and graphics won’t be the sharpest, and you won’t be able to enjoy Netflix at Full HD quality. And the extremely large bezels mean that the display seems even smaller than it is. Ultimately, this is what you’re going to get at this price point, as the very similar display on the Asus Flip C101 demonstrates.

The audio was equally underwhelming, with just enough volume but some distortion and a muddied experience when things are turned all the way up. Sound quality is fine for a quick YouTube video, but you’ll want to pull out some headphones for music, movies, and TV.

The Chromebook Spin 11 uses a Celeron N3350 CPU, a low-end dual-core processor that runs at a base clock of 1.1GHz and tops out at 2.4GHz. We can’t run our usual battery of benchmark tasks on Chrome OS machines and so comparing to similarly equipped Windows machines is difficult.

Battery life was very good for productivity tasks, allowing for a full day at work or at school.

But comparing the Spin 11 to the similarly priced Asus Flip C101, not to mention slightly more expensive options like the Asus Flip C302, left us decidedly unimpressed. Chrome browsing was speedy enough with a handful of tabs open, but despite the generous 4GB of RAM, things slowed down significantly when we hit 10 or more tabs. Chrome OS apps like Google Docs were a bit sluggish on occasion, with intermittent lag when typing and editing.

Also, Android apps were particularly slow. That’s not the Spin 11’s native platform, of course, but we’ve seen better performance on many other Chromebooks. While the Asus Flip C101 was a similar performer, the $550 Samsung Chromebook Pro with its Intel Core M3-6Y30 CPU was significantly speedier when running .

The Spin 11 was equipped with 32GB of eMMC storage, which isn’t nearly as fast as the solid-state disks you’ll find in Windows and MacOS notebooks. It’s plenty fast for Chrome OS, though, and we didn’t find accessing files to be a bottleneck. There’s 19.7GB free after Chrome OS is accounted for, and users can expand storage via the micro SD card reader.

While we were disappointed with the Spin 11’s performance, the combination of the Celeron CPU and small, low-res display provided more mixed results when it came to battery life. According to Acer, the 37 watt-hours of battery capacity should go for around eight hours when browsing the web and around 13.5 hours when playing video.

When running general productivity tasks, the Spin 11 mostly lived up to Acer’s expectations. On our most demanding Basemark web benchmark test, for example, it ran for almost four hours, which is considerably less than the almost six and a half hours scored by the Asus Flip C101 but roughly equal to the Acer Chromebook 15’s.

On our web browsing test, the Spin 11 exceeded Acer’s expectations, flipping through a variety of sites for more than nine hours before running out. The Flip C101 managed just eight hours while the Chromebook 15 was more impressive at eleven and a half hours.

Finally, on our video test that loops through an Avengers trailer with the display set at 100 lux until the battery dies, the Spin 11 was less impressive at just a bit under 10 hours. That’s less than Acer estimated, and it beat out the Flip C101’s roughly nine hours but fell flat against the Chromebook 15’s nearly 12 hours.

Overall, we found battery life to be very good for productivity tasks, allowing for a full work or school day away from a charge. The Spin 11 wasn’t as long-lasting for watching video, but almost 10 hours of binging isn’t exactly a terrible result — as long as you can live with the mediocre display, of course.

The Acer Chromebook Spin 11 is a low-cost and reasonably solid Chrome OS notebook, with decent battery life and competent input options. Its performance and display were underwhelming, though, and there are better options for the same or just a bit more money.

The Asus Chromebook Flip C101 is a bit less expensive than the Flip 11, coming in at $300 for a configuration with a Rockchip six-core CPU, 4GB of RAM, and 16GB of eMMC storage. You’ll get slightly better performance and less battery life with the Flip 11, but you won’t get stylus support.

If your budget isn’t quite so tight, you could consider the Samsung Chromebook Pro at $550 for an Intel Core M3-6Y30 CPU, 4GB of RAM, 32GB of eMMC storage, and a much higher resolution (2,560 x 1,600) display. Performance will be much better, and battery life will be similar. Once again, though, you’ll be giving up the ability to write on the display.

Finally, you could allocate some additional funds and go for the upcoming Acer Chromebook Spin 13 that will offer a crazy-fast Intel Core i5-8250U quad-core processor, up to 16GB of RAM, and a 13.5-inch 2,256 x 1,504 resolution display in the productivity-friendly 3:2 aspect ratio. Pricing on that machine isn’t available yet and is guaranteed to be higher, but it’s likely worth the investment if you can swing it.

The Chromebook Spin 11 is a solidly built 2-in-1 with a year’s worth of warranty protection and future-proof connectivity. Its performance is lacking, though, meaning that you might run out of headroom sooner than you’d like.

No. The performance is just too lackluster to make it good for anything other than simple web browsing, and that’s just not worth even the $350 you’ll spend on this 2-in-1.