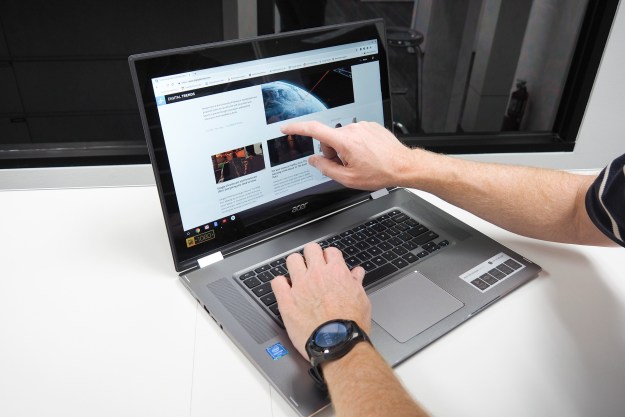 “The Chromebook Spin 15 lets you keep working and watching video all day long.”

There’s a new wave of thin, light, and premium Chromebooks on the way that are elevating the platform beyond the budget space it’s mostly occupied since Google first whipped up Chrome OS. But that doesn’t mean that notebook manufacturers are giving up on offering larger and less-costly versions, and Acer’s Chromebook Spin 15 is a powerful case in point.

We looked at the full-size 2-in-1 with an Intel Pentium N4200 CPU, 4GB of RAM, and 64GB of eMMC storage. This version of the Chromebook Spin 15 retails for $450, putting just beyond bargain-basement pricing but still lower than the $600 point at which Chromebooks start to inch into premium territory. It’s essentially a flip-around version of the $400 Acer Chromebook 15 clamshell.

The Chromebook Spin 15 is a very large 360-degree convertible 2-in-1 that doesn’t put as much of a dent in your wallet. Can it carve out a place in the increasingly upscale and diminutive Chromebook market?

Large and in charge, not necessarily in a good way

Okay, let’s be blunt: The Chromebook Spin 15 is huge. Yes, all 15-inch notebooks are relatively large, but Acer made this 2-in-1’s bezels massive by modern standards. That stretches the chassis out in its width and depth, making it comically large compared to a diminutive 15-inch notebook like Dell’s (admittedly premium) XPS 15.

In these dimensions, the Chromebook Spin 15 is even larger than Acer’s budget-oriented Aspire E 15, and we considered that a hefty notebook. Maybe unsurprisingly, the Spin 15 is similarly sized to the Acer Chromebook 15, being just slightly wider and deeper.

Interestingly, the one dimension where the Chromebook Spin 15 isn’t as massive is in its thickness, which is a very reasonable 0.79 inches. It’s not too heavy either, at 4.63, although that’s thanks primarily to a chassis that’s made mostly of plastic. The (overly-expansive) aluminum keyboard deck is reasonably flex-free, as is the soft-touch chassis bottom. However, the lid is quite bendy and it gives in too easily to pressure from above. The Aspire E 15 is heavier at 5.27 pounds and thick at 1.19 inches, but it also struck us as more robust.

The first thing you might notice on is just how small the keyboard looks amidst a sea of aluminum.

If you have a lot of desktop space (or a large lap) then you might not mind the Chromebook Spin 15’s overall size. That is, until you spin the display around into tablet mode — which takes a surprising amount of force thanks to the overly tight hinge. You’ll find yourself chuckling out loud at how much effort it requires. You won’t be using this one as a slate in the crook of your arm.

The 360 degree hinge does have a purpose though: Prop it on your lap with the display flipped around in media mode and you can enjoy some Netflix without the keyboard getting in the way.

Aesthetically, the Chromebook Spin 15 looks like the plastic notebook it mostly is. Acer adorned the lid with a crosshatch pattern that doesn’t fool us into thinking it’s an etched metal, and the dark silver color carries over to the keyboard deck and bottom of the chassis. Some chrome accents add a little panache, but overall this is a conservatively styled notebook that won’t be winning any beauty contests.

Acer put all of those long sides to good use with plenty of connectivity, and unsurprisingly it’s a close match with the Chromebook 15. You’ll find two USB-C ports that support data, display, and charging, along with two USB-A 3.0 ports for legacy support. There’s also a microSD card to expand the notebook’s storage and a 3.5mm audio jack. Wireless connectivity is the usual 2×2 MU-MIMO 802.11ac Wi-Fi and a Bluetooth 4.2 radio.

The keyboard’s just okay, but why is it so small?

Open up the Chromebook Spin 15’s lid, and the first thing you might notice is just how small the keyboard looks amidst a sea of aluminum. Yes, the standard backlit chiclet keyboard isn’t tiny, but there’s room on that huge keyboard deck for a more spacious version, perhaps with a numeric keypad. Acer did the same thing with the Chromebook 15, and it’s a shame to have wasted all that space.

In any event, the keyboard mechanism has a nice click that adds some precision, but it’s not very deep. Keystrokes are a bit short and abrupt with a harsh bottoming action. We do wish there was a little more bounce. The keyboard is uniformly backlit without a lot of bleeding around the keys, and we liked the ability to choose from five levels of backlighting. You’ll get a better keyboard on premium machines like the $600 HP Chromebook x2, but this one is good enough.

The touchpad was precise and large enough to comfortably support the usual Chrome OS multitouch gestures. Of course, this is a 2-in-1, and so the display supports touch, and it worked as well as the usual touch display. There’s no active pen, however, which is disappointing on one hand but then again, this is a massive notebook to use in tablet mode unless it’s simply sitting flat on a desk.

A display that can’t quite move beyond mediocre

To begin with, the Chromebook Spin 15 has a 15.6-inch display at Full HD (1,920 x 1,080 or 141 PPI). That’s become more common for budget notebooks, and it’s an improvement over the 720p displays of a few years ago. It’s not quite as sharp as we like, though it is an IPS panel, meaning it’s viewable at some extreme angles.

We couldn’t subject the display to our usual colorimeter tests, and so our impressions are all subjective. Overall, we found the display to be bright enough to use in our typical office environments, although we wouldn’t recommend taking it outside into direct sunlight. And contrast was decent but not up to the standards of some slightly more expensive notebooks like the HP Chromebook x2.

Colors appeared a bit muted, and the gamma seemed a touch too dark. That made viewing images and video less than the best experience. And it’s a shame because flipping around that display for enjoying Netflix would have been a lot more pleasant had things been a little more natural. Once again, the HP Chromebook x2 and another premium machine, Google’s Pixelbook, provide much better displays.

The dual speakers that flank the keyboard are loud enough to fill a small room, and they don’t distort until you crank them all the way up. Mids and highs are sufficient for the occasional video, although the bass is missing as usual and so music in particular suffers. Because the speakers fire up from the keyboard deck, they fire down when the tablet is in media mode and are thus slightly muffled. Overall, keep a pair of headphones handy for music and movies.

Such a large notebook should feel faster

The Chromebook Spin 15 uses an Intel Pentium N4200, a dual-core CPU that runs at 1.1GHz and bursts to 2.5GHz. In other words, it’s not the fastest processor around. However, Chrome OS is generally undemanding enough that a slower processor can suffice for the usual web browsing, productivity, and media consumption.

That’s the case with this 2-in-1: Performance that’s good enough. But it’s not going to win any races against notebooks that are just a little faster and use Intel Core CPUs, like the Chromebook x2 and the Samsung Chromebook Pro. When measured against other relatively budget machines like our favorite 15-inch model, the Acer Chromebook 15, the Spin 15 performs right in line with our expectations.

Our usual suite of benchmarks won’t run on Chrome OS devices, and so it’s difficult to compare their performance to Windows 10 PCs. We did run the Android version of Geekbench 4 and saw a single-core 1,449 and a multi-core speed of 4,114, which fell slightly behind the 1,559 and 4,884 managed by the Pentium N4200 in the Acer Chromebook 15.

You won’t be picking this 2-in-1 up and using it as you would a gaming tablet.

In the Speedometer 2.0 web benchmark, the Chromebook Spin 15 scored 24.5, which is low even for a Chrome OS notebook. The Samsung Chromebook Plus V2 with its Celeron 3965Y managed a much faster 43.2, and the Chromebook x2 scored an impressive 75.1 You have to look at low-powered Windows 10 notebooks like the Asus NovaGo (10.3) and the Microsoft Surface Go (26.0) to see scores this low.

Despite some low benchmark scores, the Chromebook Spin 15 was fine for the usual Chrome OS-style web browsing and productivity apps. There’s only 4GB of RAM, though, so you’ll eventually hit a point where too many tabs and apps will slow things down. If you keep your expectations reasonable, though, you won’t be disappointed with the Chromebook Spin 15’s overall performance.

Although you can play Android games on it, you won’t be happy with the gaming performance. Action titles like Asphalt 8 were choppy at times. And that’s forgivable, really, because you won’t be picking this 2-in-1 up and using it as you would a gaming tablet. Other Android apps, like Outlook and OneNote, were perfectly usable.

Outstanding battery life will last you a long workday indeed

We weren’t told how many watt-hours of battery life Acer packed into the Chromebook Spin 15, but we weren’t expecting too much given the large 15.6-inch display. It runs Chrome OS, though, meaning it’s not stressed like Windows 10 notebooks and should demonstrate some enhanced efficiency.

In our battery testing, as it turns out, the Chromebook Spin 15 is a strong performer indeed. It managed a very strong performance in our Basemark web benchmark, churning through this aggressive test for about five and a half hours. That’s an hour longer than the Chromebook x2 and the Acer Chromebook 15.

You’ll get a full workday out of the Chromebook Spin 15. You’ll even be able to settle down for some Netflix after a hard day’s work without worrying about plugging in.

Yes, the Chromebook Spin 15 is a massive 2-in-1 — at least in width and depth — that makes a mockery of the tablet concept. But that doesn’t mean it’s not a good Chrome OS machine if you ignore the fact that the display swings all the way around. Just use it as a clamshell or in media mode for watching videos, and you’ll enjoy this economical and very long-lasting machine.

Step down to smaller devices, and you’ll find more options. For example, there’s the HP Chromebook x2 that costs $150 more but offers a much better (albeit smaller) display, significantly better performance, and it’s far easier to carry around. But it can’t match the Chromebook Spin 15’s battery life.

Then, you could look at a Windows 10 machine in the same basic price range. One good option is the Acer Aspire E 15, which will give you better performance, especially in gaming, to go with a better 15.6-inch display. You won’t get the same battery life, though, and you’ll be carrying around a bit more heft.

Although it’s mostly constructed of plastic, you won’t question the Chromebook Spin 15’s longevity thanks to a mostly solid build quality (just don’t press down too hard on the lid). The biggest question is this: Will the Pentium processor keep up as Chrome OS advances? Only time will tell. The one-year warranty is the industry standard.

Yes. If you’re looking for a 15-inch Chromebook, then this one is as good as any you’ll find for $450. The 2-in-1 flexibility adds just the slightest bit of value, but it’s enough to make the Chromebook Spin 15 a worthy purchase.